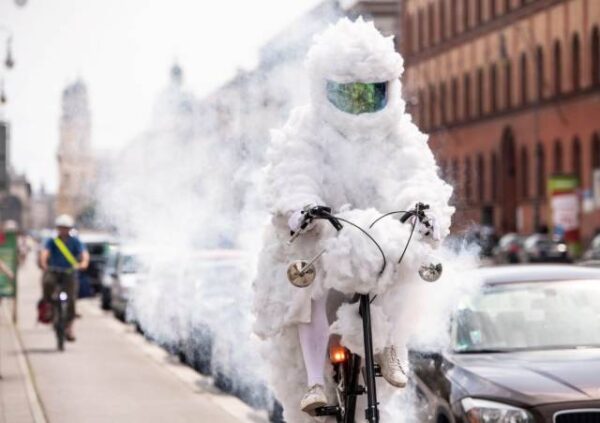 The main objective of trading is a reliable prediction of future movement of the currency pair. It includes the US dollar, reflecting global trends and the currency that depends on the state of the national economy. GDP and budget revenues of many countries depend on raw materials if it takes quite a large share of exports. It makes the national currency predictably dependent on the market value of minerals mined or grown/produced food.

On the other hand, in the Forex market there is such situation, when everyone, without exception, the currency has one common factor (interest rate of the leading economies in the world, trade wars, etc.). As a result, the trends diverge, and at this point it’s time to quite predictable subsequent movements of national currencies. In the review we will talk about how technically “see” these moments, to determine the entry points and trading strategy for the commodity currencies.

How to find a commodity currency? 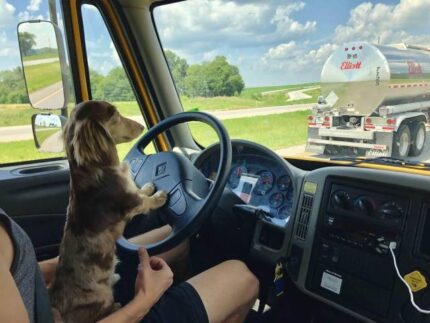 As mentioned above, the schedule of exports helps to determine a commodity currency. On the startup of the MIT Media Lab, you can obtain a fairly complete picture of any country in the world and instantly identify which product affects its GDP.

Click search (1), select country (2) and type of visualization (3). A more visual representation of the structure of exports is obtained in the mode Tree Map, but the service may issue a bubble chart, line charts etc. are Also a number of filters on specific goods and raw materials, which simplifies the search of large exporters.

The pictures below presents the balance of the oil, where it is clear that the United States exceeds the supply of Russia, but that doesn’t make oil-dependent us GDP.

To verify this, just look at the structure of exports of United States, it has a diversified budget revenue, as no articles of foreign trade, exceeding the proportion of 15%.

Commodity currency is the national currency of the country with a share of export of a single raw material more than 15%. The more the better “clears” recorrelate, thanks to which we are going to make money on the Forex market.

Pitfalls of choice of commodity currencies 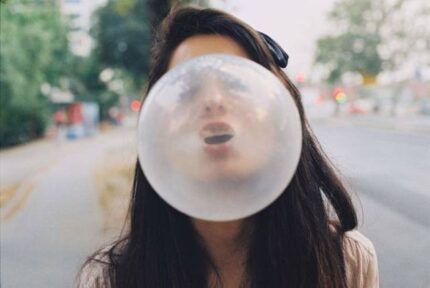 Strategy of trading currencies only works in liquid pairs that do not “fall through” to win domestic news. Regardless of the price of raw materials civil war or political crisis will lead to the fall of the national currency against the dollar.

Pay attention to the country of Burundi, where the export of coffee and gold has a share of 23%.

Both materials showed the following 2017 growth, especially skyrocketed the cost of coffee beans, but only Burundi franc lost its value.

For this reason, traders who trade USDRUB pair in correlation with the oil, sometimes notice how the dynamics of the ruble “refuses” from this relationship.

The most reliable type of instruments that are not experiencing problems with liquidity and local economic crises are the major currency pairs. To raw include the canadian, Australian and new Zealand dollar, the Swiss franc.

The economy of Alpine meadows, reliable hours and banks depends on the gold is not smaller than its African fleet to the state this proves the structure of exports.

Switzerland is engaged in processing gold and intermediary sales, helping some States to legalize the extracted raw materials. In the twentieth century, its services have been used by Germany during world war II and the USSR during the Cold war, not to mention countries in the Middle East, Africa and Latin America.

From gold exports is also dependent on Australia, although the export structure of the continent is heavily dominated by coal.

A large number of varieties of coal, the specific transportation and delivery, and relatively low liquidity – factors that reduce the very real effect of raw materials on the national currency. Traders do not consider its cost, which is evident from the comparison of three instruments: AUDUSD, gold and coal futures.

In the case of USDCAD high liquidity of a commodity, the dominant share of exports, is not an unambiguous argument for the impact of its value on the national currency. Budget revenues of Canada are uniquely dependent on foreign oil.

However, constructing a comparison chart and currency Nefteyugansk, we do not see any relationship between the quotes:

A pitfall here is that traders look at the U.S. economy, but it determines the growth in canadian oil exports, as sales of vehicles occupying a lesser share of foreign trade. A benchmark for flow forecast USDCAD is stock index S&P500.

Choosing “guide” to New Zealand currency also has pitfalls, the country is a leader in the supply of dairy products to international markets.

The value of the currency affect the quotes of the CRB index, representing a basket of goods collected and monitored by the company Commodity Research Bureau. 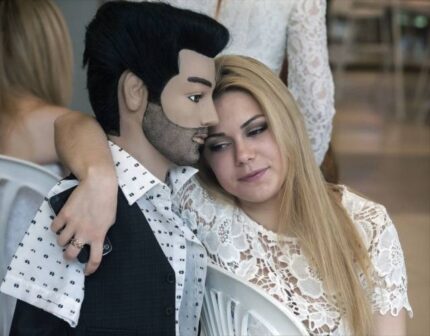 As noted above, the trading system uses a simple logic of the relationship between raw materials and growth of the national currency. There are two types of differences of value, which have different predictive value.

If the medium-term drop in the currency and raw materials begins to rise is a signal to search for the bottom and the opening of long positions in commodity currencies. The growth rate will occur for a number of reasons: increase budget revenues positive impact on the economy; the monetary policies of the Central Bank, receiving a large inflow of foreign exchange earnings; the actions of arbitrageurs, etc.

Valuing raw materials at a high value of the currency can lead to sharp falling. Currency speculators will thus react to the strengthening of the U.S. dollar, which, in turn, can grow to crisis expectations. In this case, it is possible to predict the subsequent drop in the price of raw materials due to reduced consumption amid economic stagnation.

Open two charts of the daily candles, one of which is the leading commodity, other currency pair. Add both the Bollinger Bands indicator with the period 200 and sync your candles on the days of the week. Additionally, in the indicator settings: 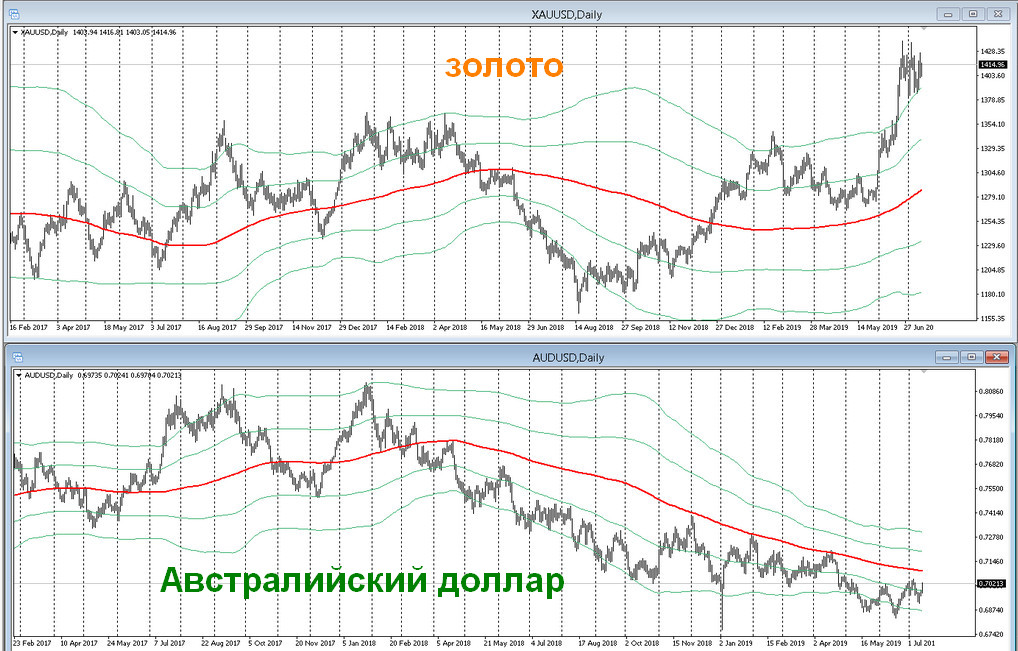 The signal to buy a currency pair occurs under the following conditions:

A mandatory condition of the transaction is the previous coincidence of trends, the quotes were in the same area below the moving average, and then the raw material started to rise, while the currency has lagged behind the trend.

The signal to sale of raw materials occurs at similar factors: 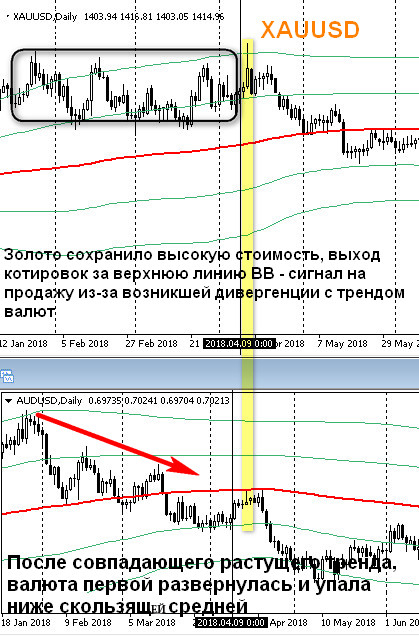 Points lock in profits there may be tape Bollinger. The entrance is better to split into several pieces and add at the time of retesting or a repeated intersection of moving averages from any tool, provided that current price of the new deal better than the previous entry. In fact we are talking about averaging positions.

The strategy does not provide specific stop loss level, the transaction may be kept until the disappearance of the imbalances: the currency and raw materials converge in the trend, being at the same time above or below the moving average. However, it is not recommended to bring the deal to a point, it can be unprofitable, given the cost of the accumulated swap.

In the case of trading opposite pairs, for example, the Swiss franc, instead of selling you should make a purchase in the moment when both tools above the moving average and the currency crosses the upper band. 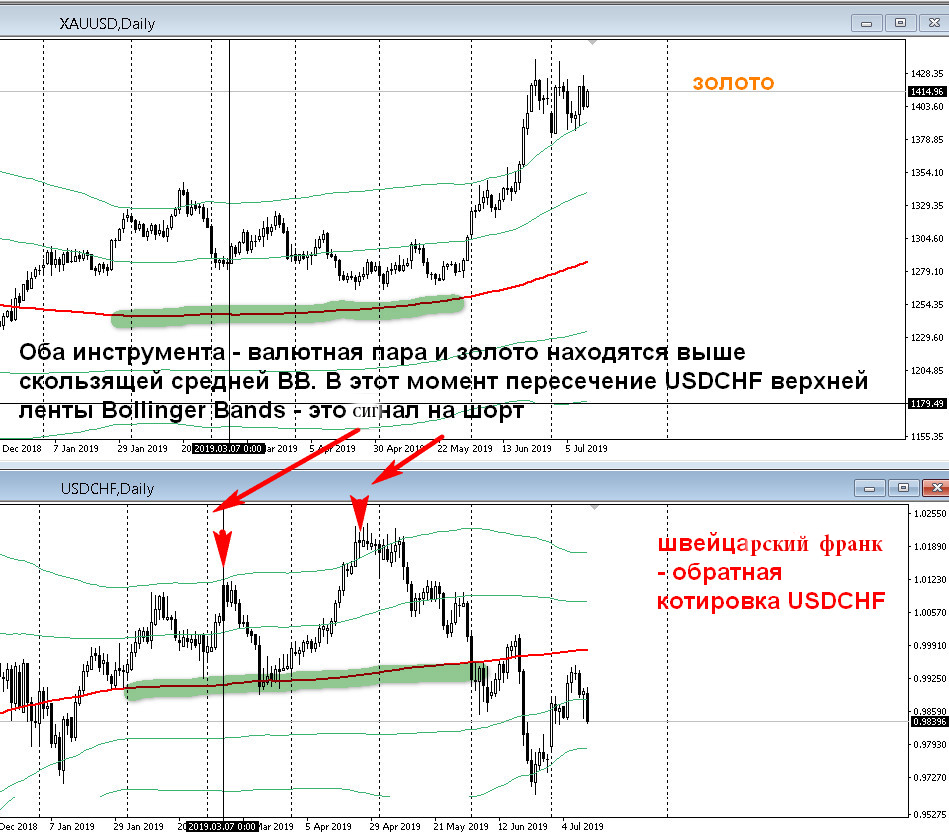 The situation of the strong franc and cheaper cost of gold is quite rare, so to buy precious metal is enough to both currencies was below the middle line, crossing the first belt deflection. 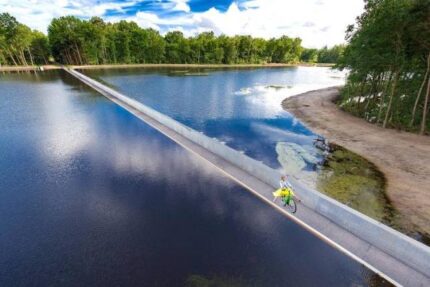 Despite the abundance of raw materials economies, in fact the model of assistance almost with absolute reliability only works on the major currency pairs. Divergence of gold and couples can use as a trading indicator, clearly showing the “total bottom” in the currency market Forex.

The adaptation of the indicator for smaller time frames it is important to keep a large period, and also to devise a system of money management, as the divergence on the hourly candles is often a duration of a few days.