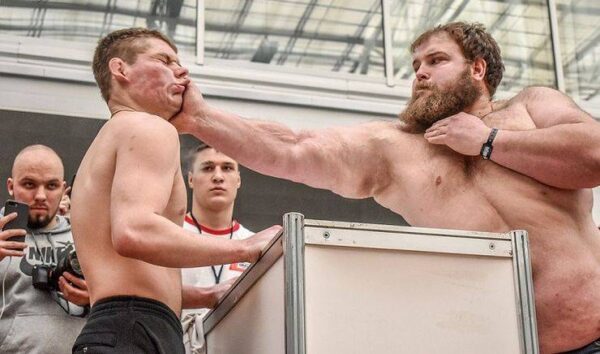 Hello, fellow traders! Have you noticed ever that the price, having a certain number of pips for the trading day, like exhaled like she’s “out of gas”?

Today we will talk about one interesting trading technique called “Equalizer”, which is not, in virtue of their nature, widely known and popular in Forex. However, its creation had a hand in the well-known trader Larry Williams.

The approach is simple to use and does not require the use of technical indicators. And the time it takes to trade can be as little as 10 minutes a day…

Characteristics of the strategy of “Equalizer” 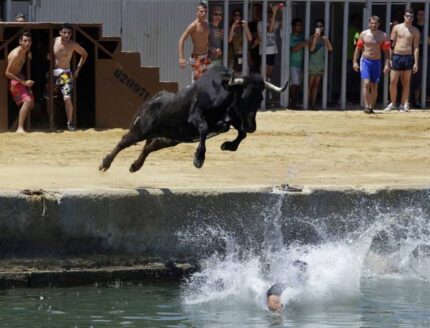 Forex has the highest liquidity among the other markets. This means that the currency is the most popular asset among financial and commodity instruments. Such situation has developed because of constant monitoring by Central Banks the value of national money. Officially they can manipulate exchange rates, and other financial instruments these actions are prohibited by law.

Liquidity in Forex provide foreign exchange reserves of countries and the statutes requiring the Central Bank to restrain the currency’s value according to certain rules of monetary policy. They also add to the uniqueness of the Forex market, where you can earn with the most dangerous strategy – trading against the trend.

Shock days in the Forex market 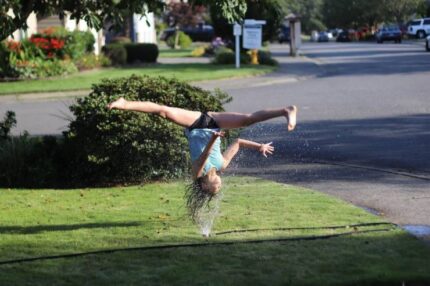 The concept of the impact of the recently introduced legendary Larry Williams is the author of the Williams R indicator, invented a system for analyzing COT reports, and the first traders with the opportunity to trade futures with a five percent yield.

Williams explored the many patterns of the market and determined that after days with high trading range (in other words, with a maximum increase or decrease at the end of the trading day) you can expect a reversal of quotes or the trend continuation. It is these moments and was called a shock of the day, however, no clear criteria of selection range changes in the value of instruments.

The trader was proposed independently to identify and then observe the behavior of the asset. The closing level of the subsequent candles had to indicate in which direction the trend or contratrend to place pending orders. Read more and more about this can be found in the famous book by Williams “Long term secrets to short-term trade.”

The proposed method is the countertrend strategy impact days much easier. If Larry Williams examined in more detail the Forex market, then he would be able to give a precise definition of the shock of the day.

Many traders know that the most liquid EURUSD rarely goes beyond the level of +/-1%. Points in the shock day Eurodollar can be calculated according to the methods described below.

For some reason, this level is almost constantly formed the “failure” of trading activity of large players take a break. Maybe it is a kind of trigger for Regulators, which track the dramatic changes in the exchange rate.

The frequency of the above phenomena was the basis contrarreloj strategy “Equalizer” for the most liquid pairs in the Forex market – the so-called “majors”. 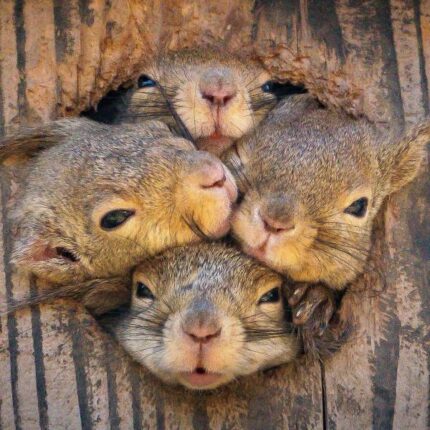 The strategy is the idea to catch the correction that occurs in excess of a couple of range of N points, is equal to the average daily volatility. The presence of such a large movement often indicates the emergence of a strong and sustainable medium-term trend, so the tactic does not involve holding a position for a long time — will go out at the end of the day.

The countertrend strategy uses pending orders buy and sell, which frees the trader from having to predict the trend direction. 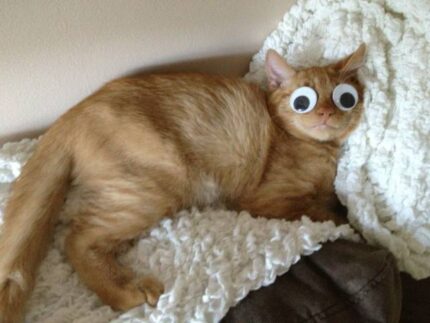 When calculating the levels of impact days the task of the trader is to determine the average daily volatility for major currency pairs. It is calculated in a variety of ways: on our website and other sites have calculators ready and tabular data of current average and maximum range of changes in the exchange rate for different Forex tools.

The majority of currency trading participants, particularly market makers, account for the volatility through hedging transactions for vanilla options. In more detail the mechanism strategies are described in a separate article on our site, so we will let it to focus on.

More than a simple calculation of impact levels is possible with the help of the service “Indicator Forex” which is in “Tools” at the top of our website. Access to the page tables of volatile currencies can be accessed through the section “Indicators”.

The service contains a brief statement, describing a fairly simple functional table of the volatility for the various Forex tools.

Exhibited in the first column the value of “52 weeks”, in the second column specify the Ticker of the pair and click on the last cell of the row labeled “day 1” (it should be shaded). 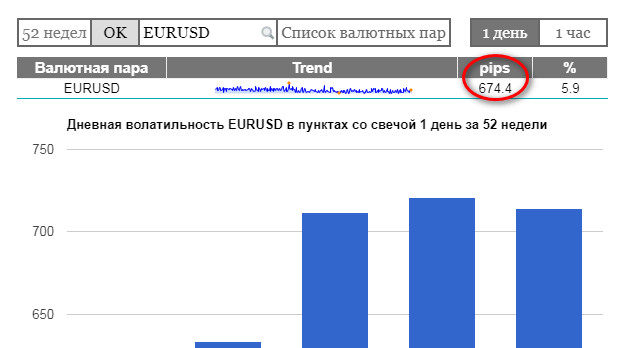 After the operations in the string will appear below the volatility value in the cell “pips”. In the example it is equal to 674,4 pips, or about 67 old points.

To obtain the levels for other currency pairs, we perform the same actions consistently replacing Ticker EURUSD for the needed tools and click “OK”.

For example, for GBPUSD, the annual volatility will be 1028,4 PP. 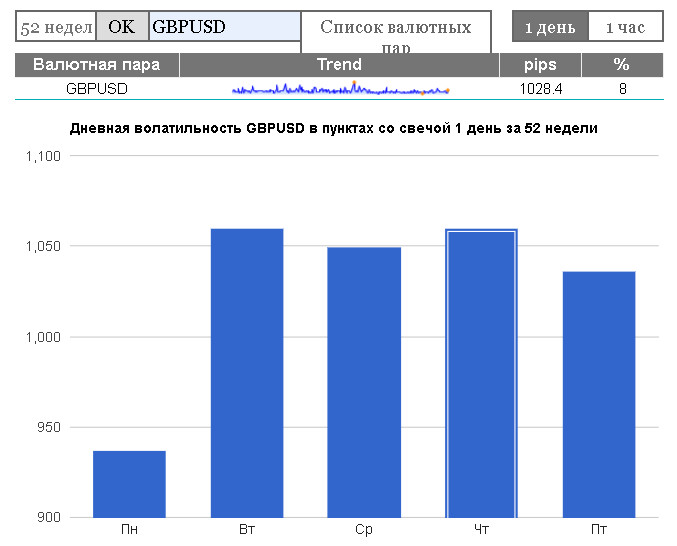 This means that the size of the shock levels of the day for countertrend trades in GBPUSD is equal to 102,8 old item. Rounded to an integer value receiving the same 100 points — this figure can be taken for calculations and transactions.

To summarize, emphasizing the main points: 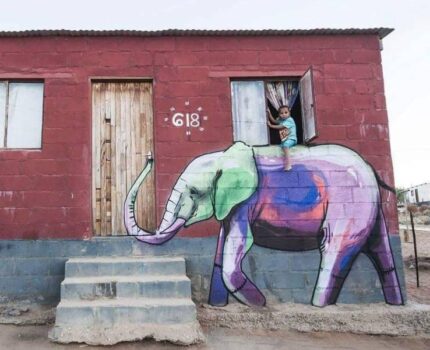 For ease of calculation in the rules below, the average daily volatility is 100 pips.

The starting point is 100 points for placing pending orders are defined as the opening price of a candle in 00-00. In advance of measurement of +/- 100 PP:

Opening one of the trades does not cancel the second pending order because of a condition of closing all positions at the end of the session. Quotes, passing 100 points in one direction, very rarely can return to the opening price of the day and walk exactly the same distance in the opposite direction. However, it happens. For example, the day of the release of Non Farm PayRolls. 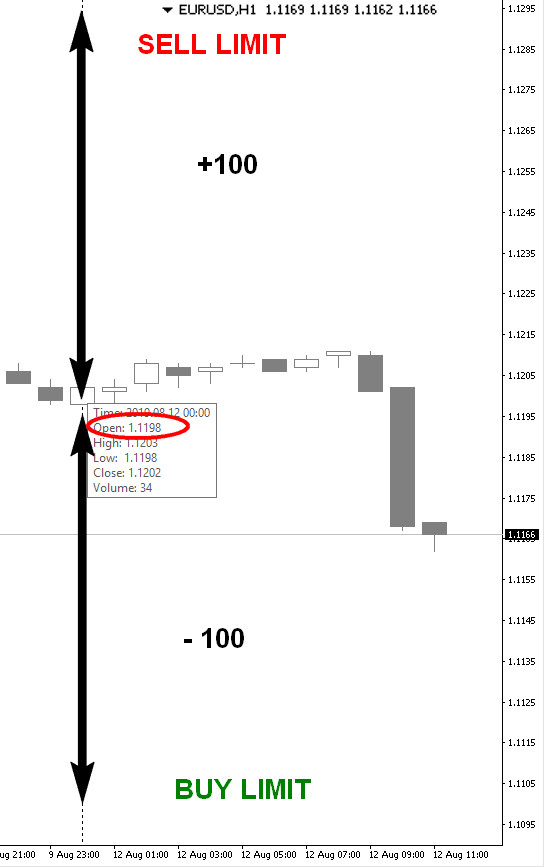 The open position is held until the end of the day (close of the candle D1). After this time, if not triggered stop loss or take profit, the transaction and the second non-activated pending order is closed manually. 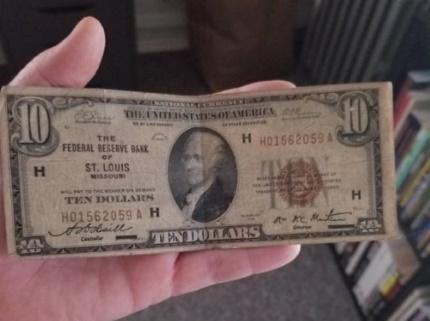 MM strategy standard — try not to risk more than 1-2% of the Deposit transaction. In the calculations, as always, will help our Calculator lot. 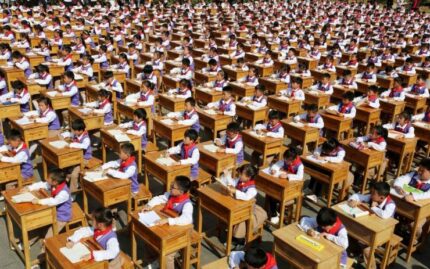 Because of the unpredictability of the shock of the day in the Forex market trader need to expose and cancel the orders. During the summer months, such volatility may not happen for weeks, while in the second half of the autumn and winter the number of transactions will increase to 2-3 per week.

The trader can forget to move or cancel pending orders that will lead to unexpected losses and as a result, will contribute to “forget” about this vehicle. In this case, enable the setting to automatically cancel pending orders at the end of the session, and on the impact of the strategy say about 75% winning trades.

To configure the expiration time can when setting transaction terms in the “Expiration”: 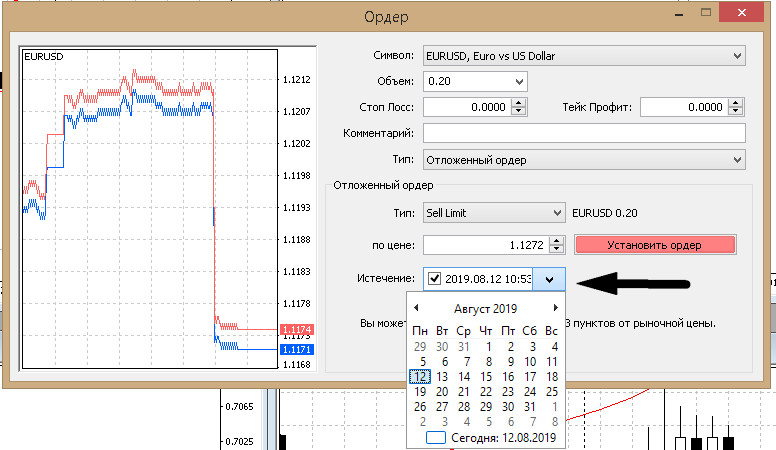 If this step is inadvertently omitted, after sending a request to the broker server, it will appear in the terminal window. Right-click on the line with “limatika” and select the menu item “Modify order”.

Put in the window of the expiration time and expiration date of the application, and the robot will automatically remove it from the terminal.

When not to trade the counter-strategy is shock days 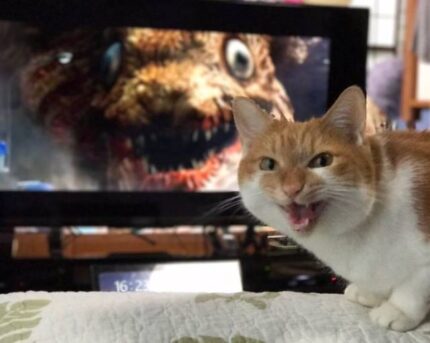 The dollar is the main global reserve currency, which makes it extremely popular in the period of global crises. When they arise, EURUSD volatility doubles, the quotes could be 200 pips for several days, leading to losses for contrarreloj strategy.

In times of crisis should be to avoid any option intraday trading, abnormally high volatility “knocks feet”, increases the number of false signals of the indicators, leads to slippage of prices, etc. This also applies to contrarreloj strategy strike days: economic crises occur every 5-10 years, so it’s best to take a break for a month or two until the crisis.

To understand where the beginning and the end of the crisis, will help the GDP of the US or the EU in case of negative dynamics, and the collateral currency futures Chicago stock exchange CME. While it will be significantly above $2000, — in the market it is better not to trade.

Also should as far as possible to avoid the single anomalies, which include: the referendum Brakcet, the scandalous election of Donald trump, and similar events; they can advance to recognize the strength and duration of the debate in the business press, news and media. 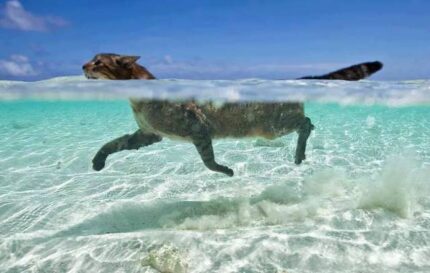 Consider a few examples. At the time of writing the average daily volatility of GBPUSD equals 100 points. (Don’t forget to carry out weekly allocations!) 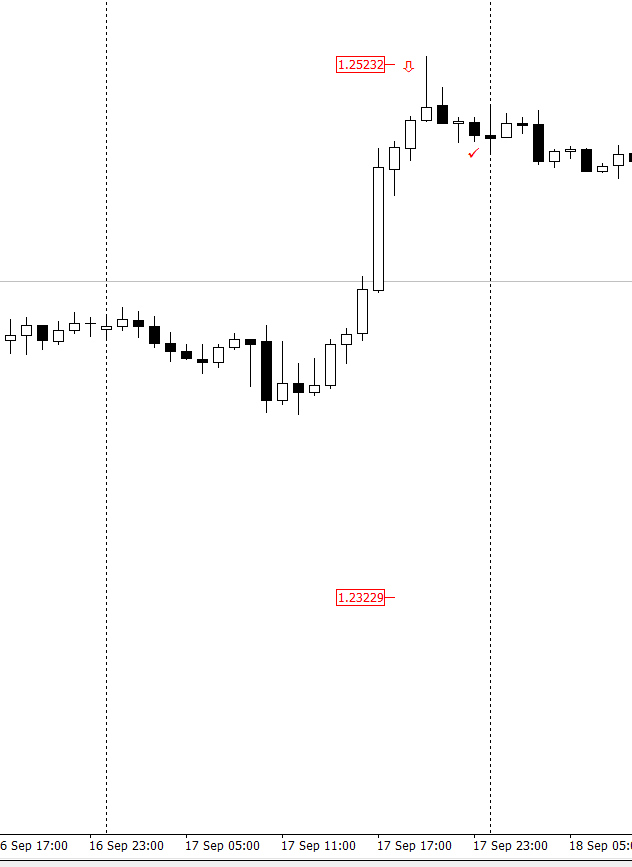 17 Sep GBPUSD was 100 pips from open price of the day the top, activating a pending order SELL LIMIT, and almost immediately turned around, activating the take profit equal to a 30% volatility, in this case 30 points. 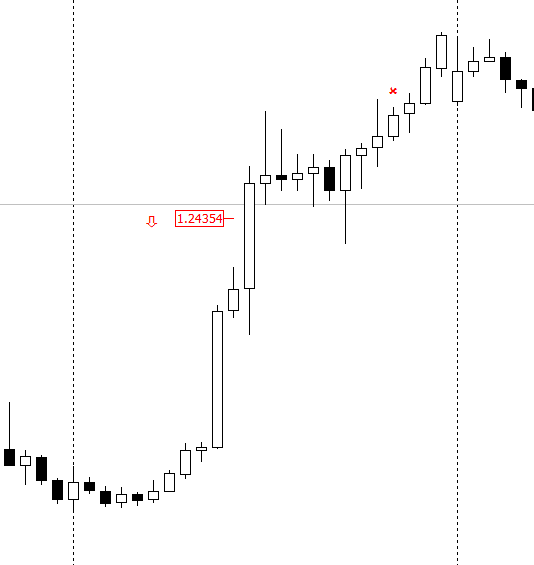 September 13, the pair went 100 pips up, activated our sell order and ran the above, worked a stop-loss equal to 50% of volatility. Foot sometimes will also not forget to put them. 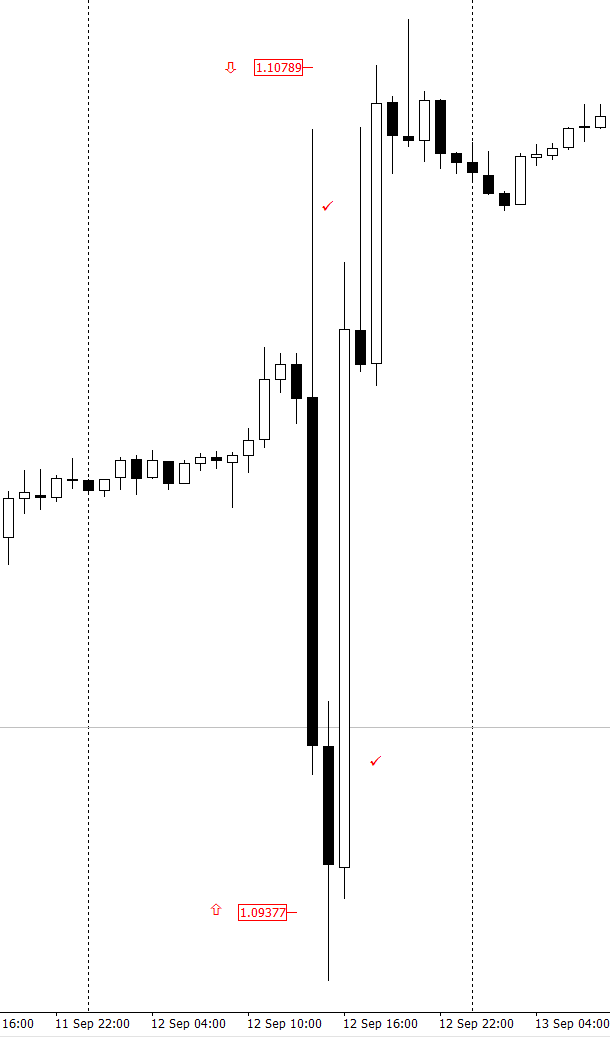 Throughout the day activated both orders, and both closed with take profit. This also happens. 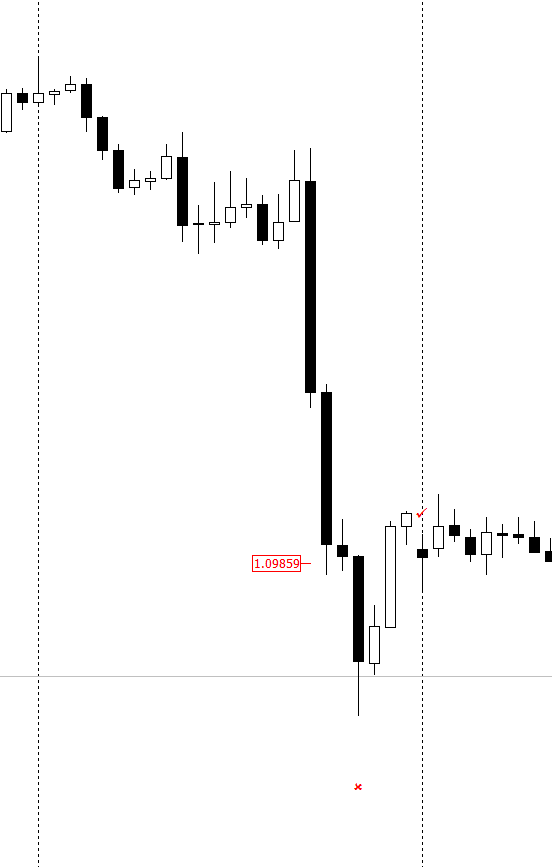 Again EURUSD. Will often these are the “boring” days. The buy order was activated, but before the end of the day did not work nor take, nor stop, and we closed the deal with a profit of 7 points. 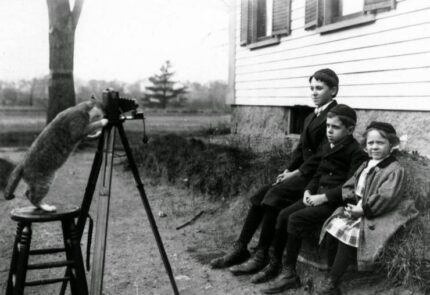 The countertrend strategy impact days, “the Equalizer” is a kind way of emotional revenge. When a trader, for whatever reason, misses the big move, the opportunity to make it even a fraction of the profits reduces the likelihood of developing a phobia FOMO – fear of missed opportunities. It was she who led currency speculators to erroneous and hasty inputs after the shock of the day.

The described strategy is simple and easy to use: does not require any indicators and deep technical or fundamental analysis, consuming daily about 10 minutes of time. Tactics entry allows setting alerts or the use of auxiliary advisors to support and close a position.