Hello. Below you will see what an interesting to trade in the Forex market on Monday 7.08.2017

On USDJPY pair has not gone below of 110.00 and lower boundaries of the triangle and formed a pattern of Rails. Likely will resume growth continuing this sideways movement. Then consider buying with the objectives of 114.00.

On the pair EURAUD bounced off a trend line and formed a pattern of Absorption. Probably will resume falling towards level of 1,4447 or lower, continuing the downtrend. Consider there sales.

On pair EURGBP formed a inside bar continuing to move in the area to 0.9000. I think that is a small correction , after which continue growth to resistance level 0,91000. Buy here do not consider, as the course of prices is not great. 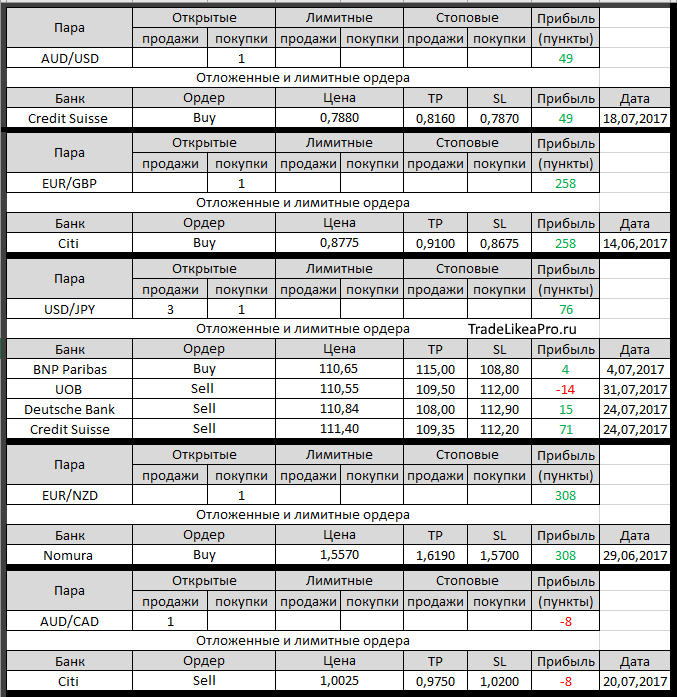 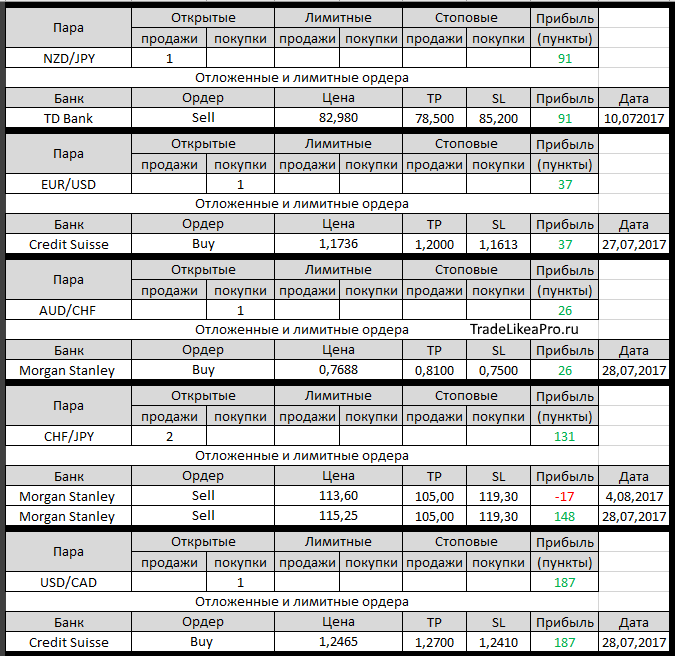 Asian shares rise following a rise on wall street yesterday, while the USD weakened slightly at first, but ultimately managed to keep most of the profits on the background of stronger than expected data from the labor market.

The widest index of MSCI of Asia Pacific index rose 0.6%, which contributed to the growth of MSCI World 0.2%, thus reached a record high. Chinese blue chips have achieved only minor success, as investors were hesitant to open new positions ahead of a series of new reports. The Dow on wall street rose 0.3%.

USD fell by 0.2% against EUR to 1.1796 after rose 0.8% on Friday. Against a basket of major currencies the U.S. dollar index added 0.2 percent and reached 93.361. On Friday, the index rose by 0.76%. And while positional players celebrate a good profit, it is worth noting that for a noticeable rally in the USD these days, the market needs to change not less than the rate of the Central Bank, and similar movements, which are observed in recent days can be very short.

European stock indexes rose as the U.S. currency made up a close competition for the EUR, releasing the potential for growth as the financial shares and the basic industries of the Eurozone.

The markets are rushing to expand the global rally, CMC Markets expects the FTSE will open with an increase of 0.3% and the French CAC 40 and the German DAX will start the day by 0.2%. Gold stabilized as the USD, though increased, but remained under pressure from weak economic reports lately. The metal traded at 1257.27 per ounce, slightly adding to early losses to 0.8%, received on Friday.

EUR showed a reversal, weakened at 0.98% to 1.1753 against the us dollar. However, on the economic front, Eurozone Affairs are in order, and his temporary weakness, in fact, due to the unexpected growth of the American currency. It is worth mentioning at least that the rise in industrial orders in Germany accelerated to 1.0% in June compared with a month earlier, according to the Federal statistical office, exceeding economists ‘ expectations for 0.4% growth.