Our explanation for the negative behavior on the stock exchanges during the end of the previous week was strained values and good profits to be realized in both Europe and the united states, combined with significant currency and interest-rate fluctuations in a psychologically sensitive mode.

We further noted that our positive assessment of a sommaruppgång in the offing been going wrong, but did not consider that we had seen the end of the current stock market upturn when economic fundamentals the de facto point in the right direction.

When the economy finally seriously begin to take off in Europe fell thus the exchanges in a couple of days during the somewhat panicky forms. Statements, which indicated that the ultra-light monetary policy from central banks slowly began to walk towards its end and that the Euro strongly moved up in combination with rising bond yields shook the investor community significantly.

We had a hard time to see the logic in the downturn, but while a market need power to rise, it may fall of its own weight no matter what it is that triggers the case. When the decline took place during the high volume crime of the important psychological levels we did not dare to dismiss the decline as yet another skrämskott and a false sell signal.

We chose to let the picture get clearer, and await with concrete forecasts for the current week and we have our most likely scenario now is that the positive börstrenderna is intact and that the (ex post) is more to find on the upside.

The broad u.s. market, the S&P 500 is less than 1 % from an all-time high, and although we are reluctant to accept the potential on the upside so have the market conditions to be stable. We do the same assessment for the Nasdaq, which hardly is any market where we are offensive on the purchase page, but where överköptheten very well can be corrected by going sideways. 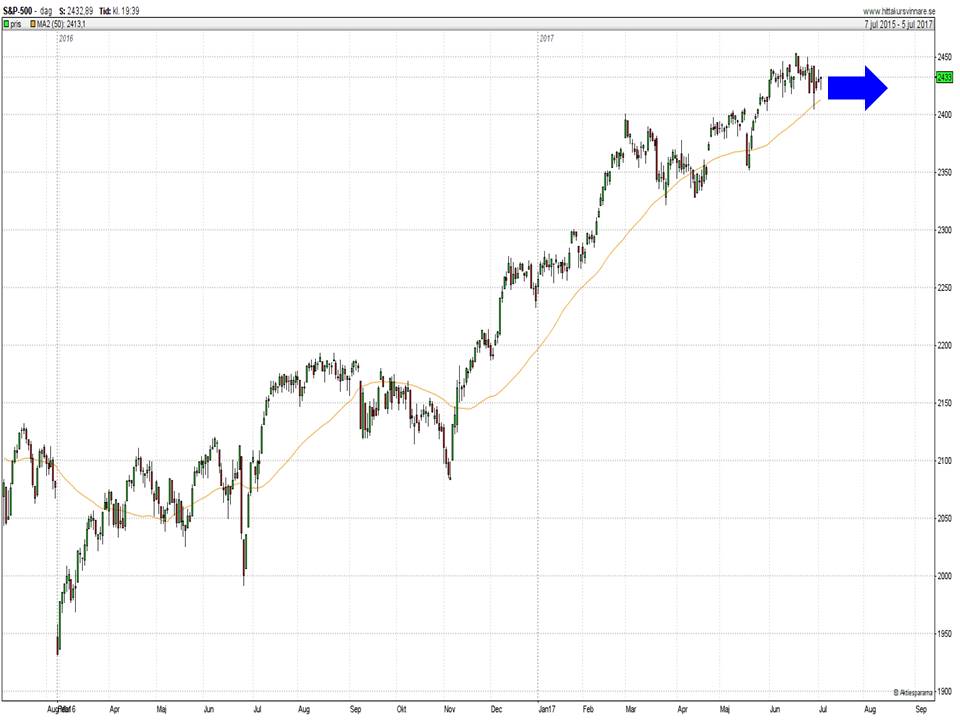 If we have a cool approach to the u.s. stock markets is the opposite of what comes to Asia. China shows clearly that the stock market is finally, after almost two years of wandering in the wilderness, trendar stable upward with a significant potential on the upside. South east asia, primarily Hong Kong ruled negatively on north korea’s missile launches, but in Singapore, south Korea and Taiwan is noticeable very little of the recoil that hit Hong Kong.

The basic positive behaviour is, however, still intact even in this market. We saw the past, the weakness of India as a köpläge and this exchange is now in the process of to challenge its recent peak.

On råvarusidan continues the oil to be extremely volatile, where two weeks of sustained increase of around 13 % during yesterday turned to a decline of over 3 %. However, it appears oil prices have established some form of tradingintervall between 44 to 54 dollars (48 u.s. dollars) and from a börsmässigt perspective, we are satisfied that the oil is moving this way.

Far more interesting is the fact that the gold, despite the weakening of the dollar dropped from almost 1300 dollars to 1220 dollars, then the price of gold has a tendency to attract buyers in times of financial distress. Almost all base metals except nickel shows, however, positive trends and, not least, the zinc exhibits a clear recovery.

The copper price has not risen as sharply, but copper, having trodden water ever since Trump became president now again started trenda up in what is likely to be a uppgångsfas of more long-term character. 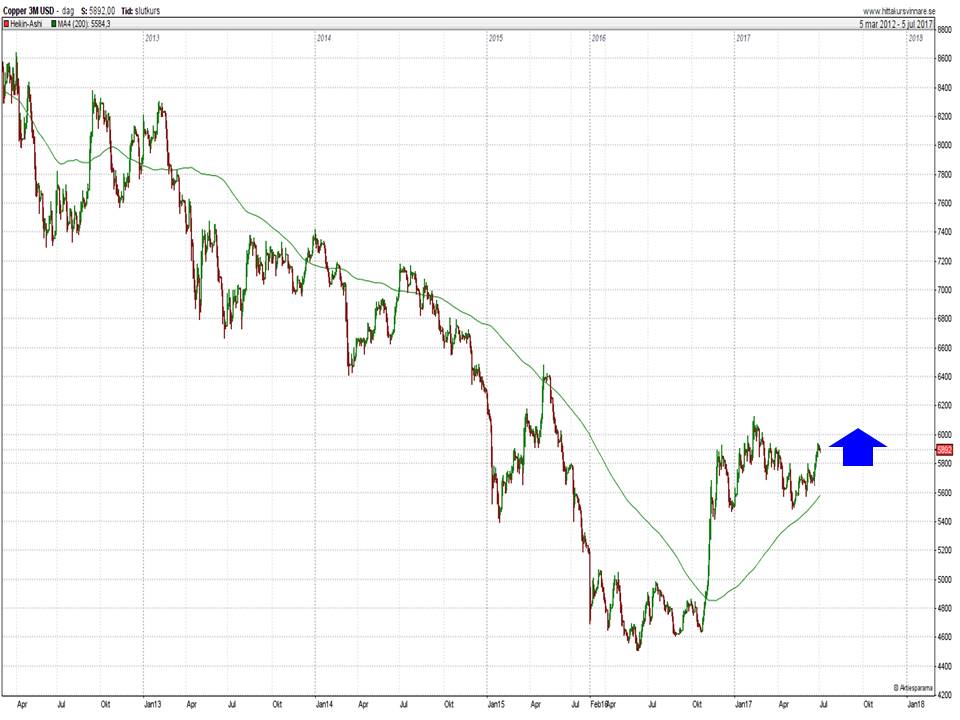 All of the major exchanges in Europe is palpable boring with a slight negative slope. Our previous assessment was that the behavior was of the short-term character, which has been proven wrong. We believe, however, that the long-term trend remains positive and that Europe is in a rekylfas of something more protracted character than what we expected. In order to be really comfortable, we want to soon see some strength on the German stock exchange and if the fall event would continue at increased pace, are we prepared to take a more negative stance.

In Sweden recaptured the stock market a large part of the previous week’s spigot already on Monday when storbolagsindex (OMXS30 index) rose by 1.6 %. For the Swedish stock market should show strength, we would like to see the workshop (36 % of the index) and the bank (27 % of the index) moves upward in the symbiosis is supported by heavyweights such as Ericsson, H&M and Investor (16 % of the index). This scenario looks to become a reality, but there is a huge range just above today’s indexnivåer must first be assimilated.

Our best assessment is that the previous week’s decline was a skrämskott and a false sell signal, but before pointing with the whole hand and to return to our earlier forecast of a rise to 1700 points for the OMXS30 (now 1627), we would like to see a clearer buying interest both in Europe and in Sweden.

Rapportsäsongen for the second quarter, which begins in earnest about 10 days becomes of course crucial for the continuation of the stock market, but we like it when the market goes in the this period, with a dull period in the back and believe that the results can give renewed energy to the on the rise. 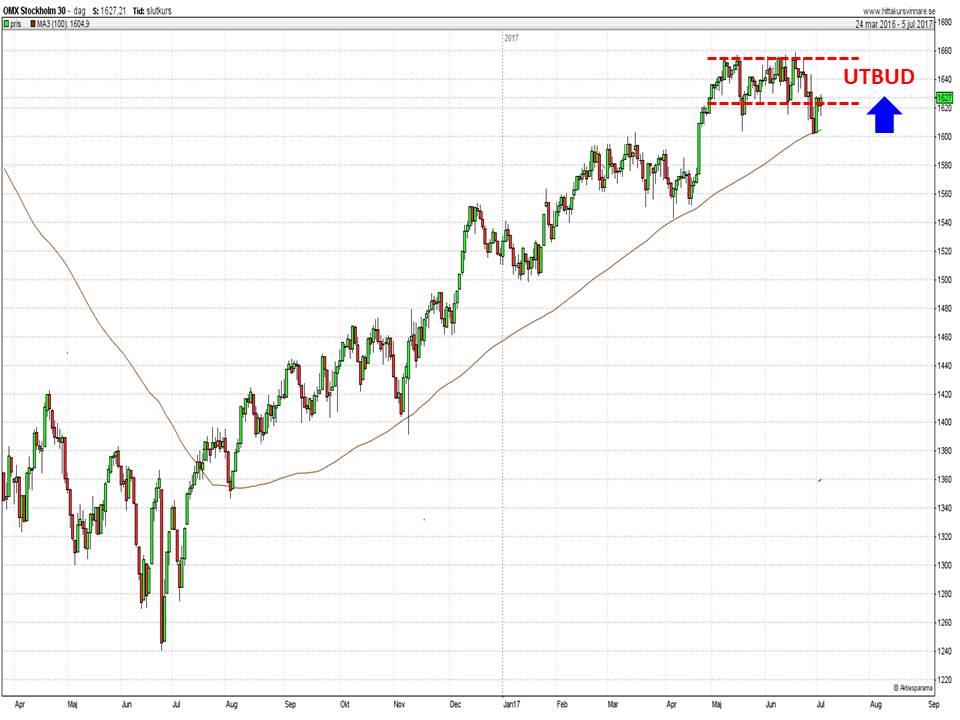