Our conclusion last week was that the u.s. dollar and långräntan showed weakness, the oil price was likely to fall further, gold met continued interest and that most of the base metals except copper showed weakness at the same time as a certain degree of concern over the strength in the economic cycle made itself felt.

We persisted, however, with the adage that ”the trend is your friend” and our assessment was that the international börstrenderna showed a healthy pattern, why we remained comfortable with our målkurs about 1700 points for the Swedish stock exchange (OMXS30).

The titles of the last four veckobreven has been the ”Continued consolidation of the stock exchange”, ”Sommaruppgång in the making”, ”The trend is your friend” and today’s ”stock Exchange knocking at the door”. The nuances are perhaps not entirely distinct, but there is a positive and moderately rising undertone which will hopefully have correlated well with the actual content of the analysis.

Today’s headline to clearly communicate that we believe that it is around six weeks long konsolideringsfasen/trendanpassningen is about to end and that the probability is good that we already next week could witness a new high for the year on the Swedish stock exchange (OMXS30).

When we study the american dollar and the långräntan, we believe that mattheten now start moving to bottenkänningstendenser. We do not claim this conclusion with emphasis, but not the less are we comfortable with expressing this view, and we believe that the renewed strength – in the proper magnitude for these two variables would be appreciated by the market. 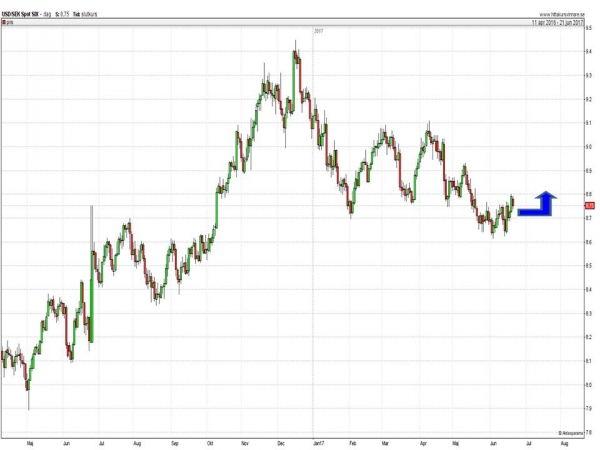 The price of gold has dropped significantly in recent times and we believe that the level around 1300 dollars (now 1251) will be difficult to break until we get a more noticeable nedgångsfas on the stock exchanges. Base metals do not have rosat market for several months, but here we see the now for all the base metals the same tendencies as for the dollar and the interest rate, i.e. the possible bottoming.

The business cycle is always difficult to project, but do not want to agree that this is starting to show avmattningstendenser without seeing the snare a certain possibility that the development could surprise positively.

Excessive optimism can of course be costly, but we are stubborn when it comes to following trends as long as these exhibit a consistent and healthy pattern of behavior. We like to the stock market upturn in most markets is lågvolatil to his character, then just lågvolatila trends – both up and down – has a tendency to be unusually stubborn and persistent in nature. If this trend would clearly change, t.ex. in the form of the unexpectedly strong and fast uppgångsfas, however, there is reason to be concerned when the euphoric tendencies usually occur just before the peak is reached.

The decline on the u.s. Nasdaq stock exchange two weeks ago with several teknikjättar in the lead created the creeps of the investor community. It looks, however, that the rapid nedstället was a skrämskott and the positive trend remains intact. 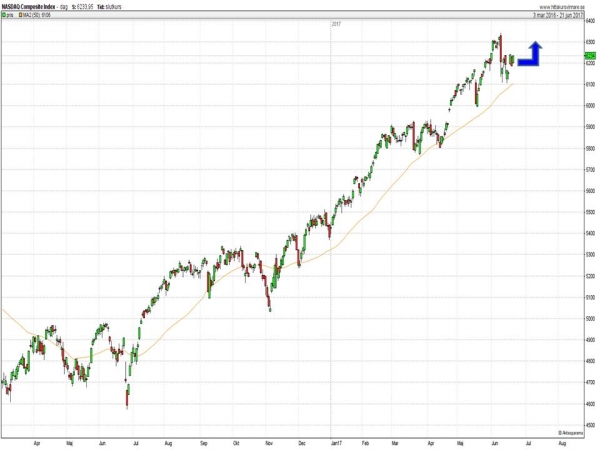 The broad US market (S&P 500) changed its direction from lateral to trendande direction already at the end of may. The upturn has, however, been modest, with the slight recoils along the way. We see no excessive potential on the upside, however, is comfortable with the situation, as long as it is stable in nature.

Behaviour is different in Europe than in the united states, and here we like really what we see. Most of the major markets at the end of what we refer to as a slow enfasrekyl in a positive trend. This behavior is preceded by a rapid increase in a basic positive trend, which we saw in the broad Europaindexen after the French elections. Then, stock markets have slowly, but purposefully vädrat out överköptheten, moved gently downward and adapted to the slope of their trends to a more realistic direction. 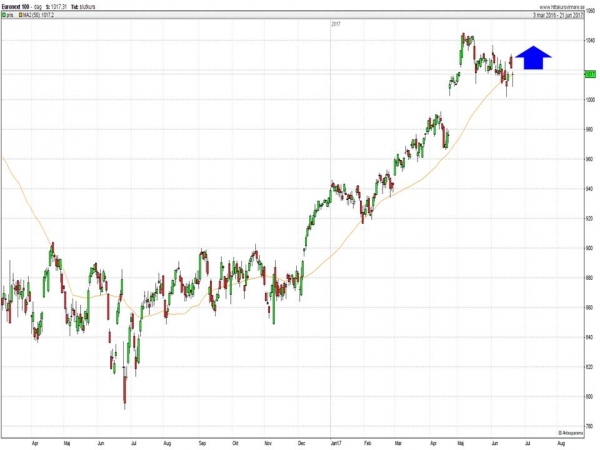 This behavior usually make many investors impatient and restless, i.e. the stock exchange is perceived as dull and lifeless, which is why the final phase in this movement are often characterized by a so-called false sell signal when the impatience and säljtrycket temporarily take the upper hand before the buyers regain command.

We believe that false sell signals is the best buy signals are generated then they have the ability to ”shake out the weak hands” and let the remaining säljtrycket and tension finds an outlet before buyers seriously take the command.

Last week, we noted that we were not overly focused on a specific date when this enfasrekyl would be to the right and pointed out that it was the underlying patterns of behavior that were important and especially the development on the German stock exchange.

The financial markets are moving – even in a positive trend – sideways most of the time the actual uppgångsfaserna usually occurs during relatively short periods of time. We now see a clear good probability that Europe and Sweden is ripe for a sommaruppgång and think that the Swedish stock market (OMXS30) in the month of July can reach up to our målkurs about 1700 points (now 1641). 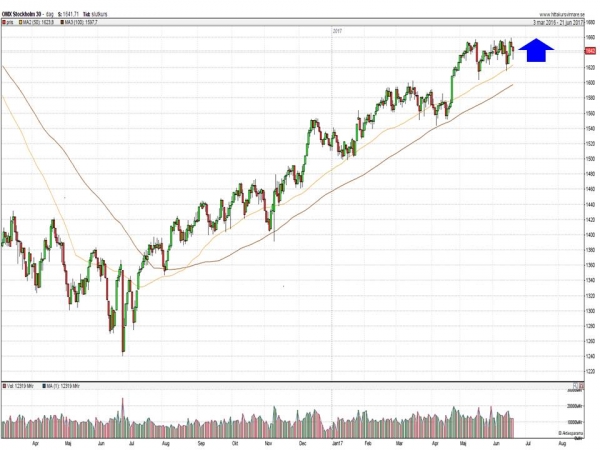 Wish You a really lovely and happy Midsummer’s eve