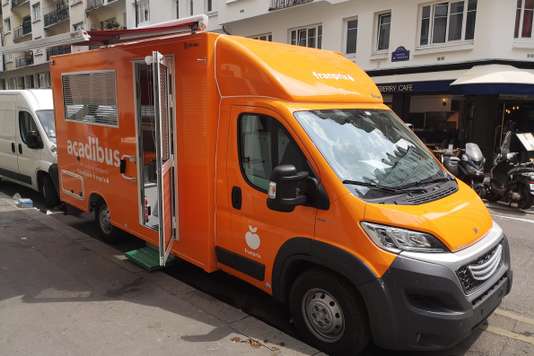 A funny bus tangerine impedes the passage of a truck, rue Jean-Bart in Paris in the sixth arrondissement, Thursday, June 28. A young woman comes out, all smiles : “I’ll manage “, she says to five people in an apron Franprix, it is wise to talk tables in what looks more like a conference room with its table Veleda, flat-screen tv and a coffee corner, to a minibus. Ann Geudens, director of the Academy of business and HR development Franprix, has just released the transition, to proceed quietly to the operation Acadibus.

Started may 22, and with a budget of 476 000 for a year – to buy an electric bus, set up, hire a team of six substitutes versatile and their chief of brigade, and pay for the training as such, Acadibus inaugurates a new mode of training of the whole staff of the retail chain, which moves the center of formation from store to store. In one month, 230 people of ten-eight stores in the Ile-de-France have already taken the bus. The goal is to train a thousand employees by the end of the year.

Franprix has committed in recent years a turning point to offer more services, and this has generated a need for skills. Employees must now be able to “make chicken, bread, beef, merchandising, implementation, etc, All the world is brought to be versatile,” says Ms. Geudens. But, ” with 900 stores in 10 employees in average, it was difficult to train all the employees of the same store. It was therefore necessary to take the training in the store, ” explains Sandra Hazelart, the HR department of Franprix.

The brigade of six substitutes, specially recruited, came in the early morning of June 28 to Franprix rue Jean-Bart to work instead of employees, so that they can, free your mind, sit in the bus to be trained. And…