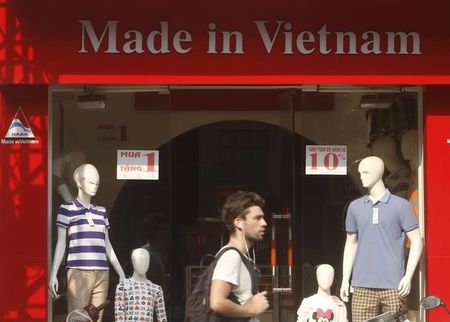 according To an analysis of the bank Nomura, Vietnam would be the biggest winner of the trade war which is raging between China and the United States.

The bank underlines that the dorits of customs applied to the chinese products exported to the United States has led to changes in the supply chains of importers of the two largest economies in the world that have sought to avoid paying tariffs that are higher.

The bank Nomura, therefore, believes that the Vietnam economy has been boosted by nearly 8 % thanks to changes in the production.

The bank has studied the trade data of the 50 largest economies in the world, from the first quarter of 2018, shortly before the United States does not publish their first list of chinese imports on which they intend to impose customs duties in punitive damages, to measure the magnitude of the shifts in trade flows.

The majority of the gains of Vietnam comes from the additional imports of goods covered by the u.s. tariff on China, mainly electronic devices, furniture and machinery automatic data processing, probably because the multinationals have the ability to quickly relocate to other plants outside of China, according to the analysis.

A small portion of the increase came from the added import by China of boards, panels, threads of cotton, not combed, of cotton and other electrical appliances in Vietnam, instead of the United States.

The changes in the sources of u.s. imports of goods, such as electronic products, also helped Taiwan and South Korea, traditionally the major manufacturers of these products.

“It is important to note that these results suggest that if the United States follow through on their threat to impose tariffs of 25 % on a new tranche of $300 billion of imports from China, this could lead to a substitution of much greater import, given that a much larger proportion of this group of imports includes electronic products “, wrote the analysts of Nomura.

In regards to the economic impact of the trade war, Nomura notes that the changes in supply chains have reduced China’s GDP by 0.5% this year, compared to 0.3 % in the United States, as exports to the United States accounted for a larger share of the chinese economy, according to the study.

Finally, the study notes that the United States has been able to find more alternative sources for their imports than China. Approximately 65% of the chinese products affected by the u.s. tariff by volume, 86 % by value, have been replaced by products from other countries.