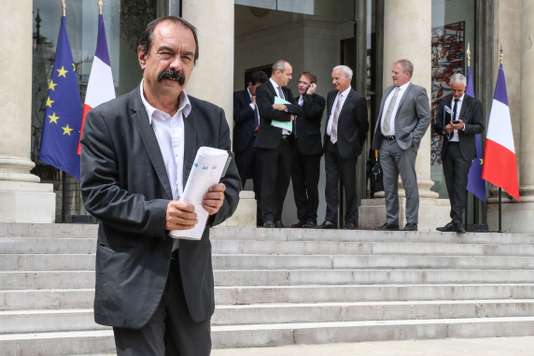 In a suit and tie, they marched one after the other behind the microphone installed in the courtyard of the Elysée palace, after their meeting, on 17 July, with Emmanuel Macron. Eight men, all number a of a trade union organization or employer. And the “zero women,” as was soberly noted Laurence Parisot, the former president of Medef, on Twitter, in the aftermath of the meeting.

The year 2018 would have been the opportunity to see leaders arrive at the helm of these structures since three of them have enjoyed electoral process : FO, CFDT and Medef. Las. Again, three men have been elected. Very rare are those who drive, today, a trade union organization. There’s Bernadette Groison (FSU) or Cécile Gondard-Lalanne, co-spokesperson of Solidarity, but they remain exceptions.

In the past, Annick Coupe has long been in Solidarity (2001-2014). Nicole Notat was the secretary general of the CFDT for ten years (1992-2002), and Carol Covered president of the CFE-CGC the time of a mandate (2013-2016). In the whole history of trade unionism, these leaders can be counted on the fingers of one hand. “The fact that there is a secretary general is not a good indicator, analysis, however, Rachel Silvera, master of conferences at the university of Paris-Nanterre. It may even be the tree that hides the forest. Even when we can view women in certain directions, this is not sufficient : it is necessary to look at all directions, everywhere. “

Need to move the situation

A study of the economic, social and environmental, published in 2015, entitled ” The driving forces in the feminine “, recalled that in France, the unionization rate of employed persons was estimated at approximately 8 % : 7.5% for women, 9% for men. Although representing nearly half of the active population employed, the unionized were 37 % in the CGT, 47 % to CFDT, 45 % at FO, 42 % to the CFTC,…