A few days after the call of Bruno Le Maire, the minister of the Economy, to The Post of “to become the leading lender of SMALL business”, a study* shows that access to credit has indeed always an air of obstacle course for smaller businesses. These very small companies, with fewer than 10 employees and a turnover of less than two million euros, are nearly 3.6 million in France, 1.2 million auto-entrepreneurs.

If they suffer from a certain image of fragility, these companies offer significant potential for banks : this market is estimated at 7 billion euros of net banking income (NBI) and the outstanding credit to SMALL and grew 4.7% per year.

According to the study, published Wednesday, a result of the joint work of the credit Mediator, Deloitte and In Extenso, an officer of TPE on both has made an application for credit from its bank in the last three years. However, they are 56% to “have encountered at least one difficulty.” Thus, they are 18.5% to a denial of total and 11.7% to a refusal “partial” (a credit in the amount less than the amount requested). Most importantly, they are 33.8 per cent have faced “a significant demand for guarantees, sureties personal”.

The “administrative burden” but also “response time too long” are, respectively, cited by 29.1 per cent and 28.8 per cent of managers interviewed. These obstacles encountered by OFWS are strongly influenced by their relationship with their bank. While the business leaders who met with no difficulty in the application of credit respond to 96.6% that they have confidence in their bank, they are more than 67.6% at the express if they have encountered at least one difficulty.

This figure even drops to 44.2% for the TPE that have been denied credit. An index that, according to the study, could be improved if the argumentation regarding the refusal was better developed.

8 managers in 10 trust their bank

This confidence level is strongly dependent on the relationship with the advisors. In fact, 39.7% of the leaders surveyed did not known that a single advisor for the past three years and say that they trust the latter more than 86%. Conversely, increasing the number of advisors met increases, the rate of trust decreases : only 58.8 per cent of TPE having experienced four advisers or more believe they have confidence in their bank. Overall, the results of the study show that 80.6% of the leaders of TPE trust their bank professional. 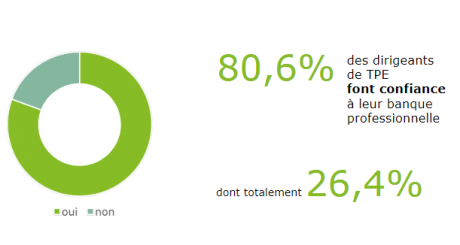 (The confidence of the leaders of TPE in their bank. Source: Deloitte In Extenso)

The image of the bank, and above all, guidance and support in case of problems are also important factors in this relationship of trust. Calls of courtesy are put forward, even if about half of the leaders (49.2 per cent) only declares to have received a call from their consultant to find out if all was well. The officers received a call of courtesy, and are more likely to provide early warning of and themselves their advisor in the event of financial difficulties (81.1 per cent), as well as to communicate to the balance sheet (53.8 percent). Conversely, if the TPE have not received the courtesy call, they are 47,1% to send their balance sheet when their advisor request. They have 15.9 per cent to wait too long before notifying them of any financial problems.

The lack of competence or follow-up on the part of their advisor is also the first reason for the TPE of change the bank (59,8% of respondents), followed by the refusal of funding (21.4 per cent) and rates (15.2 per cent). However, they are a 32.1% reported to have changed school at least once since the creation of their business.

* Study carried out by the Mediation of the credit, Deloitte and In Extenso, with Moai and TrustInside, querying 4.372 leaders of TPE of which 70.8 per cent do not have any employee in march 2017 and organizing 4 round tables with the responsible customer bank.