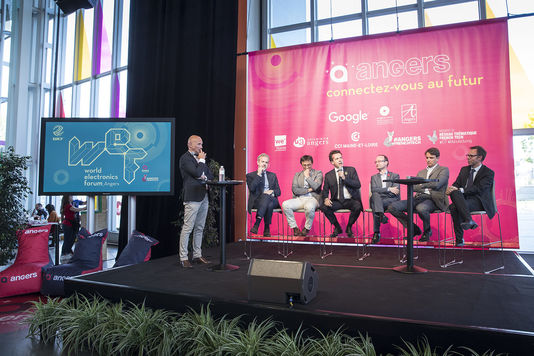 “France is back ! “The slogan pronounced at the last Consumer Electronics Show Asia was rich of promises and revealing of the expectations that surround the French Tech at the dawn of this stage of the european forum of the giants of the electronics, the second only on the Old Continent, after London in 2005.

“France is the world leader ”

“France is now the world leader in the field of start-up and innovation “, confirms professor N. K. Goyal, president, CMAI Association of India (cyber security, 48 500 members). “Everybody today is turning to France for new products. For it is here the largest meeting that the World Electronics Forum [WEF] has known. “A founding member and listened to the forum, he stated :” For us, the French start-ups can make 10 billion dollars worth of business in two years [8,45 billion euros]. “India has, it is true, a potential… exponential :” We have a population of 1.3 billion people, and it is in the process of building hundreds of smart cities, almost fifty of metro networks and we want to reach the 165 gigawatts in solar energy production. “

China does not want to be left out. It is she who has sent the largest delegation to the WEF, about thirty people. Wang Ning knew of France as ” Chanel, Vuitton, fashion week and the mineral waters “, but the president of the powerful China Electronics Chamber of Commerce has revised his judgment. “China is the biggest electronic market in the world in terms of production and consumption and would like to take a larger share in terms of innovation. We invite the French start-ups to come and invest here with great pleasure ! “The country, he says, has planned to wager $ 100 billion on foreign companies in the coming five years.