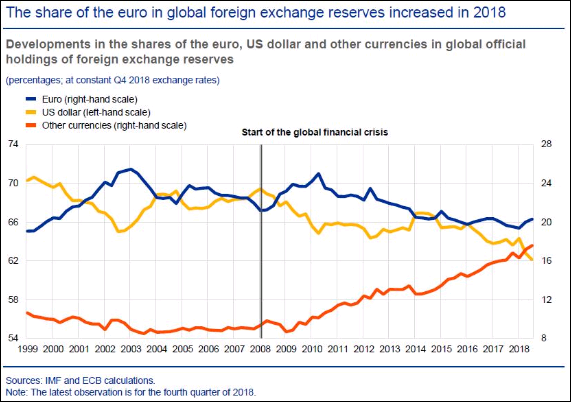 use of the Euro

The European Central Bank has today published a report highlighting the increase in the global use of the euro in the foreign exchange reserves, after a low point record last year :

The central bank noted that this increase was mainly due to the volatility of the us trade policy and concerns about rising u.s. interest rates, while attributing to the demand for the euro to a growing confidence in the future of the euro zone.

Without naming it, the ECB points finger like the trade war, which would seem to generally encourage a move away from the Dollar.

It should be noted, however, that if this “volatility” of the trade policy US seems lasting, the factor of fears about the rate increase, US is no longer really relevant, because the market expects now with a near-certainty that at least two rate cuts from the Fed.

In its report, the ECB has mostly highlighted a growing share of the use of the Euro in the worldwide reserves of foreign exchange, the issuance of debt, deposits and loans outstanding.

Its role as an invoicing currency in international trade remains generally stable, note the central bank.

To give a little perspective, it may be noted that the share of the euro in the global reserve currency remains significantly lower than that of the dollar, The Euro, representing 20.7% of reserves, while the ticket represents 61.7% of them.

That said, this figure is a historic low for the dollar, as countries continue to diversify into other major currencies, like the japanese yen and the chinese yuan.

Thus, the overall use of the Dollar follows a downward slope from 2014, as seen in the graph earlier in this article.