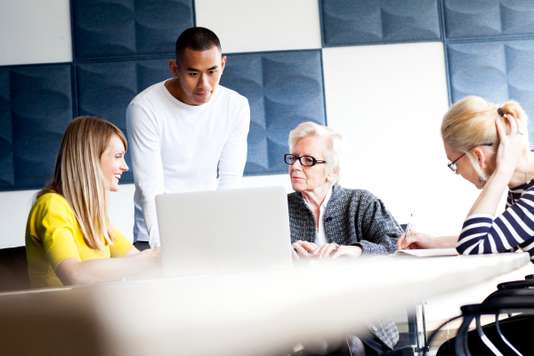 While a new pension reform is on the horizon, the department of statistics of the ministry of Labour (Dares) and Insee are appropriately focused on the employment situation among the seniors. These two organizations have delivered their analyses, published a few days apart in July. And make the same observation : the employment of older workers is exploding, while this age class is still as hard to find work – stable in addition. Paradoxical ? Only in appearance.

First finding : between 2007 and 2014, the employment rate of 55-64 year-olds has jumped by more than 10 percentage points, from 35.4 % to 47.4 %, the statistics service of the ministry of Labour in a document of study (link to PDF) published on the 24th of July last. Downside : this increase is not due to an increase in the recruitment of profiles of seniors, but to the ” relative decrease in the number of departures “, according to Dares ; in the clear, their retention in the company that employs them.

This is a consequence of multiple reforms undertaken by successive governments aimed at keeping older workers in activity. The head of the list, ” the gradual termination of early retirement and [the] hardening of the conditions of retirement “, says the statistics department of the ministry of Labour.

Having trouble finding a job remains the most significant in the 55-64 year-olds than among other age categories. For evidence, “the share of seniors in the movements of labour is substantially lower than their share in employment,” leading the study. While this age class occupies in it only 28% of jobs, over 50 years of age represent only 15% of movements of workforce in 2014 in the private sector (excluding agriculture and acting).

The purposes of CDD, first ground for departure