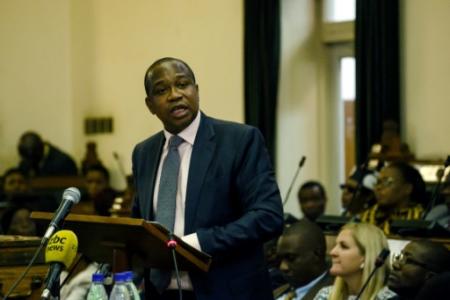 Zimbabwe announced on Monday, prohibits transactions in foreign currencies, the umpteenth attempt to dry up the black market in foreign currency and to avoid the return of the hyperinflation that has ravaged the country’s economy.

Since 2009, it was possible to adjust its spending (supermarket, petrol, bills at the hospital…) in a foreign currency, including us dollars very popular with traders in this southern African country.

The announcement Monday of the zimbabwean authorities to put an end to this provision – a decision that has already been controversial – one step closer to the country of the restoration of a true national currency, promised several times by the president, Emmerson Mnangagwa.

“As of 24 June, the british pound, the u.s. dollar, the south african rand (…) or any other currency cannot be used as a currency with the zimbabwean dollar for any transaction,” announced the central Bank.

“As a result, the zimbabwean dollar remains the only currency that is allowed for transactions in Zimbabwe”, she added.

In power since the end of 2017 and the resignation of Robert Mugabe, the absolute master for thirty-seven years, Mr. Mnangagwa is promising to revive the economy, so far without result.

Lack of liquidity, currency in free fall, high inflation, endemic unemployment, the country is stuck for two decades in an endless crisis.

In 2009, the country had been forced to abandon its currency completely devalued by hyperinflation dizzying heights of several hundred million percent, in favour of the us dollar and south african rand in particular.

Again, the operation failed. The value of the “hop notes” has collapsed, inflation has picked, dug the deficits and caused the return of the shortages of basic products such as oil, sugar or drugs and, for the past two months, power cuts widespread.

In January, the multiplication by two or more of the price of fuel has caused riots in the country, severely suppressed – at least 17 people dead and hundreds of arrests, according to civil society by the police and the army.

In February, Mr Mnangagwa has decided to float the value of its “bond notes”, renamed for the occasion dollars RTGS (real time gross settlement) or “zimbabwean dollars”, with the hope of drying up the black market. Again in vain.

The value of the “zimbabwean dollars”, which are not recognized on the foreign exchange market, is falling and, according to the statistics agency (ZimStats), the increase in price (97,85%) has even come close to the 100% annual rate in may.

On Monday, the minister of Finance, Mthuli Ncube, has justified its decision to ban foreign currency by the need to “bring the situation under control”.

Employees “are not paid in dollars (…), they do not have the funds to pay for drugs or services in hospitals and clinics that require us dollars”, took the example of Mr. Ncube in front of the press.

His decision has been freshly welcomed by the opposition.

“It is only going to exacerbate the chaos”, a late senator of the opposition David Coltard. “The market is redollarisé by a lack of confidence in the us dollar RTGS”, he pointed out on Twitter, “you can’t force anyone to like a currency”.

The reaction of the markets has not been more enthusiastic.

“The measure can be disastrous if the system of purchase of foreign currency through the interbank market doesn’t work”, warned with the AFP, the independent economist Gift Mugano, “the exchange rate (foreign currency) will rise and the inflation”.

According to his colleague Jee and van der Linde, the firm’s south african African Economics, the introduction of a new local currency will not change anything in a country whose economic fundamentals remain more than hesitant.

“It requires confidence,” he said to Bloomberg, “people will not believe in this new currency and this will increase further the black market”.