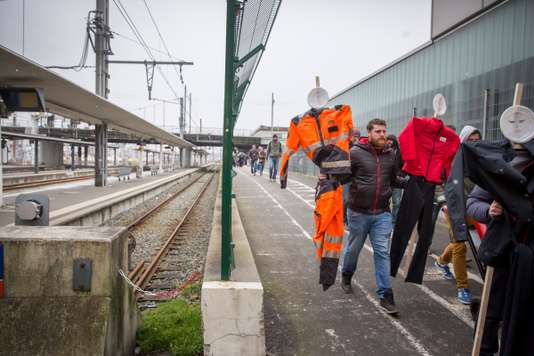 In Couturier, a railroader, this is a story of family. The father, Bernard, who arrived as an apprentice in 1963, ” with this pride to have a job for life “. One of his daughters, Elodie and Stephanie, who were recruited at the end of the 1990s, with “the same ideal and the same pride” offer to turn “job security” to their family.

But the successive measures taken by SNCF in recent years, tending towards a gradual liberalisation of its services, have tarnished the story of the family, leaving you with a feeling of abandonment, full of anger.

Thursday, march 1, it was “fifteen years of box” Elodie, 38 years old, saleswoman in the company rail Chatelaillon-Plage, a small station in the Charente-Maritime to the sounds of summer. The day before, she had participated in Bordeaux, near the Saint Jean train station, the gathering of the workers of the region Nova-Aquitaine, who came to protest during the committee against planned job cuts on different sites – as these 198 jobs threatened over 300 in a service center at Sacred – and against the establishment of a line Bordeaux-Arcachon without controller on board. She deplores “a case of the company” as a result of a ” degradation dismal performance of the public service “.

His sister, Stephanie, can testify to this : the SNCF office on rue Sainte-Catherine – artery the best shopping of Bordeaux, where she worked, was closed in December 2017. She’s sitting in in a “gray area” : as the employees can’t be fired, they are reclassified according to their needs. Those who do not have a mission need to every day to come to the service ” internal mobility “, see if a work can be proposed.

In this context, the announcement by the prime minister, Edouard Philippe, a reform that would, inter alia, the end of the status of a railroader…