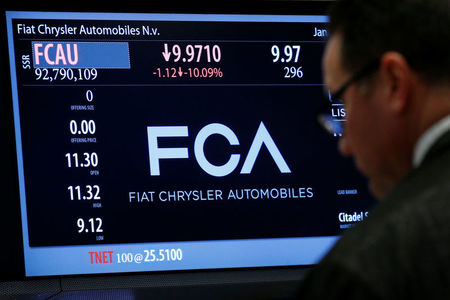 After first rumours about this Monday, the French car manufacturer Renault (PA:RENA) has stated he is “studying with interest” the proposal of his rival Italian-american Fiat-Chrysler who would like to proceed with a merger of the two companies in the framework of an agreement that could help reshape the global automotive industry.

Fiat-Chrysler has launched Monday, this idea, which would give birth to the third largest automaker in the world, a company that would have a significant presence in all major global markets and in all segments of the market, electric and hybrid vehicles to compact cars, passing trucks, or luxury cars.

This would also allow the two companies to achieve the economies of scale necessary to participate in the next revolution of the automotive industry : autonomous vehicles. Fiat has estimated that the merger would enable the new company to save more than 5 billion euros ($5.6 billion US) per year.

The merger would create a giant that would produce approximately 8.7 million vehicles per year. Only the Germans from Volkswagen (DE:VOWG_p) and Japanese Toyota (T:7203) would be greater.

The next step will be for Renault to decide whether or not to recommend the proposal to its shareholders. If they do, it will be up to the shareholders of both companies vote in favor of the transaction.

According to Marco Leonardi, chief economist at the State University of Milan, the deal could face some hurdles, including in relation to potential job cuts.

The question of who will direct this potential future group is also in limbo. Fiat says it will be a merger in equal shares and that the board of directors will include independent directors, but that does not mean that it will be necessary to appoint a pattern maker, and the discussions about whether to Fiat or Renault will choose it could be a source of deadlocks.

Roberto Alfonsi, analyst in the automotive sector in ABS Securities, said that there is also the issue of the role of the French State in Renault. The company was privatized from 1996, but the French State retains a 15 per cent stake. This means that the French government would hold 7.5% of the combined company, while the Italian government has never had interest in Fiat.

“The shareholders of Fiat might say that they will not approve the transaction unless the Italian government takes a similar participation in Fiat, or that the French government sells its shares,” said Alfonsi in an interview.

However, despite the obstacles, the project seems economically logical, particularly because the two companies is complete in relation to the geographical presence around the world.

Recall that Sergio Marchionne, the famous businessman italo-canadian who has driven the merger of Fiat with Chrysler in 2014 and has managed the new company until his death last year, has predicted that the global market will eventually support six major automobile manufacturers. As an independent company, Fiat is the eighth automaker in the world, one position ahead of Renault.

Starting from this point of view, a concentration in the sector, therefore, seems essential, and if the project Fiat-Renault is successful, this could give ideas to others. So we can potentially expect a profound transformation of the face of the global automotive industry over the next few years.