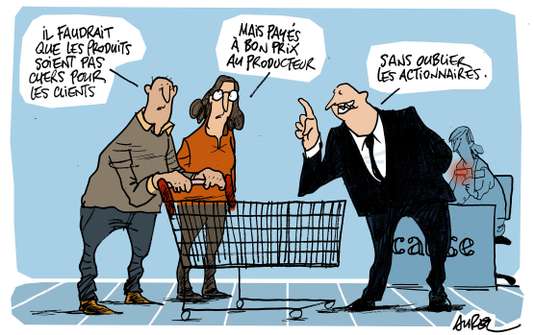 Nutella and diapers, same fight. Once again, Intermarché made headlines with its promotions of big brands sold short to 70 %. The shelf of packets of Pampers, Tuesday, January 30, resulted in the same scenario as the selling price broken jars of spreadable paste of 950 grams, a few days earlier. Shoving, or even battles broke out in several stores. Even if the directorate-general for competition, consumption and repression of fraud (DGCCRF) goes to investigate to see if the sign has not sold these products at a loss, Intermarché has succeeded in its “coup de com’. An operation whose timing is no accident.

The minister of agriculture, Stéphane Travert, must, indeed, present to the council of ministers, Wednesday, 31 January, his bill ” for the balance of trade relations in the agri-food sector “. However, one of the components related to the supervision of the promotions and on the threshold of resale at a loss. This legislative text, Emmanuel Macron promised during a speech in Rungis (Val-de-Marne), on the 11th of October, at mid-term of the general state of the power supply. The head of State was cited as a priority objective : to put an end to the price war between the major retail chains, destructive of value for all and a source of prices not remunerative to the farmers.