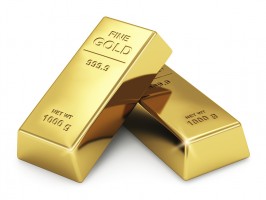 Gold is recovering from a series of five consecutive days of decline, and begins to increase after reaching its lowest level since 5 weeks, it has reached during the last session.

Is currently trading around 1245-46 dollars, the precious metal is enjoying a new wave of trading world marked by a certain risk aversion, which tends to stimulate the demand for traditional assets (values so-called ” shelter “).

In addition, a slight relaxation around the us dollar has also helped to improve the support for this “commodity” is denominated in dollars, and has participated in the recovery trend of the metal.

However, it remains to be seen if the yellow metal is able to maintain this movement of recovery, taking account of the expectations of the growing of a rate increase by the Fed by the end of 2017, boosted by the comments optimistic of the various members of the FOMC.

In spite of the figures which are a little moody in the United States, that have not shown economic growth that is consistent, the prospects of higher interest rates in the United States have been one of the key factors contributing to mitigate investors ‘ appetite for unprofitable products and could, therefore, hinder a quick recovery.