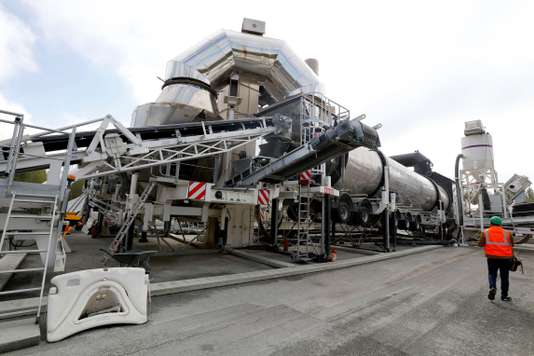 A large fireplace, of the drums which rotate, reservoirs, huge, bins and trucks parading to receive in their grab for the valuable bitumen… in Saint-Christoly-de-Blaye (Gironde), on the edge of the A10 motorway, a kind of spaceship landed on a no man’s land. It is here that Eurovia, a subsidiary of the Vinci group, has invited members of the press, Tuesday, October 9, to present its new plant mobile asphalt hot, capable of recycling 100% of a portion of the highway.

“This is a world first “, says Jean-Pierre Paseri, director general of Eurovia France. About ten kilometres away, the company has planed down the road and recovered all of the material, that it was sorted before processing it in his plant mobile codéveloppée with the Fayat group. And in order to ensure the durability of the new coating, Eurovia has added an additive to facilitate the binding of the aggregates and of the bitumen reused. Then, the workers have relocated the foundation, the base and the layer of the working capital of the highway on one kilometer.

“Thanks to this unique tool, we are able to produce a coated classic fully recycled,” says Mr. Paseri. While respecting the principle of the circular economy, a necessity, not only to reduce in the medium term, greenhouse gas emissions, but also to avoid exhausting the mineral resources.

“Lock technology ”
For forty years, BTP seeks to reuse a maximum of the materials from road pavement rehabilitation

Other manufacturers, such as Colas or Group this summer – also in italy –, have already renovated portions of the road by reusing 100 % of the existing material, but it was basically a renovation to cold, by replacing the bitumen, a by-product of the oil (which binds the aggregate), by a binder of natural origin. The cold recycling is only possible on roads less traveled as a highway, because it is a…