Thursday’s trading continued to be dominated by buyers for the 9th trading day in a row. Storbolagsindexet OMXS30 index managed to close just above the zero +0.07 proent to 1624.98, despite the fact that indextunga H&M fell -5.0%. The turnover amounted to 17 billion kronor on the stockholm stock exchange. The U.S. managed to also end the weak on the plus, and the S&P 500 is back above 2500. After overnight trading in Asia is mixed noises, and for the Swedish part, it means a cautious to slightly negative introduction…

OMXS30 index continued to trade to the plus of the 9th trading day in a row on Thursday.

Despite the fact that we got a finish on the plus side, it was still only +0.07 per cent rise. It is interesting, however, was that köpstyrkan had a considerably larger advantage than the previous trading days, in line with net sales clearly increased to sek 17 billion.

Thus, we continued to maintain the land over the technical support level 1616 points. 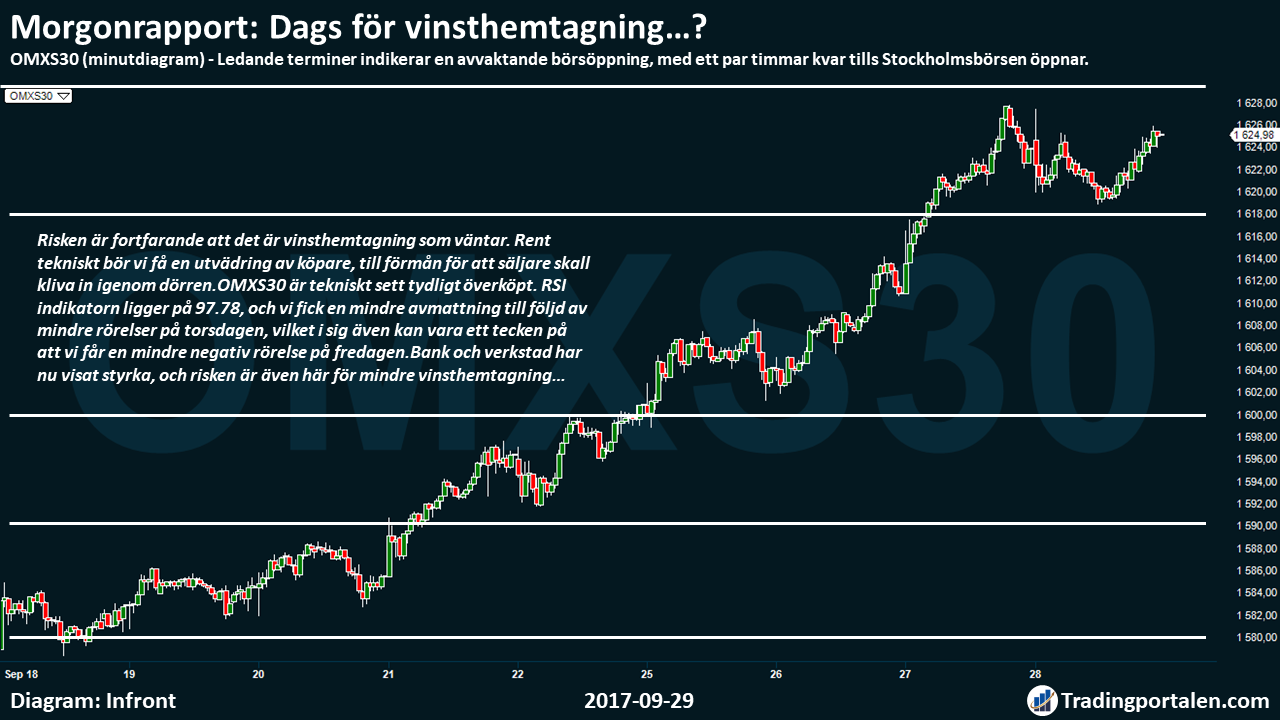 The risk is still that it is profit taking that is waiting. Technically, we should get a utvädring of the buyers, to the benefit of the seller shall step into through the door.

The OMXS30 is technically clearly overbought. The RSI indicator is at 97.78, and we had a minor slowdown due to less movement on Thursday, which in itself can also be a sign that we will have less of a negative movement on Friday.

The Bank and the workshop has now shown the strength, and the risk is also smaller profit, which in itself is two big indextunga sectors that control the OMXS30 index.

Point of equilibrium on Thursday was the 1622 points, the price quoted the most volume. This means that we can come to challenge this price level on Friday, and 1616 points of weakness begins to dominate during the day.

It would appear that on Friday, bidding on the 10th trading day in a row with köpstyrka left in the picture, well then there is a chance that we may see the OMXS30 to gnaw its way up to test the 1630 points.

A clearance of plus on Friday, preferably with increasing köpstyrka would mean that we, in principle, also breaks the basis of weekly, a negative ‘ vapour, which we in the short term almost done by the köpstyrkan that has dominated the last two weeks. 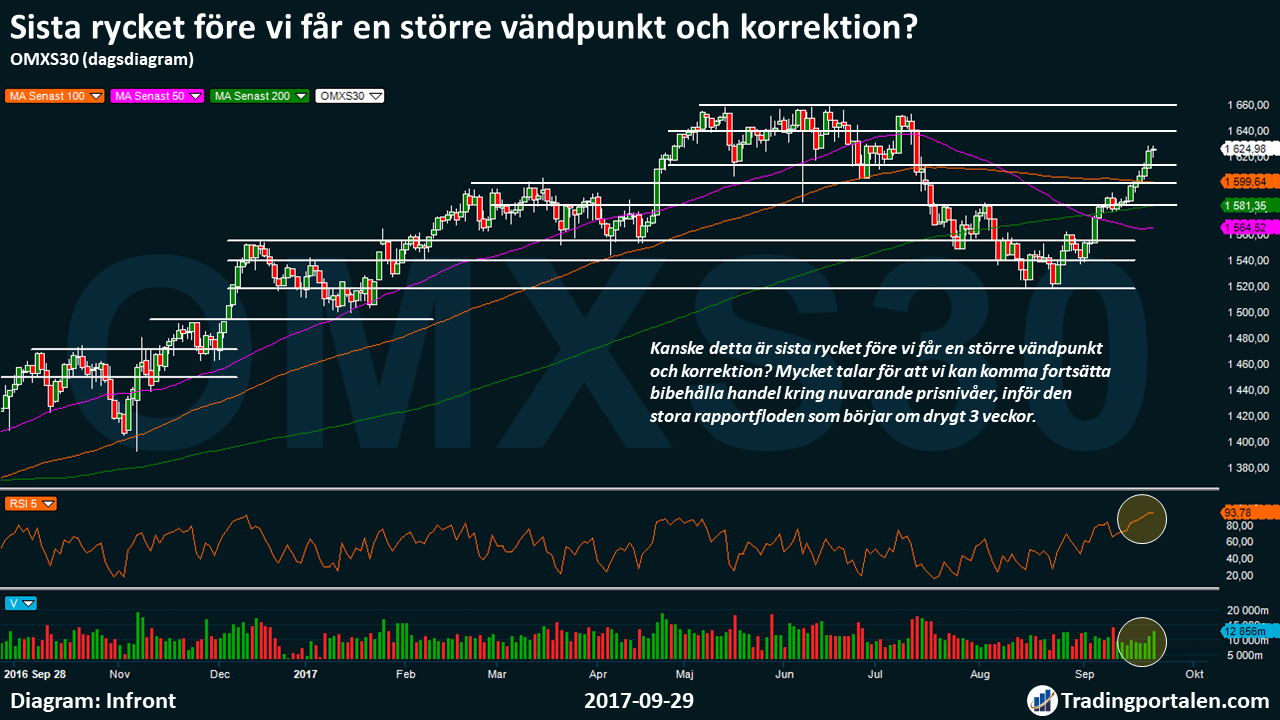 Maybe this is the last passengers before we get a major turning point and correction? There is much to suggest that we may continue to maintain trade at around current price levels, ahead of the big rapportfloden which starts in just over 3 weeks.

On Friday, there are no major corporate reports, or significant events. Based on the macro-perspective lands focus on the Riksbank at 10:00, with the issue of who will be Governor after the end of the year. Then we get the preliminary figures of the CPI in the EMU, at 11:00. From american press may at 14:30 private incomes and private consumption in August, likewise, the Chicago purchasing managers ‘ index september at 15:45.

Fell initially over the -5.0 percent,…

On Thursday fell H&M over the -5.0 percent after the report.

H&M reported an operating profit of 4.939 million for the third quarter of the split financial year 2016/2017.

Expectations according to analytikerkåren low an operating profit of approximately 4.901 million, while gross margin, which was 51.4 per cent came in under the expected 51.6 per cent.

In conjunction with the report, it was revealed that the company sees a “certain slowdown” in the sale the end of September, while the fall collection was a good start after the summer’s “aggressive summer sales”.

”As a result of faster lead times, more efficient varuförsörjningskedja and more purchases in the season there is a large potential to reach the lower varulagernivåer in the future,” wrote the company in Thursday’s report.

”At our capital markets day in February 2018, we look forward to have the opportunity to tell you more about how we meet up with the major changes occurring in the industry and how we should strengthen our position further in the future,” wrote H&M’s Karl-Johan Persson further in the report. 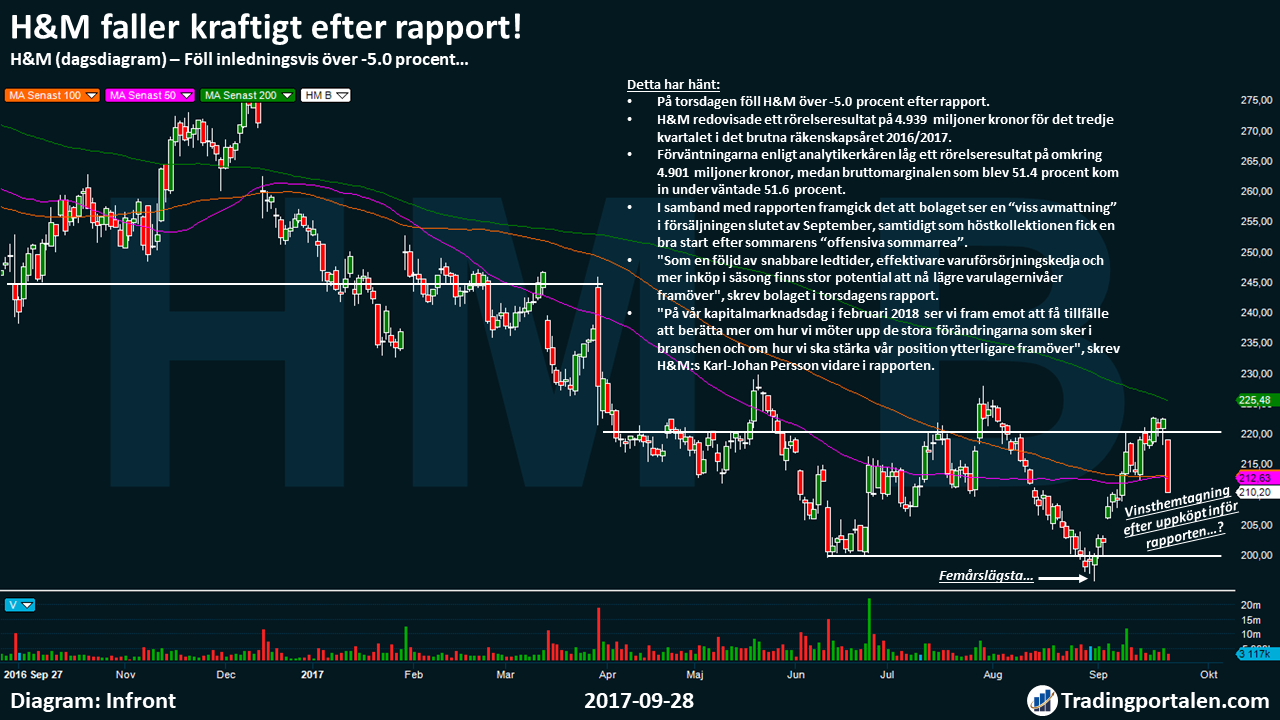 Swedish Match is challenging technical resistance after the rise.

Get the fuel to the renewed strength when Nordea raised riktkursen.

Swedish Match get the fuel to the renewed vigour on Thursday, after Nordea raises riktkursen for the company to 390 from the previous 380 sek.

”Recently, we have seen a return to rational behavior on the Swedish snus market, where all four major players will increase prices for the first time in six years,” wrote the major banks have as the repeated purchase.

Nordea believe that the price increases at the same time as the company’s repurchase, will mean that the company’s earnings per share could rise by more than 10 percent per year.

On 1 september, it was revealed that Swedish Match purchased the V2 Tobacco, a Danish privately-owned company engaged in the smokeless tobacco on the european market, with annual sales of approximately sek 160 million.

After Thursday’s rise challenged technical resistance at 284.50 £ on new. 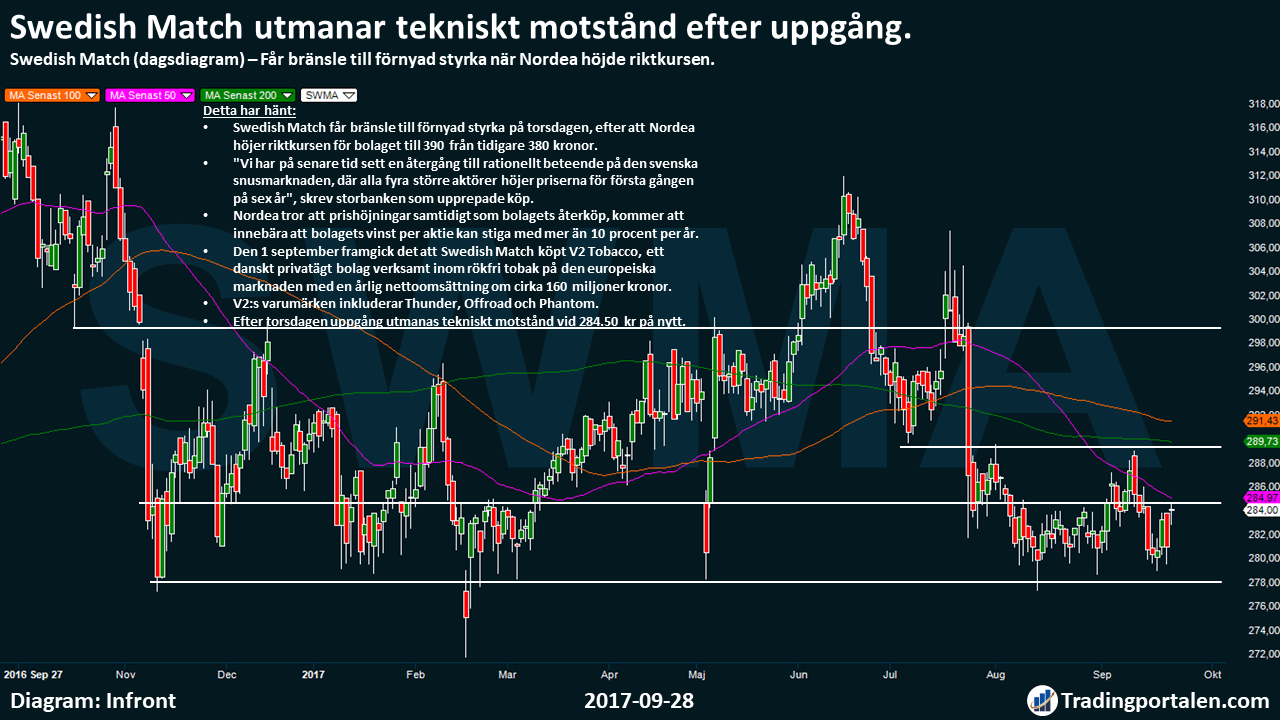 The bus company Nobina accelerate after the report.

Step initially over +7.0 percent on Thursday.

The bus company Nobina reported on Thursday a profit before tax of eur 74 million for the second quarter (June-August) in the split financial year 2017. According to SME direkt low expectations at 67.7 million sek.

Net sales amounted to 2.169 million, slightly below the expected 2.179 million. Sales growth amounted to 1.1 per cent, significantly lower compared with growth of 8.3 percent during the corresponding period in 2016.

In the half-yearly report lifted the company’s ceo Magnus Rosén presented that the underlying business continues to develop according to plan, even if the result during the bussoperatörens pressured by ”kontraktsmigreringar and the restructuring of the inter-regional activities”. Furthermore, the continued Rosen, ”the profitability of the nordic public transport continues to improve”. 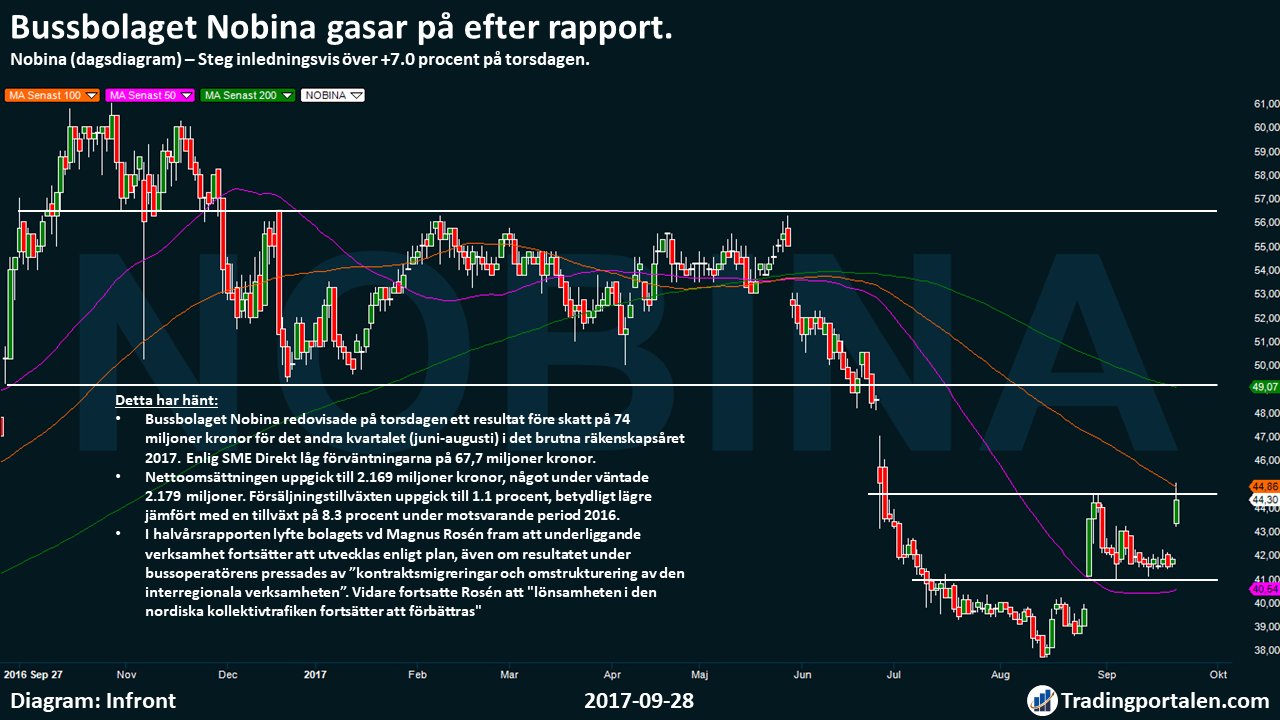 The stockholm stock exchange was trading at on Thursday near the zero mark. The european exchanges took note of the overall less plusnoteringar. H&M dropped sharply after the report, but could not prevent a ninth trading day in a row that ended in the plus.

Storbolagsindexet OMXS30 index ended up 0.1 per cent to the level of 1.625. The stockholm stock exchange net sales ended up at sek 17 billion.

”The stockholm stock exchange is overbought in the short term and I expect that the market will take a break to gather strength for the new gains later in the autumn. It would be both logical and healthy after the rapid rise we have had the last three weeks. Among sectors, we see a rotation from the workshop to the banks, with the support of the 10-year yield is at the highest level since January 2016”, commented Erik Hansén, market analyst at IG, the News agency Directly.

H&M shares dropped 5.1 per cent. Klädjätten accounted for a result which was largely as expected. The company stated, however, that towards the end of september seen a particular slowdown in sales.

Investment bank Morgan Stanley stated in a comment that the most surprising in the report was that the value of H&M’s inventories increased by 8% despite the readrivna the decline in the gross margin.

Cyclical shares were among the winners. Volvo, Sandvik, Atlas Copco and Sandvik step all marked.

The bus company Nobina reported a better result than expected. The stock rose 7.5 percent. The ceo Magnus Rosén said that the profitability of the nordic public transport continues to improve.

Loomis was up over 4% after having introduced new financial targets to 2021 in conjunction with its capital markets day. Objectives thus clearly fell in the good soil.

Medivir rose more than 3 percent after the ceo bought shares.

Even better it went for labtechbolaget Inhalation Sciences on Aktietorget, which rose 85 per cent in its debut. On Wednesday, it was announced that the company received an order from Astra Zeneca.

Kepler Cheuvreux initiated coverage of B3IT with the recommendation buy and target price of sek 95. Shares climbed more than 2 percent to 84:50 sek.

Swedish Match received a higher price target of Nordea Markets, from 380 to 390 kronor, with the repeated “strong buy” recommendation. Shares rose 0.8 per cent to just over 283 dollars.

Nanosatellitbolaget Gomspace continued his journey up. On Thursday, the share rose more than 11 percent after an order of 12,5 million. In the last month, the share price more than doubled.

Doro climbed around 5 percent after the Rite Ventures, increased its holding in the company to just over 9 per cent.