Back after a short break due to national day celebrations, we note that the stockholm stock exchange fell on Monday. Storbolagsindexet OMXS30 index fell -0.53% to the 1637.9 points. The turnover on the stockholm stock exchange amounted to low 10.4 billion, and was thus lower as expected. While Sweden were closed it was negative progressions that dominated the Tuesday, on the other hand, the leading futures slightly positive noises this morning, and perhaps this may be a sign of strength which means we will climb back over the technical nyckelnivån we closed in on the Monday…

During Monday’s trading we got the experience of domination among the sellers, and never managed to climb above resistance at 1650 points.

Sure we had a positive opening and dagshögsta in 1649, but a squeeze day before the national day, and the expectation of lower trading activity, it was domination on the vendor side.

Before Wednesday trading, pointing the leading futures early this morning on the weak positive progressions. Asia is noted around the zero after the night’s trade, and thus provides no clear board, however, traded in the u.s. the semester, the S&P 500 to slightly plus.

Because trading activity was so weak during the klämdagen, means the closure below the support level 1640 points on Monday, not any significant characters.

However, we need to ensure that we return to over 1640 relatively quickly, to not question the positive sign of strength that briefly arose in connection with that we stepped over 1650 on Friday. The risk otherwise is that we in the short term will revert back to a handelsintervall in 1630-1640 as we have previously experienced. 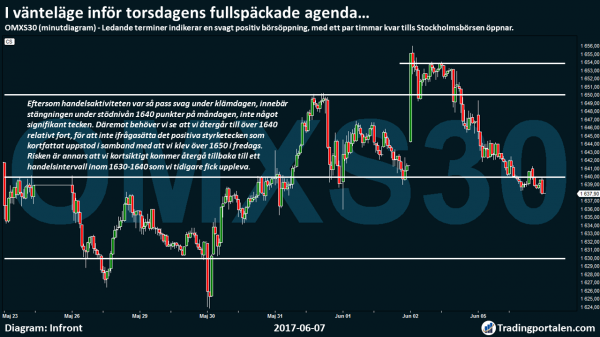 We note the higher bottoms in last few weeks, which in itself further strengthens our belief to on the rise.

Our belief in the continued positive upswing is still intact. However, a few negative outbursts had to challenge this.

Not least, we in the end of may during the 1630, but around the middle of the month, we got a serious rapprochement of 1600 points below the high trading activity.

Köpstyrka, however, has stepped back into the picture in these cases, and, overall, we still domination from the buyers.

This we can easily see the confirmation, because even if we were not able to break us further north to record a new high for the year, we have over 7 of the last 8 weeks received a closure at plus.

This contributes further to maintaining a positive faith, and we would primarily need to get a closing below 1630 and then 1600 with significant strength to challenge our long-term belief.

Before today’s trading, we keep thus track of a possible outbreak of the resistance level of 1640 points. A return and the establishment of this price level, would also be able to help with a positive momentum on the road to see a challenging of 1650 soon.

We would, however, be infected by from the negative trend that occurred in the big move around in Europe and the united states on Tuesday, yes then it is that we do not break the us in 1630 with the rage, and domination from vendors with significant volume.

Today’s trading at the same time means that we are in a certain sleep mode.

On Thursday, we have not only the interest rate announcement from the european central bank, but we have, above all, the british parliamentary elections. This means that we follow the news a little extra this week, as a result of this.

From the ECB, we keep an extra eye on if we get any more hawkish signals, then we are expected to have an unchanged interest rate announcement and QE program at this time.

We keep an extra eye on the foreign exchange market, with both the euro and the british pound is in focus in order to possibly get the initial clear movements on the executive board. 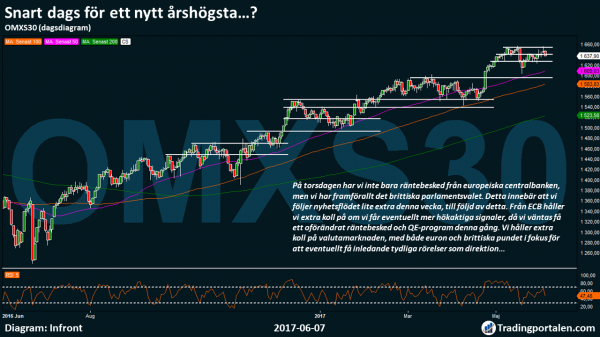 When it comes to the british parliamentary elections, so don’t close the polls until at 23 Swedish time, which means that we will not see an abreaction until Friday, when it comes to storbolagsindex. However, we would get to see the movements on the foreign exchange market already during the night in the event of a negative outcome for Theresa May, who triggered the election to strengthen its position in the face Brexit negotiations.

Worth noting is that Brexit negotiations are expected to begin already on June 19.

Kinnevik is testing the resistance level after the rise…

Step initially over 2 percent on Monday, after DI gives köpstämpel.

Kinnevik’s shares rose initially by over 2 per cent on Monday morning.

Fuel for the increase is Today’s Industry, who think ”a hefty discount when compared to most other investment companies and interesting portfolio companies make the kinnevik share share-buyable”.

”Once the new ceo is in place, one can think that some questions begin to be straightened out and it could very well lead to the stock market’s interest for the kinnevik share share-rising”, wrote at the same time, DI.

The newspaper also believe that the sale of Rocket Internet, will result in a dividend distribution will land at sek 8 next year.

The inledningsvisa rise to sek 258 sek, at the same time means that we are breaking ourselves free from the short term resistance at 250 sek, now to test the heavy resistance level at the high for the year 258 sek. 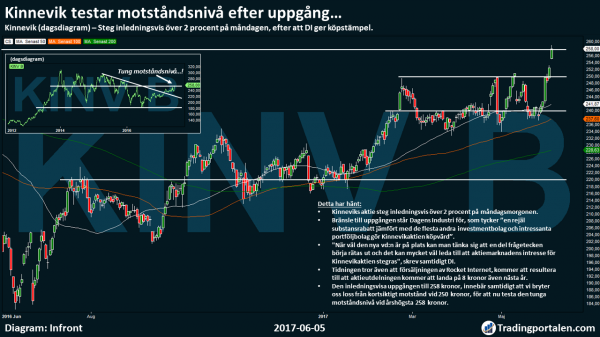 Step initially over 3 per cent on Monday.

The medical technology company RaySearch Laboratories is testing the all time high on Monday, after the company’s share early steps of 3 percent.

Fuel for the increase was Börsveckan, which put köpstämpel on the stock.

”Since the launch of the mjukvaruplattformen Raystation has the company gone from strength to strength. The growth rate has been high and margins are rising…” commented Börsveckan.

Perhaps we can now be on your way to get an establishment above the resistance at 254 kronor, after a clear sideways trading since the beginning of February? 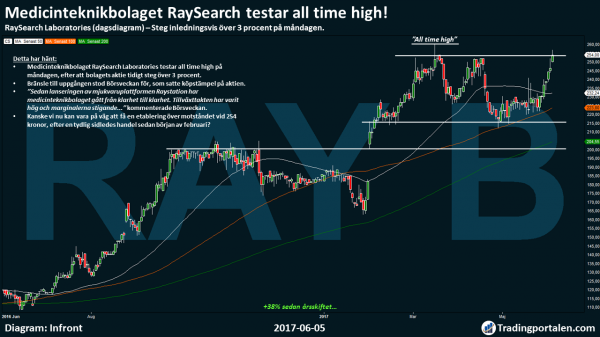 EnQuest challenge the heavy intensity after the decline…!

Falls in conjunction with Brent oil climbing back over $ 50.

EnQuest continues further to the south on Monday, and the challenge is now the technical support level at 3.710 crowns. This means at the same time, the share price deviates more and more from the fork in the road 200-day moving average, as noted at 4.151 crowns.

After a rise of over 1 per cent in the opening minutes, returned the stock at a steady continued decline, which has now backed the whole -2.26%.

Brent oil falls on concerns regarding the agreement within OPEC, Qatar in focus. After an initially rise when it emerged that saudi Arabia, Egypt, Bahrain and the United arab Emirates cut diplomatic ties with Qatar, backed the oil by almost one percent to re-be noted under 50 dollars.

The decline was also impacted fuel to EnQuest, which is now challenging the technical support level at 3.710 seriously.

‘Vapour pointing to an increased probability, for that we can get to challenge 3.200 in the future, when the current intensity that are challenged are in the outer part of the lower volymområdet within the 2.600-3.710 bucks… 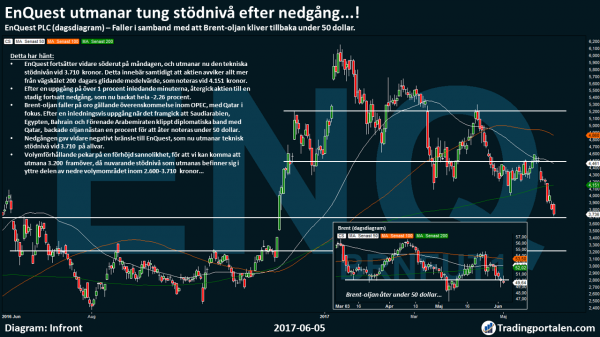 The decline on the stockholm stock exchange was expanded slightly in måndagseftermiddagens trade. Volvo was among the losers, while Kinnevik was one of a advice in Today’s Industry.

Helgstängda grannbörser and a thin news flow contributed to a relatively low turnover during the klämdagen in Sweden, ahead of Tuesday’s national day celebrations.

At the time of closing had storbolagsindexet OMXS30 index declined 0.5 percent to 1.638. The turnover on the stockholm stock exchange remained at moderate 10.4 billion. In Europe was the frankfurt stock exchange closed, but on the other leading stock exchanges synthesis also declines.

On the arabian peninsula, there has been great diplomatic tension when saudi Arabia, Bahrain, the United arab Emirates, and even Egypt has broken its links with Qatar, which is accused of destabilizing the security in the region and support terrorism. On Qatarbörsen raged courses sharply on the news.

Volvo dropped 1.4 per cent after a weak ACT-figure. The statistics, which came late on Friday, showed that the north american lastbilsmarknadens the intake of orders for heavy trucks fell by around 30 per cent in may, compared with april. Several analysts describe the fall as surprisingly large.

Even other engineering companies dropped. Atlas Copco and SKF were down 1.5 and 1.4 per cent, while Sandvik fell even more: minus 1.7 per cent. Among the big synthesis is also a nedåtrekyl of 0.7 per cent of Ericsson, after last week’s kursrusning ago Christer Gardells Cevian taken place in the list of major shareholder.

Kinnevik was on vinnarlistan. A hefty discount when compared to most other investment companies and interesting portfolio companies make the kinnevik share share-buyable, said Today’s Industry. Investmentaktien rose 1 percent.

Sobis business Partner Products will remain a part of the pharmaceutical company. Thus the terminated discussions regarding a potential sale of the business, as Sobi in the beginning of February, was going on.

”Our Partner Products portfolio in rare diseases is a valuable platform for our business. We have evaluated a possible sale of the portfolio and concluded that it should continue as an integral part of the Sobi”, said Guido Oelkers, president and ceo of Sobi. Shares lost 0.9 per cent.

Nordea Markets see a value of between 4:60 and 12:sek 70 per share in the biotech company Oasmia. It is a topical so-called order analysis from the bank, who thus got paid by Oasmia to do the analysis.

At the time of closing had Oasmia, which reports its financials on Thursday, has risen 7.7 per cent.

Terranet, which has, among other kriminologen Leif GW Persson and Sigmagrundaren Dan Olofsson in ägarlistan, continued to rush up 38 per cent during the intense trading after its First North debut last week. The share was traded, thus 200 percent of the listing price, which was sek 13 per share.