Köpstyrka revealed already initially on a Tuesday, and we got a new high for the year at 1658.5 points. Storbolagsindexet OMXS30 closed at a negative territory, with a decline of -0.35% to 1647.67. The turnover on the stockholm stock exchange amounted to 18 billion on Wednesday. The vibes are slightly negative after overnight trading in Asia, which means that we are expected to continue to be in our previous handelsintervall within the 1630-1650 points on Wednesday…

On Tuesday we managed to get a slightly better start than expected, and we got a new high for the year, as noted in the 1658.5 points.

However, we got a shift in the positive vibes around lunchtime, and we closed finally below our technical support level 1650 points.

Before Wednesday trading, this means that we are expected to continue within our handelsintervall 1630-1650 points.

Leading futures point to a slightly negative opening, with a couple hours left until the Swedish trade open. 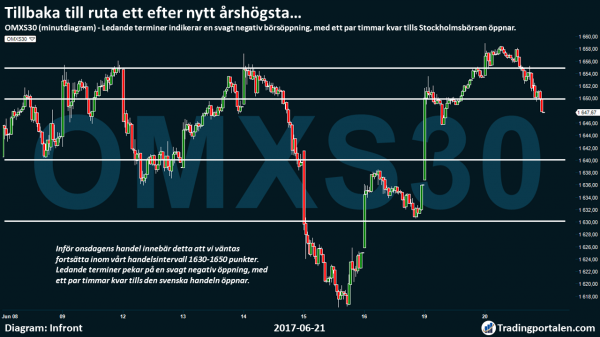 The oil has now fallen to the lowest level since 7 months back, and noted now for 46 dollars. We see a clear correlation among the companies that the Swedish Lundin Petroleum, and as we wrote in Tuesday’s råvarubrev, it will be interesting to see when the OPEC will with the next statement in order to try to give sign of strength.

However, we have not experienced any clear correlation from the Swedish OMXS30 index, which was the case in the beginning of 2016.

Tuesday’s development with a new high for the year we believe to be a further confirmation, that it actually is the concentrated effort is going on behind the scenes.

We have several companies that are recurrent notes new all time highs, despite this thesis, the strength to never end. Away in the united states, we continue to experience a similar sentiment and development, and u.s. companies like Amazon and Google have both stepped up to new record highs through the listing of 1 000 dollars in June.

As we previously noted, we believe that there is a high probability that we can get to get experience at least 1670 points, followed by a challenging of the 1700 points in the future.

However, the arguments shift fast, and it is important to be prepared. This means in brief that we keep an extra eye on our technical key levels, if these are broken during the relationship with the underlying significant purchases and sales force. 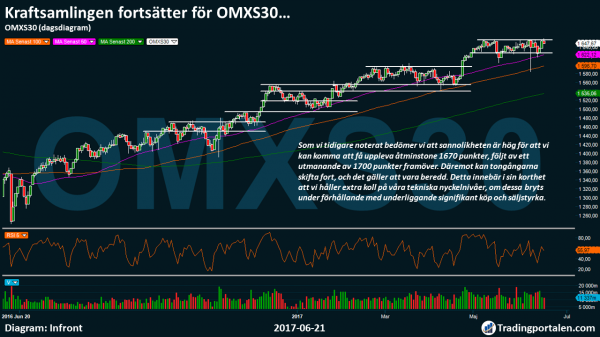 Until we have a clear outbreak, we anticipate that the build-up will continue.

This means that if we get a proof of the high for the year that is now at 1658.5 points, with relatively clearly elevated köpstyrka, this provides a confirmation to the on the rise.

At the same time, it means that like Tuesday trading, that we can get brief bursts when köpstyrkan not really manage to find momentum enough.

The same thing applies if we are primarily step in 1630 points, followed by 1600 basis points in the scenario where the salesman shows dominance. In the short term, however, we have intensity that awaits already at 1640 points on Wednesday.

This means that we ahead of today’s trading holds the technical resistance levels that await already at 1650, followed by 1658.5 points. Then await the 1670, but especially in the long term, 1700, and since previous all time high around 1720 points.

Technical support levels await even already at 1640 followed by 1630 points, but in the long term, awaiting even sentimental heltalsnivån at 1600 points.

Yesterday’s main börshändelser.
Electrolux step up to a new all time high!

Electrolux continues to the north for the third day in a row, and the steps simultaneously up to a new high for the year and an all-time high at 291.20 crowns.

Thus leaving the company’s share teeming 282 sek behind him, that was perceived as a fulcrum since the beginning of June.

The share has since the turn of the year has risen more than +29%, and has since the middle of June, scored two adjusted recommendations.

UBS raised on 19 June riktkursen for vitvarubolaget from 250 to 320 kronor, at the same time as the purchase was repeated.

Swedbank lowered, however, the recommendation to neutral from earlier buy, at the same time as riktkursen was left on 295 sek.

Despite the fact that Goldman Sachs took away the Electrolux from its so-called Conviction list on may 31, retained the investment bank of its köpstämpel. 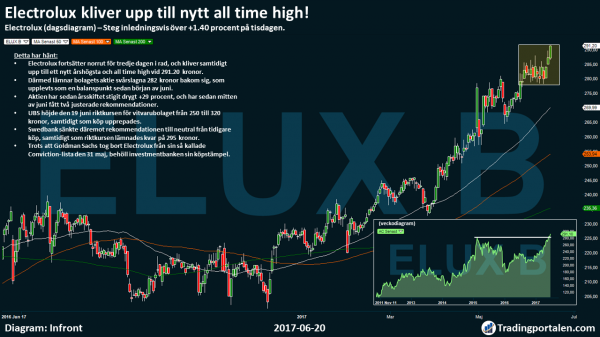 Castellum sharply down after the heavyweights sold.

Already on the Monday after the stockholm exchange closed, reported Bloomberg News on the basis of a mailing list from the SEB to the second AP fund engaged ABG Sundal Collier and SEB, in order to examine the possibility of a divestment of up to 13.2 million shares in the real estate company. 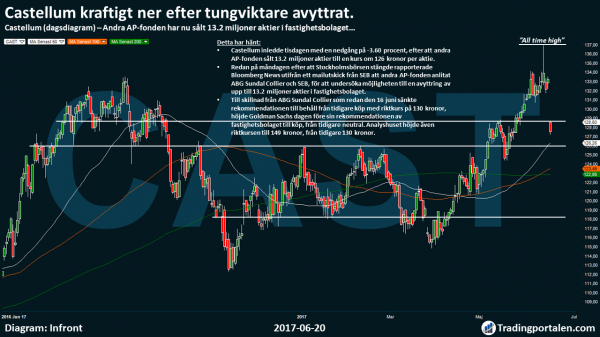 Hansa Medical is sharply up for the second day in a row!

Hansa Medical, the journey continues further north on Tuesday, which means that the company’s share now rising over +40% in a week.

The company already rose sharply on Monday, after positive fuel from RBC Capital Markets that left rekommendationenen outperform and the price target at 310 crowns on the company.

Recommendation of the RBC, however, holds a positive and a negative scenario for Hansa Medical.

In a positive scenario look by opportunities to rise to sek 540, at the same time, as an alternative negative scenario is presented with a price target of 140 crowns.

RBC highlighted at the same time, the speculative risk which is in the share.

On the Tuesday, followed Chardan Capital Markets by, as initiates coverage of Hansa Medical with a target price of sek 400. 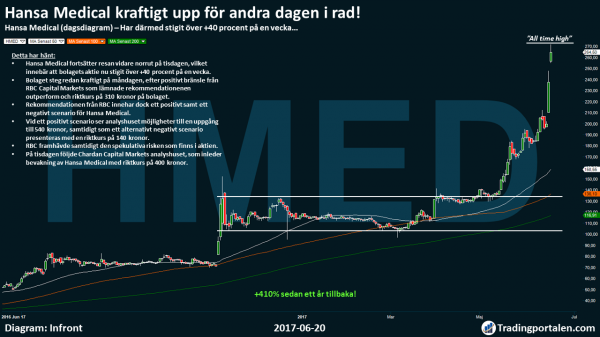 The stockholm stock exchange turned down on Tuesday, hampered by a weak råvarusektor and lower oil prices. SSAB held a capital markets day and maintained financial objectives, but its share price dropped.

At the time of closing was storbolagsindexet OMXS30 index 0.2 per cent higher at the level to 1.648. The turnover on the stockholm stock exchange was sek 18 billion.

In the US traded Reliance Steel & Aluminum lower after a profit warning on uncertain metal prices. In Europe were raw materials worst sector, with declines of close to 3 per cent on average, 3.3 per cent for the FEDERATION, which held a capital markets day.

Became part of, the financial objectives and the notion of demand being unchanged, and the designated branschutsikterna which is still uncertain, even if it is ”moving in the right direction”.

”We see a recovery in the us important segments, such as the mining sector. Of course, we see declining stålefterfrågan, especially in China,” said ceo Martin Lindqvist and found that the global overcapacity. Special Steel should nevertheless grow by 35 percent by the year 2020.

Astra Zeneca had the best development among the companies in the OMXS30 index with a rise of just over 1.2 per cent.

Swedish Match rose 1.2 per cent after being told about the repurchase of own shares for a total of up to sek 250 million.

Clothing chain MQ reported an increase in sales, strengthened gross margins and improved operating profit in the third quarter, which ended in may.

”The sales increases in both physical stores as e-commerce and the increase in terms of both chain concepts MQ and Joy”, commented ceo Christina Ståhl in the interim report. MQ-the share price rose 4.0 per cent.

Fingerprint Cards told me about the partnership for the smart card with the south Korean fintech company Kona 1. The share was trading 0.4 per cent higher.

Immunicum advanced 10 per cent. The scientific journal Journal for Immunotherapy of cancer provides an overview of the forskningsbolagets the first clinical study with ilixadencel, previously known under the name of Intuvax: Final median survival of 48 months are reported.

On the Aktietorget told modulhustillverkaren Zenergy if a letter of intent before a framework agreement worth 700 million. When handelsstoppet was lifted, the price from 3 to 7 sek 121 per cent.