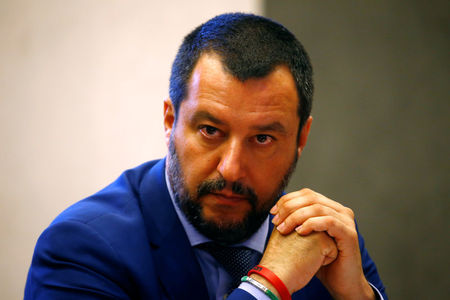 The vice-Prime minister Matteo Salvini, box score satisfactory to the european elections, said he would devote all his energy to change the “rules are old and obsolete,” the European Union and has strongly criticized the prospect of sanctions against Italy.

The leader of the party of the right Ligua, the dominant force in the ruling coalition following a decisive victory in elections to the european Parliament on Sunday, said on the radio (RTL:RRTL) 102.5 that he was waiting to see if Brussels has proposed a sanction in the face of the failure of Italy to control its debt.

The procedure of the european Commission would focus on the inability of Italy to control its debt, which could lead to a penalty of € 3.5 billion, according to sources close to the matter cited by Bloomberg.

Salvini was particularly criticized the very principle of a fine, while the country is already facing significant expenses, including the health system, lack of staff.

“All my energies will be devoted to change these old rules and obsolete,” adit Salvini. “If they want to, the leaders can sit around a table and, in 15 days, write new rules, to putting employment at the centre of concerns, and non-small figures – the new index of well-being should be the rate of unemployment. “

Note that the EU’s decision to sanction Italy could take place in the framework of the regular process for control of the EU budget, most likely the 5th of June, and would mark an escalation of tension between Rome and Brussels about the budget, a topic that had already largely undermined the markets at the end of 2018, before that Italy will not avoid the penalties through with the promises that it does not ultimately hold, obviously.

These concerns are transcribed in the bond market on Tuesday, investors are faced with the prospect of a new budgetary stalemate. The difference to German debt of maturity similar (the spread) rose to 289 basis points, a high of two weeks.

The CAC 40 and the pair EUR/USD remain under pressure in part because of these concerns.