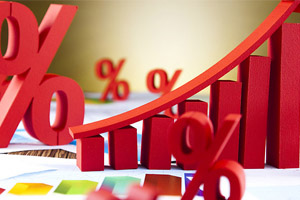 The interest rates are the tools of monetary policy enables central banks to manage inflation, which may prove to be harmful to term.

Concretely, when in a country, the inflation becomes too high, the central bank increases the interest rate to compensate for this dysfunction. The increase in the interest rate will then have an impact on credit institutions which will, in turn, increase their rate of credit and savings. The households will then be encouraged to put their money in these establishments in order to consume to a lesser extent for the moment and better in the future thanks to these investments. Logically, the decrease in consumption will lead to lower demand and then lower prices. In the end, by increasing its interest rates, the central bank has solved its inflation problem.


Relationship between interest rate and exchange rate
If the central bank of the United States chooses to increase its interest rates as was the case a few weeks ago, then the interest rate differentials on the u.s. dollar relative to other currencies in the foreign exchange market will be to the advantage of the u.s. currency. Investors will then be more likely to buy pairs of dollars which will increase the demand of us dollar and thus improve his appreciation.

To summarize in a simple way, the increase in the interest rate leads to an appreciation of the currency whereas, conversely, a decline in rates causes a depreciation.