Getinge is planning a new share issue of approximately sek 4 billion in order to strengthen the group’s balance sheet by reducing leverage and thereby create increased room for manoeuvre.

”Getinge is a strong company with good cash flows that could be used to strengthen the balance sheet. However, we want to act more quickly to create increased room for manoeuvre and therefore I guarantee this issue in its entirety”, says Carl Bennet, chairman of Getinge, in a comment.

As previously announced, preparing the Getinge group’s board of directors a proposal for a structural transformation where we divide the group in two operations, the Getinge and Arjo, to give the respective companies the best conditions to develop and realize their potential. The work with the planned division follows the previously presented plan and the final draft is supposed to be presented for decision at a later extraordinary general meeting.

Getinge’s board of directors sees good opportunities for the two activities, in respect of both the organic as the förvärvsdrivna agenda.

”With a lower level of indebtedness, we get a financial strength and create good conditions for the business in the future,” says Mattias Perjos, ceo of Getinge. ”At the same time, we continue our efficiency improvement programme, with unchanged power,” he adds.

An extraordinary general meeting is planned to take place in August 2017, for the decision to authorise the board of directors to decide on the rights issue. A more detailed schedule will be presented during the upcoming month. 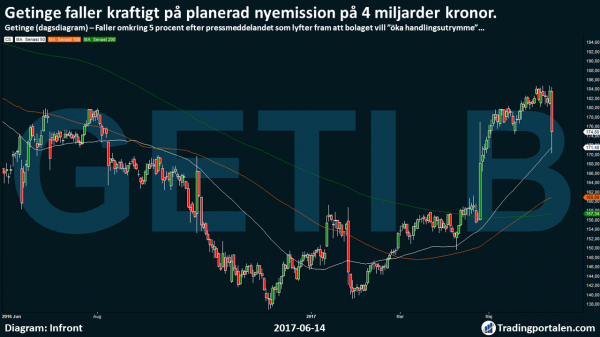