Even the British say it. In the field of green bonds, project bonds for the financing of the projects participating in the fight against global warming, which has been flourishing for the past four years, France has made a step ahead since the COP21 and should keep it, according to the bank HSBC, one of the first arrangers of global green bond.

Presenting to the press this Thursday, a survey conducted among investors and companies around the world on their attitudes towards sustainable finance, the uk bank, which competes with Credit Agricole CIB and JP Morgan the first place on the global market for green bonds, has highlighted the maturity of private and public actors in French in the field, which are reflected in the figures. France is number one in Europe and number three in the world.

“France is far ahead of everyone in Europe in the finance green. There is a higher consciousness in the whole society of the need to be sustainable and responsible, this is seen in the street, on the label of a jar of cosmetics or the card of a restaurant. It is a virtuous circle that goes from the State to the public opinion from great companies, ” noted Victoria Clarke, head of Green Bonds at HSBC for the area Europe Middle East Africa.

The world number one this year

According to figures compiled by HSBC, France is in the top 3 worldwide emissions of green bond carried out since 2013 (all categories, public sector, corporate, financial institutions), with 13% of the total, behind China (17% of the volume issued) and the United States (14%), but far enough ahead of Germany (9%) underlines Frédéric Gabizon, the head of market the primary bond of HSBC France.

On the year 2017, the France is a leader so far with $ 17 billion issued on a total of 97.5 billion, ahead of China ($14.4 billion, in sharp decline compared to last year) and the United States (6.7 billion, down also). There are, of course, the impact of the huge OAT green issued last January by the French State for € 7 billion, the largest green bond sovereign ever issued.

If you look at all of the green bonds in existing, issued since 2005, according to figures to June 30, 2017 report from Climate Bonds Initiative, HSBC, France is also the third largest in the world ($32 billion), tailgating, China, the United States being number one in more than $ 40 billion – the major supranational agencies are in the lead if you add the european investment Bank, the world Bank, the German KfW, etc 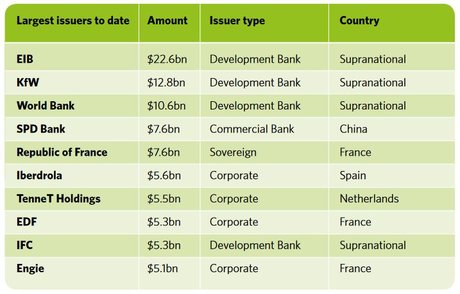 [The biggest emitters of green bond to date, amounts, categories, and countries: the French State, EDF and Engie in the first 10. State of the market in 2017, Climate Bonds Initiative, HSBC]

The position of France is confirmed over a long period and should be durable, as it is among the largest issuers of corporate bonds in green, in particular with EDF and Engie, who have several billion euros of their assets.

Holding a one-day finance climate on the 11th of December and the Climate Summit organized by Emmanuel Macron on 12 December in Paris, two years after the signing of the Paris Agreement at COP21, will probably be occasion to announce new projects in the field.

“There’s a lot more demand of investors, a lot more than offers. A loan green does most of the extra cost that a bond classic, its cost can even be lower, ” observed Frédéric Gabizon, HSBC France.

However, it should be able to find scale projects to be financed (energy efficiency, renewable energy, etc) to justify a green bond standards compliant, and sufficiently liquid to interest investors (with a size of at least 500 million euros), which is not so simple.

“If the growth is exponential, with the volumes that have doubled in the last year, green bonds still account for only 1.5% of the total bond market “, has qualified Victoria Clarke. “The forecasts for this year range from 90 to 200 billion, I expect $ 130 billion over the whole year 2017, compared to 96 billion last year. I think that in the next ten years, the share of green bonds could rise to 5% or 10% of the market, ” she predicts.