The interest of the investor for startups of the finance does not fail : if the trend observed in the first half continues, 2017 is expected to exceed the historical level of the past year, number of transactions, according to the firm CB Insights has just published its second quarter report on the financing of the sector of Fintech. The deflation of the “bubble” will have been short-lived.

Over the last three months, there have been 251 fundraising companies in the Fintech supported by venture capital funds (pure financial or corporate venture of large industrial groups) in the world, for a cumulative amount of $ 5.2 billion (+83% compared to the first quarter). It is a record, a few million close to the previous over-top the third quarter 2015, thanks to a mega-deal, in particular, the investment of $ 1.4 billion of the japanese SoftBank in the indian One97 and its mobile payment system in full swing, Paytm. 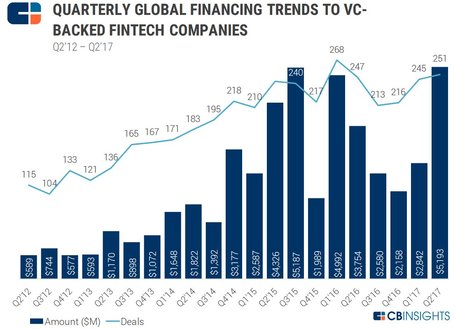 [Financing of companies in Fintech in the world of funds of venture capital (VC), number of transactions, and the amounts raised, per quarter. Credits : CB Insights]

Also read: “what is Fintech ?

Since January, a total of 496 operations that have taken place for a total of $ 8 billion. “At the current rate”, the amounts invested throughout the year in the Fintech might end up 19% and reach “record levels” highlights CB Insights. Extrapolating, we could approach a thousand rounds and exceed the 15 to 16 billion dollars raised. 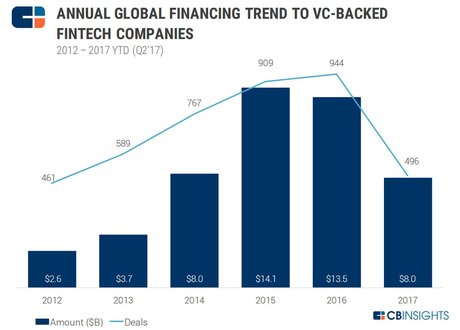 [Financing of companies in the Fintech funds, VC, by number of operations and the amounts raised, per year since 2012, about six months in 2017. Credits : CB Insights]

This second quarter has seen the birth of five new “unicorns,” these companies valued over a billion dollars before you even enter the Stock market : CB Insights has identified 26 in the world of Fintech, 15 of which are north american, such as Stripe, SoFi and GreenSky, and the new AvidXchange, Robinhood, Clover Health, and Symphony, 7 of them are asian (of the giant chinese as Lu.com or the indian One97), and 4 are european, namely the Dutch Adyen, sweden’s Klarna and the british TransferWise and Funding Circle.

In total, these rising stars, who have nothing more to startups and employ hundreds of employees, representing a recovery of 83.8 billion dollars. The equivalent of the market capitalization of a very big bank in the euro zone. 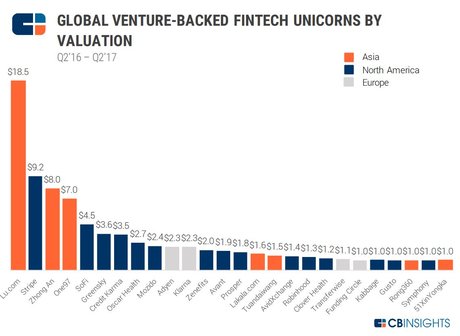 There is (for the moment) no French in this closed club of the stars of the hypergrowth “billionaires” in valuation.

Petit Poucet ” of the Fintech, France is still characterized by the raising of funds of small amount (10 million euros in Qonto for example) and a tendency of the redemption by banks (with the image of the platform of crowdfunding KissKissBankBank by the Postal Bank, or the Account Nickel by BNP).

In contrast, the Germany between in the great court, with the biggest fundraiser of the european quarter, signed by Kreditech (110 million euros), which allows him to compete with the “tour de table” of Fintech in the us (130 million dollars for Clover and $ 107 million for the startup of the Blockchain R3, supported by, among others, Natixis, Société Générale and BNP Paribas). 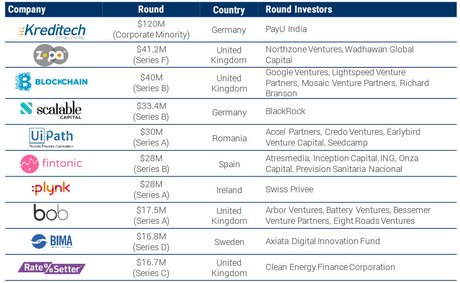 Europe seems to be well on track to reach a record level of funding in the Fintech, with 134 laps from the table to a cumulative amount of $ 1.2 billion in the first half, the equivalent of the funds injected on the whole of the year 2016 or 2014 : the year could finish on a level never reached 2.3 billion dollars raised in this sector.