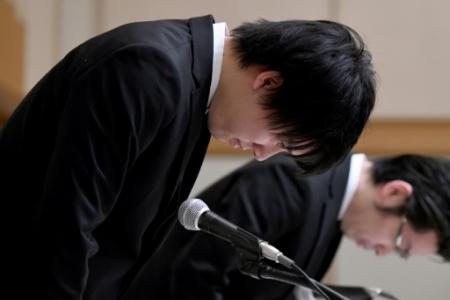 Yusuke Otsuka, chief operating officer of Coincheck during a press conference in Tokyo, on 8 march 2018 (Photo by Toru YAMANAKA. AFP)

The japanese authorities were ordered Thursday to two platforms local trade in cryptomonnaies to temporarily cease their operations, among other sanctions addressed to actors in the sector after the piracy giant suffered by Coincheck in January.

In a press release, the agency of financial services (FSA) said it had ordered the platforms FSHO and Bit Station to stop their operations for a month from Thursday.

According to the agency, FSHO ‘does not have an effective system of exchange control and has not trained its employees”, while an employee of Bit Station “has been hijacked by deposits of virtual currency in some customers for his personal use.”

The two platforms were not reachable in the immediate future to react to this decision.

The authorities have also charged five other platforms, including Coincheck, to improve their practices.

After this announcement, the price of bitcoin, the major virtual currency, has fallen more than 5%, passing under the bar of $ 10,000.

He fell in with the 9.600 dollars, according to figures compiled by the financial data vendor Bloomberg, before coming back around 9.950 dollars around 08: 00 am GMT.

Coincheck had already suffered administrative measures after mass piracy that it was known in January that resulted in the loss of the equivalent of $ 530 million in cryptomonnaie NEM.

After this flight, the most important in the history of the virtual currency, the company is committed to repay about $ 400 million to cover 260,000 customers affected.

During a press conference Thursday, Coincheck, has stated that it intends to begin repaying its customers affected by the theft and to resume its operations as soon as next week, adding that details would be clarified later on its website.

Its chief operating officer Yusuke Otsuka pointed out that the system of the company had been hacked after several employees have opened e-mails containing malware.

The platform has not managed to update its systems to track the rapid pace of development of the market cryptomonnaies, he added, noting that it would strengthen the restrictions of access to its server.

When asked about possible resignation of company officials after the incident, the CEO of Coincheck, Koichiro Wada, said that the group “is in a review process, and that this includes (the option)”.

In February, seven customers of the platform (the two companies and five individuals) filed a complaint against Coincheck, requesting a refund of their lost deposits but also compensation for interest lost as a result of the incident.

After this hacking, the FSA had carried out some searches within several platforms, the local exchanges and had asked a dozen platforms to render an account of their efforts to manage risks to the security of their systems.

Since last year, the japanese authorities have tightened the rules with respect to these exchange platforms cryptomonnaies, who must register with the FSA.

At the time of the hacking, Coincheck had not yet obtained such a licence but had received permission to continue to operate pending a decision of the regulators.