No gift between ex-fiancés. Deutsche Börse, the operator of the Frankfurt stock Exchange, which had to give in march for her wedding to the London Stok Exchange (LSE), the London stock Exchange, launching an offensive front in the clearing – the essential cog of the financial markets, which ensures the good technical exchange of stocks, bonds and other derivative products, after having been traded on the stock Exchange. The Offensive was to target the great leader of the market, LCH, controlled by the LSE.

The platform Eurex Clearing (owned 100% by Deutsche Börse from the redemption of units of the swiss operator Six in 2012), announced Monday a “partnership program” intended to develop “an alternative liquid, located in the EU, for the clearing of interest rate swaps”.

“This market will benefit customers and the wider market as a whole by offering more choice, more competition and more transparency on prices and less concentration of risks”, argues the ceo of Eurex Clearing, Eric Müller, in a press release.

The objective of Eurex was to create a “balanced ecosystem in which the responsibilities and the gains are fully aligned between the participants” : the ten most active will receive part of the profits made on the clearing of interest rate swaps, depending on the volume of business brought in.

However three-quarters of derivatives denominated in euro are currently dealt with in London, through the service SwapClear of LCH.Clearnet : the order of 475 billion euro per day, for the bulk of interest rate derivatives.

Large banks, notably in the us, among the biggest players on the european market of interest rate swaps, have already expressed their interest, according to Eurex, such as Bank of America Merrill Lynch, Citi, Commerzbank, Deutsche Bank, JP Morgan and Morgan Stanley. The head of the derivatives, clearing and collateral at Citigroup, Jerome Kemp, praised the program :

“We welcome this initiative of the market which encourages diversity of choice, flexibility and transparency for our customer base globally,” he said in the press release.

Same speech on the side of JP Morgan including co-head of trading rate considers that “this initiative will bring greater choice and more transparency to the market while providing greater resilience and diversification of risk. We consider that this is an important development that will benefit all the participants.”

Eurex Clearing emphasises that its platform, which processes 180 million transactions per month and has passed the bar of 2,000 billion of interest rate swaps last July. 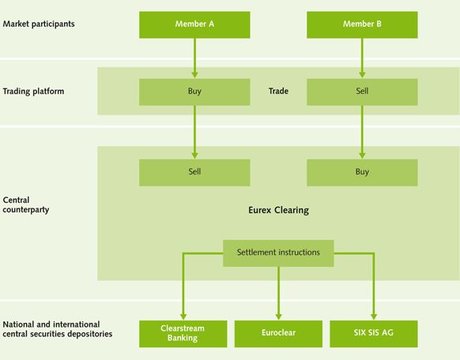 His offensive comes at a time when the european Commission has threatened to impose the resettlement in Europe of the clearing of derivatives denominated in euro after the Brexit, officially to questions of systemic risk, but also to issues of sovereignty.

“The exposure of the EU clearing houses in third countries will be exacerbated with the programmed output of the United Kingdom of the EU in 2019, it will lead to a shift of the risk out of the EU”, was alarmed the Commission.

Some professionals, in the image of the organization among the stakeholders on the derivatives (International Swaps and Derivatives Association), were a little worried about the risk of inflation of the compensation that would create these new provisions.

In the month of August, the operator of stock Exchanges of Paris, Amsterdam, Brussels and Lisbon, Euronext, who was not able to redeem the French branch of LCH on the London Stock Exchange after the failure of the merger with Deutsche Börse, had finally announced the renewal of its agreement with LCH for clearing of the derivatives for ten years.