Tesla is a company with many irons in the fire and it feels a bit like they can be on time to take the ”patent” on the epithet Electric car a little in the same way as the iPhone is synonymous with the term Smartphone. When it comes to the share, is at large in a positive trend that has all the prerequisites to take out towards new All time highs. Perhaps it is time already now!

Tesla is in great move in a positive trend and was successful in 2016 to break out of a prolonged consolidation phase. From november last year, the shares have trummat on more or less continuously up next to a peak on June 26 this year. Seen from the top seems Tesla have entered a phase of consolidation and has basically moved sideways even though we had a marginally higher peak on 18 september.

We provide ourselves on interpreting the formation and then in June in the summer, we see that both tops and bottoms get higher and higher with each swing, which is not rarely leads to a positive movement in the bigger trend direction, where the share is well shooting speed. A so-called bullish triangle.

In the current situation, we have the support, both in the form of the proposed triangle kanalgolv around 335 dollars, but even at 325 dollars which is relevant from a Gann-perpektiv. A first resistance, we find on the 361 dollars and then the herons to syvene and last 401 dollar is the lowest level that Tesla should be able to reach before, the positive trend can potentially reach way only.

In the short term, we note that yesterday it was 90 days ago top on 26 June, which always is interesting on the basis of a 30-, 60 – and 90-dagarscykeln. It is not unlikely that we, given that it looks like we may have five waves down on the time since the peak of the 18 september will be a positive reaction in the market. If we got a bottom yesterday or if it can come today or tomorrow. 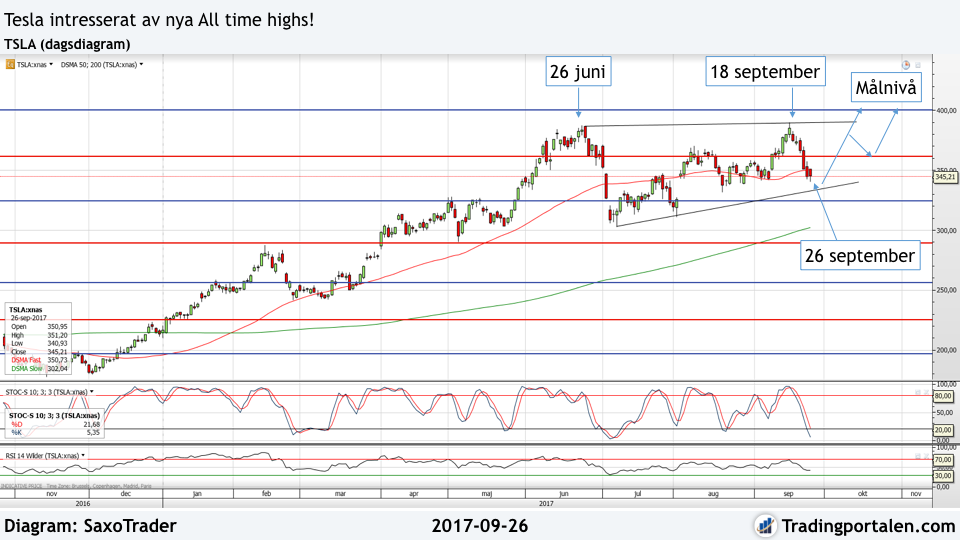 Our trend filter in the form of the 50 – and 200-day moving average don’t give us any unexpected information, but the trendar on the up. This means that the trend is pointing up on both the medium – and long-term.

The daily oscillators are not completely printed at the bottom. Even if the Slow stochastic to come down towards the oversold levels, we see that RSIn has a little bit left. At the same time, so are the shares in a situation where it does not necessarily need to be obvious oversold.

We are positive to Tesla above, in the first hand 335 dollars. The idea is to attempt an entry around current price around 345 dollars for a marginal new All time high against the 401 dollars. A stop-loss can be placed at 325 dollars.

Tesla reports towards the end of October and as usual, one should be careful with positions around the reports because they often generate sharp movements.