Swedbank has during the second quarter of this year, have begun to show positive attitude. A brief decline occurred in the beginning of may, but was caught up by heavy technical support level at the low for the year. Then, the shares have repeatedly challenged the heavy fork in the road in the form of MA 200, and the underlying momentum looks to be of a positive nature, which opens up for a nice turning point…

After a negative conclusion of the first quarter of this year, we have got a introduction of the second quarter in a clearly positive attitude.

Despite this, Swedbank has since the end of the year lost just over 5 percent, but now looks to recharge for the further upswing in the future.

Positive attitude prevails, we have found clear land at the challenging of the year low just under 205 kronor, at the same time as we during the last few weeks clearly challenged the 200-day moving average.

This heavy fork in the road in the form of MA 200, pointing also to the north, which is positive.

On Wednesday, challenged the short-term MA 50, while the share is listed just above the technical support level at 209 sek.

Despite a small decline, stands out not of the sales force, which we see as an underlying strength behind the curtain.

We see good opportunities for a turning point at 209 crowns, which we believe will open up for a rise to challenge 218 sek in the future, which is expected to provide a clear opposition when we noted a significant interest from vendors and buyers at this price level.

If over a month it is also time for yet another rapportflod, including Swedbank, which leaves the interim report on 19 July, which may be worth to take in mind if målkursen would not have achieved its.

Swedbank has also recently made an interesting acquisition. Betalningstjänstföretaget Payex, which includes a number of companies in Sweden, Norway, Denmark and Finland have been acquired according to a press release on may 10.

”Through the acquisition goes Swedbank into a new market and complements its efforts forward in order to meet customers ‘ needs for comprehensive digital solutions to betallösningsmarknaden”, stated the bank.

The company will continue as a wholly-owned subsidiary, which has its headquarters in Visby.

The stock is traded on the stockholm stock exchange, under the symbol SWED A. 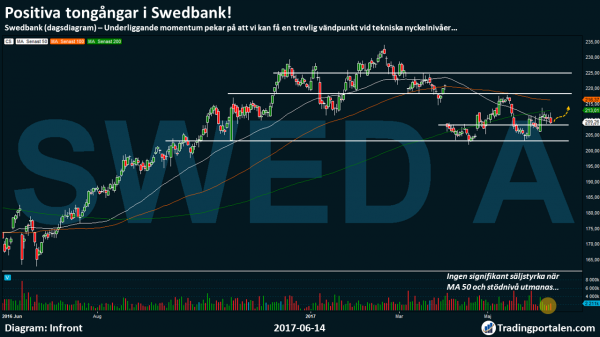