It has been very positive signals lately and sell signals need to be confirmed with a lower peak of at least thirty days after a presumed such, you need to have patience. Now we don’t have it anymore when Goldman Sachs indicates that the trend from lågpunkten on 28 June last year may well be right. Finally time to get some negative positions, albeit short-term ones, in the portfolio!

Although the major cycles timing does not seem to have fallen into place for a major top in Goldman Sachs, we have indications that something has happened in the medium term. Even if the important level of the price of 249 dollars were taken out over a number of days so it was a warning signal when the stock failed to break up above the 249 dollar again, but came back down again. Because 249 dollars form a 180 degree relationship with last summer’s bottom at 139 dollars you need to be awake for at least a rebound.

What we then monitor is if the new trend is capable of persist longer than the last phase of the previous trend. The conclusion of the coverage is that the first phase of the recoil at least have managed this. Now when we see that the price has fallen past the bottom from the 27th of march is the likelihood of more nedsida relatively large.

What we in the best of cases have to do with is a larger trevågs sequence down to correct the rise from last summer. And with that we have passed all 180 and 360 degree relationships, on the way down so far, we are now aiming at the next. In a positive interpretation, should the current downturn to be able to at least reach the 195 dollar level. 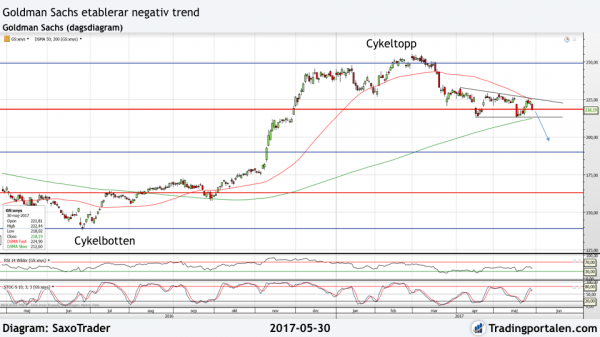 The daily oscillators have recently been turned down again and the 50 day moving average is inclined steeply downward indicating a negative trend in the medium term.

It looks in conclusion, the hassle out of Goldman Sachs in the short to medium term. The idea is to short the shares at a closing under 218 dollars with a target of 195 dollars. Our emergency exit in the form of a stop-loss is placed preferably at the most recently set of peaks in the current consolidation of 225 dollars.