Earlier in the year, specifically on may 3 warned that something big could be going on in Gilead Science. Share flackade, lost almost the grip but then came running heavily. After a moment of consolidation and the establishment of the key level, it may be time for another lift!

After Gilead Science broke the falling trend in the middle of June in the year has not looked back, but pulled further upward after only a short consolidation. The bottom came in at 63 dollars, and the share now trades around 83 dollars.

To share the just had shorter phases of consolidation indicates that there is a lot of energy in the current movement, which does not specifically mean that there will be leverage on the upside, of course, but after that $ 80 level is taken out is indicated higher rates within the framework of the current phase.

So far, the movement has in GILD harvested five waves. However, we see quite clearly that the middle wave is the shortest of the three movements upwards, which then it does not count as a femvågssekvens as the third wave cannot be the shortest. It is in a positive interpretation, therefore, likely that the stock from an Elliott wave perspective inside a third wave usually is the strongest phase in a trend and which tend to be extended. We are looking for a schematic now, after nine clear waves up. 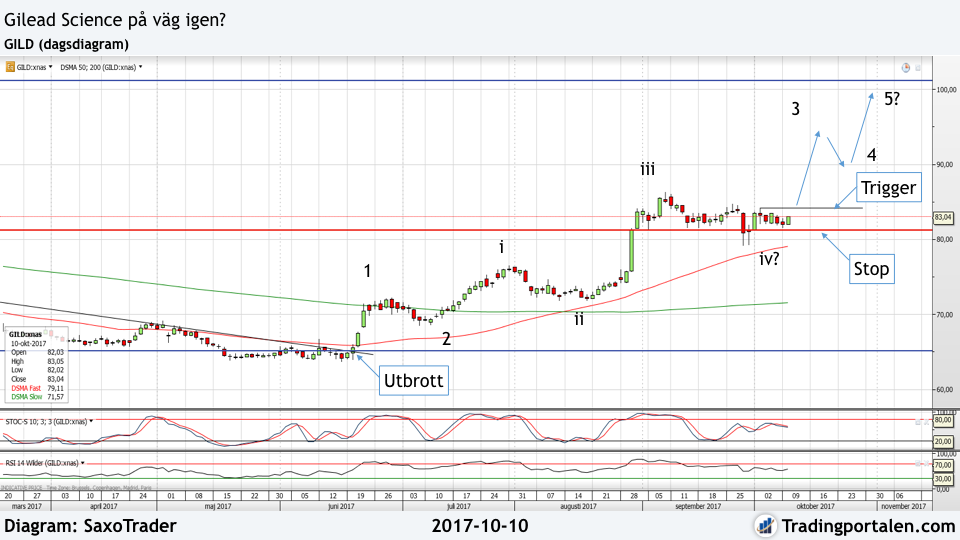 Gilead Science has in the short-term perspective, an important support at $ 80, which preferably should not be undercut for continued pressure on the upper side. The nearest long-term resistance of the dignity we find in fact not until just over 100 dollars! In the short term we have resistance at 84%, 86 dollars.

The share has, so far, within the framework of the current movement, mäktat with a peak on 8 september at just over 86 dollars. And put a the bottom after a trevågssekvens down on 28 september, whereupon the share set off and started a short-term consolidation.

The plan is to buy the stock of an eruption above 84 dollars for a slightly larger movement towards 100 dollars. Our emergency exit in the form of a stop-loss is set as a daily closure below 80 dollars. Gilead Science report at the end of October, specifically, the 26. Is not the position at a reasonably good plus then one should consider to close the position because the reports tend to be able to create sharp moves in both directions.