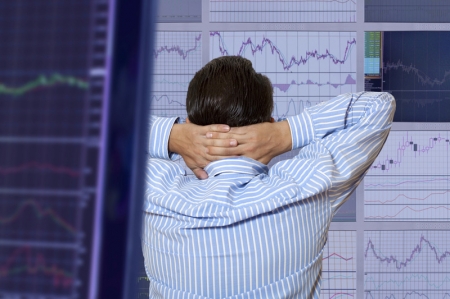 Even if it is the United States that are under the spotlight in recent weeks with the trade war against China and a potential military conflict with Iran, it should not be forgotten that Europe also worried the market.

This is particularly visible in the bond markets, which seem to warn that the Old Continent could soon be the scene of major crises in the United Kingdom and Italy, which could trigger an economic recession in Europe and promote a global economic recession.

A clear sign that the bond markets of the world are very concerned about the european economic outlook is that about half of all government bonds european now offer negative interest rates, with growing gaps between the returns of the stronger countries, like Germany, and those countries that are less strong, such as Italy.

It is normal that the bond markets around the world are sensitive to economic risks.

However, what is particularly disturbing is that there are an unusually high number of risks, particularly in Europe, who have great chances of becoming reality.

We will therefore review in this article the 3 key risks which could lead to a recession in Europe in the coming months :

Among the most immediate risks, we find the Hard Brexit, that is to say, the possibility that the United Kingdom, the fifth largest economy in the world, so the EU without an agreement on October 31.

The Bank of England and the IMF warn both that such an event would most probably result in a decrease of 5 % of the economy of the United Kingdom in the year immediately following its exit from the EU.

But given the importance of trade with the United Kingdom for Europe, Brexit hard would necessarily have significant impact also on the european economy already degraded.

Boris Johnson, who is almost certain to become the next prime minister of the United Kingdom, is committed to ensuring that the country is leaving Europe with or without agreement on 31 October, which increases the chances of Brexit hard.

Let’s recall that it was on this date that the extended period of the United Kingdom to negotiate an agreement of Brexit will end.

Apparently, the only thing that could prevent a Hard Brexit would be a vote of no confidence passed in the government before the 31st of October.

However, this would in this case reflect the possibility that Jeremy Corbyn, the head of the labour party, very hostile to the market, could become Prime Minister. This could seriously undermine the confidence of uk investors.

A more serious threat, although less imminent, for the global economy is the risk of a new crisis of Italian sovereign debt that could pose a risk of contagion to other Euro Zone countries and constitute an existential threat to the survival of the Euro.

In fact, it would be much more difficult to save Italy and Greece in 2012, given that its economy is about 10 times larger than that of Greece.

However, the way policy is imprudent in which the government has committed to a populist Italian increases the risk of a debt crisis.

While the country already has the second-highest debt the highest in Europe, behind Greece only, the Italian government insists on the implementation of a major tax cut that would bring its budget deficit to about 5% of GDP.

Mattéo Salvini, who heads the party Ligua eurosceptic, is already threatening to withdraw from the government coalition and force new elections if he does not get gain of cause on the proposed tax cuts.

And to the extent that his party won 34% of the vote in the recent European elections, which is two times more than its coalition partner, a government with Salvini in his head is a possibility for later this year, which should not fix the situation.

The aggressiveness of the trade policy US is another major source of risk for the european economy. It should not be forgotten that the threat of a Trump to impose customs duties of 25% on european car in the course of the year remains in limbo.

Germany in this case would be particularly affected, which would almost certainly lead the country into recession, which threatens already.

The EU has already warned that it would respond blow for blow if Donald Trump puts his threat in execution, which means that we should expect further tariffs by the suite, Donald Trump having the habit of raising in the face of the retorts…