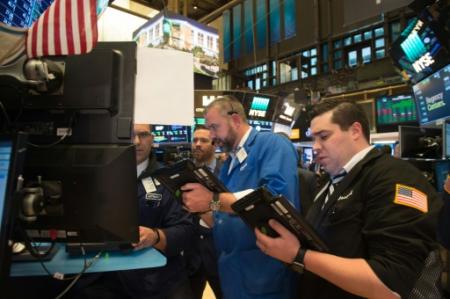 Wall Street climbed to new records on Friday, driven as it has been since the beginning of the year by investors ‘ optimism on the u.s. economy and the season of corporate earnings, which started this week.

“It is no use of crying wolf” in the face of implacable clues that donned the records since the beginning of the year, commented Gregori Volokhine of Meeschaert Financial Services. “When we have an economy that accelerates, companies whose profitability improved, this is normal.”

“The analysts have not yet incorporated in their forecasts the effects of the tax reform (…) and the stock market is simply the process of taking advance on them,” said the investment advisor to financial Hugh Johnson, for whom the growth of the u.s. economy by 2018 could reach thanks to this new law to 3.5%.

Of the money earned, “enterprises can either reward employees, or shareholders through the payment of dividends or redemptions of shares, which they have already begun to do that,” noted Mr. Johnson.

The question is whether they will also “invest in new equipment, buy new companies or increase their operations” in order to feed their growth in the long term, has underlined the expert.

JPMorgan Chase (NYSE:JPM) (+1.65% to 112,67 dollars), the first american bank in terms of assets, so insured in the occasion of the publication of its results on Friday that this law was going to allow him to increase his investments.

The tax reform was already in favor of Wells Fargo (NYSE:WFC) in allowing him to register in an extraordinary gain of 3.35 billion dollars in the 4th quarter. The bank has also set aside $ 3.25 billion of dollars to deal with the legal costs associated with various scandals including one on the opening of the 3.5 million fake accounts. The title has lost 0.73% to 62,55 dollars.

The side indicators, the price increase in the United States has been lower than expected in December (+0,1%) under the effect of a downturn in the prices in the energy sector. But excluding energy and food, the index of consumer prices CPI advanced 0.3% in December, the largest increase since January of 2017.

The bond market reacted significantly to these figures.

“What we need to remember of the report (on inflation), is that it should not change the idea that, for the Fed (the american central bank), three increases of rates this year are still on the table”, said Patrick O’hare of Briefing.

Among the other values of the day, Facebook was shaken (-4,47% 179,37 dollars) by the announcement of a significant overhaul of the content on the network, where priority will be given to publications that are shared.

Advanced Micro Devices fell from 0.99% to 12,02 dollars after having stated that his exposure to the security vulnerability Spectrum, which affects the industry of micro-processors, was more important than initially expected.