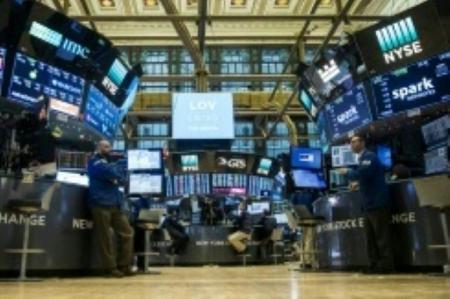 Wall Street declined on Wednesday to the fence (Photo . )

Wall Street declined on Wednesday to the closing, affected by the declining oil prices and the fragility always important in technology stocks even though u.s. growth has been revised upwards.

“The us crude oil inventories have increased, which traditionally affects the price of oil” and the companies linked to this industry, recalled Quincy Krosby of Prudential (LON:PRU).

After the publication of a report by the american Agency for information on Energy (EIA) on stocks weekly, the values of the energy grouped in the S&P 500 declined 1.99%, the heaviest decline among the 11 sectors that make up the index expanded.

Technology stocks have again trembled, conducted by the fall of Amazon (NASDAQ:AMZN) (-4,38%) according to press reports on the willingness of Donald Trump to oversee the dominance of the internet giant. These rumours have, however, been contradicted on Wednesday by the White House.

The group has lost $ 31.4 billion in market capitalisation on Wednesday as a result of these rumors, and even up to 53.3 billion during the session, which is more than the market capitalization of General Motors (NYSE:GM).

More broadly, the fear of regulation increased in the technology sector after the outbreak of the scandal, Facebook (NASDAQ:FB) (+0,53%) on the improper use of private data, inspired always with the pessimism of the brokers.

“Nobody on Wall Street does not like the regulation and most of all no one knows in what proportions the control of these companies will be taxed,” said Sam Stovall of CFRA.

The markets have still been able to take advantage of the upside surprise in us growth for the fourth quarter of 2017 with a third estimate to 2.9% from 2.6% expected.

“It is a good and a bad news to the extent where it gives a +green light+ for future rate hikes,” said Ken Berman of Gorilla Trades.

The interest rate increases from the u.s. central bank (Fed) and increase the cost of the financing costs of companies.

Among the other values of the day, Tesla continued his descent to the underworld (-7,67% to 257,78 dollars) while the credit rating agency Moody’s decided to downgrade the note of the company, due to production problems encountered by the manufacturer of electric vehicles, and a risk of lack of liquidity.

On Tuesday, the action had already sold a total of 8.22%, after the initiation of an investigation by the NTSB, the regulator of transportation u.s., following a fatal accident involving a vehicle of the brand. The share has lost nearly 28% in a month.

Nike (NYSE:NKE) declined (-1,10% 65,44 dollars) despite the announcement on Tuesday by the national League of american football (NFL), a long-term extension of its partnership with Nike including sports equipment for the games of the 32 clubs in the competition.

The pharmacy chain Walgreens Boot Alliance has increased (+2.47% to 67,59$) after the announcement of better than expected results.

The company Lululemon Athletica specializes in clothing athlete jumped after its results (+9,21% 85,96 usd).