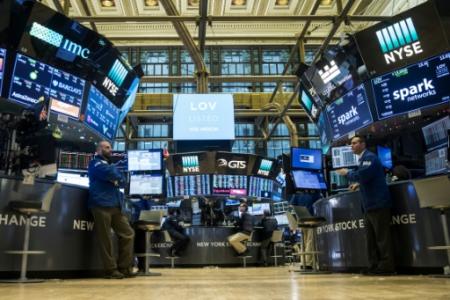 Wall Street has ended sharply higher on Monday, reassured by the confirmation of a dialogue between the United States and China regarding the u.s. trade deficit, coming to calm the fears of trade war.

The u.s. Treasury confirmed on Monday that Steven Mnuchin had called Liu He, the principal responsible for chinese economic promoted to vice-Prime minister in charge of economic and financial sectors of China.

They are committed to continue the dialogue to find a mutually acceptable solution” to reduce the u.s. trade deficit, said a spokesman.

On Sunday, the Wall Street Journal said that Beijing and Washington had engaged in negotiations behind the scenes to improve the access of american companies to the chinese market.

These conversations occur after Donald Trump announced on Thursday that the United States would impose new taxes on some $ 60 billion of chinese imports.

“It is now more than just rumors and it is positive for a market that has without doubt had exaggerated fears in the past week”, said Tom Cahill of Ventura Wealth Management.

Donald Trump is excited about Twitter (NYSE:TWTR) information according to which the Dow Jones posted its third highest win in the history in terms of points on a session, seeing it as a “great news”!.

The american president was, however, stayed silent when the same index had dropped more than 700 points last Thursday.

Facebook (NASDAQ:FB) has benefited from the popularity of Wall Street, ending in a very small increase (+0,42%) after having lost up to 6% in session when the regulator u.s. commerce Federal Trade Commission (FTC) indicated that it had opened an investigation into the practices of the group in terms of private data.

Since the outbreak of a controversy there’s a little more than a week on the undue use of data on the social network by the company Cambridge Analytica, the course has lost 13.5% and 72.6 billion dollars of market capitalization evaporated.

The set of eleven indices that make up the S&P 500 have finished higher, with the largest increase coming for the financial stocks and technology stocks, the latter taking 4,03%.

“The fundamentals of the companies techs are very good and are the companies the most powerful currently if we exclude social media,” explained Mr. Cahill.

Among other values, General Electric (NYSE:GE) was one of the rare values to decline (-1,38% 12.89 usd), with a Wall Street Journal article about his branch of GE Capital. The course has ended under the $ 13 for the first time since 2009.

Microsoft (NASDAQ:MSFT) has surged (+7,57% 93,78 dollars) after a note from Morgan Stanley (NYSE:MS) said that the market capitalization of the company could reach 1,000 billion dollars. Today it is $ 722 billion.

The company’s online data storage Dropbox (NASDAQ:DBX) has yet taken 6,92% to 30,45 dollars, after soaring 35% on Friday on the occasion of his first steps on the stock Exchange.

Lowe’s has taken to 6.60% 89,30$, while the distribution chain has announced the departure of CEO Robert A. Niblock after 25 years of career in the company. The group is searching for a successor.