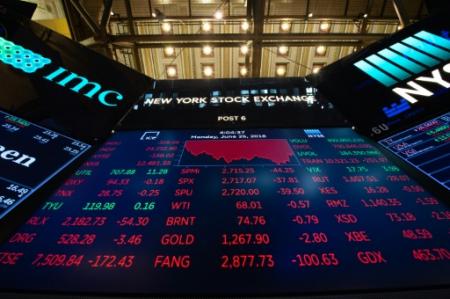 Wall Street ended lower on Wednesday, affected by a new attack of the american administration against China on the front commercial, reviving the specter of a trade war between the two countries.

According to the final results at the close, the index featured Dow Jones Industrial Average, has dropped 0.88% to 24.700,45 points.

The u.s. administration has again struck on Tuesday in the trade war against China by drawing up a supplementary list of chinese products imported in the amount of 200 billion dollars per year that they threaten to tax as early as September.

“The fear of the markets is that this trade war will continue and that it leads to economic disruption worldwide,” noted Ken Berman Gorilla Trade.

As Donald Trump might not stop there since the american president had indicated that he might be taxed more than $ 200 billion in additional imports.

In total, the tax could thus apply to more than $ 450 billion of chinese imports in the United States. They represented in their entirety 505 billion in 2017, and the balance of trade between the two countries was reflected last year with a budget deficit of $ 375 billion at the expense of Washington.

Without a resumption of negotiations between the two countries, “a new escalation of tensions seems inevitable”, have considered the economists of Oxford Economics.

Particularly sensitive to the fears of war business, the international group Boeing (NYSE:BA) and Caterpillar (NYSE:CAT) lost, respectively, 1.89% and 3.18 per cent.

Chinese companies listed in the United States have also suffered as a result, the group Alibaba (NYSE:BABA) abandoning of 2.65% and JD.com to 1.66%.

“It will be very interesting to observe the impact of these fears on the corporate results this week,” said Emily Roland, at the head of the financial research at John Hancock.

The quarterly results, with an optimistic outlook have sparked enthusiasm in the markets since the beginning of the week, start really Friday with the accounts of the great names of us bank.

The side indicators, the us producer price rose more than expected in June, drawn primarily by the services sector with significant margins in the retail sales of fuels, said on Wednesday the department of Labor.

Among the other values of the day, American Airlines has heavily dropped (-8,08% 35,96$) after a lowering of its forecast for growth in revenue per seat, and miles traveled (TRASM), because of weaknesses in the u.s. domestic market. Its competitor Delta (-1,50% 49,84 dollars) should it report its results on Thursday.

The Fox group (-3,98% 47,79 dollars) of the Murdoch family has backed her up on an offer from Comcast (NASDAQ:CMCSA) (+1.29% to 33,77 dollars) to buy the business for british television Sky, a new episode in the battle of the two sides of the Atlantic between the giants of an industry in upheaval.

Pharmaceutical giant Pfizer (NYSE:PFE) declined (-0,59% 37,21 dollars) after having confirmed on Tuesday the postponement of the price increase of some drugs, following a conversation with the CEO of the group with the us president, Donald Trump. The latter was outraged Monday on Twitter (NYSE:TWTR) of these increases.