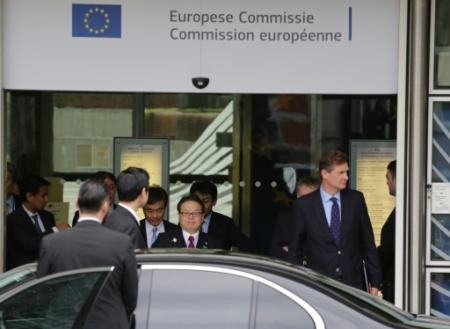 The japanese minister of Economy, Hiroshige Seko (c) leaves the headquarters of the european Commission, on 10 march 208 in Brussels (Photo Aris Oikonomou. AFP)

The european Union expects Saturday “clarifications” on the customs taxes imposed by Donald Trump on the steel and aluminum, and has warned Washington against the risk of a trade war if it is not exempt from these measures.

The u.s. Trade representative Robert Lighthizer arrived in the early afternoon in Brussels for a meeting with the european commissioner for Trade, Cecilia Malmström, and the japanese minister of Economy Hiroshige Seko.

The japanese delegation is, for its part, arrived shortly before 09: 00 (08: 00 GMT) at the headquarters of the Commission and had a first interview with Ms Malmström, has indicated to the AFP a source european.

None of the three participants made statements at his arrival, and the contacts with the media were limited to images. A press release of the European is, however, expected at the end of the meeting.

The Europeans and the Japanese are going to put the pressure on their interlocutor, but they do not expect a decision on Saturday. They demand to be exempt from taxes of 25% steel and 10% aluminum, as decided Thursday by Donald Trump and reject the condition that an agreement on the security imposed on Australia by the us president.

The head of the French State, Emmanuel Macron warned Friday evening that Donald Trump against the consequences of his decision.

“Such measures in allied countries, which comply with the rules of the world trade, would not be effective to fight (against) the unfair labor practices,”-he said. “Europe will respond in a way that is clear and proportionate against any practice that is unfounded and contrary to the rules of world trade”, he warned.

“We need clarification, ( … ) The manner in which the exemption process will work is not very clear”, explained Friday the vice-president of al european Commission Jyrki Katainen. But “I hope nobody expects us to make concessions on trade issues”, he warned. “The speech of Donald Trump is disguised protectionism”, he denounced.

“It is not a commercial negotiation. What we are talking about, it is a unilateral action against the international rules. We want to settle this before it becomes a real problem,”-he said.

The day of Saturday “will be long”, for its part, predicts Ms Malmström. “We hope that we will be able to obtain confirmation that the EU is exempt”.

In the opposite case, the counter-measures are ready. The most immediate, applicable in three months, would be taxed heavily, by way of retaliation, some american products are emblematic, such as jeans, motorcycles of large cylinder capacity, or the peanut butter, which Brussels has drawn up a list.

The EU also intends to implement measures so-called “safeguard” to protect its industry from foreign imports of steel and aluminum.

It provides, finally, to file, if appropriate, a complaint before the world trade Organization (WTO), arguing that the us measures, under the guise of protecting national security, serve only to the advantage of its companies.

“We’re friends. We can not be a threat to the national security of the United States,” said Ms. Malmström.

Allies and rivals of the United States have denounced since Thursday to turn sharply protectionist american and an attack on free trade.

Germany, one of the largest exporting countries in the world, directly criticized by Donald Trump, has been particularly scathing, decrying “protectionism,” american and an “affront” to its allies.

To the chinese ministry of Commerce, it is an “abuse”, and the head of diplomacy, Wang Yi, has promised an “appropriate response” in the event of a trade war with Washington. China, by far the world’s largest steel producer, is regularly accused of being the origin of the overcapacity in the sector, because of its massive subsidies.

In the United States, the announcement of the tariffs has sparked a revolt within the camp, republican of Mr. Trump.