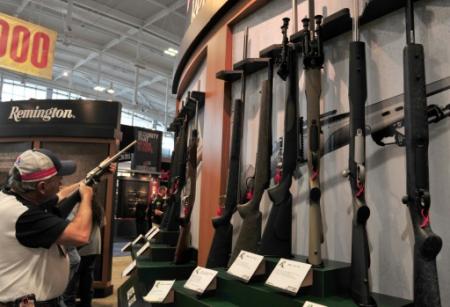 The bankruptcy of Remington reflects the disaffection of the Americans for weapons, while more than 1.5 million protesters called on Saturday for a strengthening of the legislation in the face of the killings in the schools.

But, for the arms merchants, the difficulties began, paradoxically, by November 2016 at the time of the election of the republican Donald Trump at the White House. His victory, while his rival, democrat Hillary Clinton was the favourite, caused a sharp deceleration in sales of weapons, fears of a tightening of legislation fade.

Close to the National Rifle Association (NRA), the powerful lobby of weapons to fire, Donald Trump seemed to be much less likely to come back on the second amendment of the Constitution, which guarantees every American the right to own a weapon.

The sales have thus slowed down, leading to a drop in sales of gun manufacturers, and, today, the bankruptcy of one of the most famous among them, Remington.

The succession of killings, especially in schools, such as in a high school, Parkland (Florida) on 14 February, which left 17 people dead, has also prompted several major retailers to make restrictions to arms sales.

American arms manufacturers are confronted with “lower levels of demand for firearms,” was recognized at the beginning of march James Debney, president and CEO of the American Outdoor Brands, which markets the brand, Smith&Wesson, adding that this setback could last for a “twelve to eighteen months”.

The group Remington, whose headquarters is in North Carolina (south-east), was created in 1816 and, in addition to the weapons, he sells ammunition and barrels. It employs a total of 2,700 people on seven production sites in the United States and exports its production in 52 countries.

According to the documents published in the framework of the bankruptcy (known as Chapter 11 in the United States), Remington is facing “a significant decline in its sales” since a year with a request “that do not materialize”, but it has increased its production by 2016.

– The reluctance of the finance –

Remington had expressed his intention to file for bankruptcy on February 12, two days before the killing of Parkland, following an agreement with its creditors in order to continue to operate under judicial administration.

But, according to Ari Lefkovits of the investment bank Lazard, the group has met great difficulties to find enough financing and be able to continue its activities.

“Lazard has approached thirty potential investors to finance the” Remington, he pointed out, “but the vast majority of those we contacted indicated that they were reluctant to fund a weapons manufacturer”.

Remington turned to its creditors, usual among which JPMorgan Chase (NYSE:JPM), Franklin Advisers and Bank of America (NYSE:BAC), he added.

The restructuring of the group, which has already received the backing of major creditors, should be used to clear $ 775 million of debt in exchange for a greater control of the company by those who support it financially.

The fact that Remington does not happen to appeal to the financial community is not a surprise.

Last week, one of the nation’s largest banks, Citigroup (NYSE:C), announced that it will prohibit its customers from selling weapons to fire at least 21 years of age and to individuals whose backgrounds have not been audited, in the framework of a set of measures of “common sense” for gun control in the United States.

The largest asset manager in the world, Blackrock, for its part, has indicated in early march that it was studying the launch of new funds, including a “portfolio index” excluding manufacturers of firearms and their distributors.