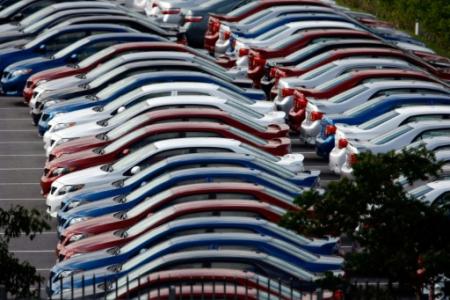 The United States will face retaliation from their trading partners, which could affect up to 294 billion dollars of american products (Photo JOE RAEDLE. GETTY IMAGES NORTH AMERICA)

Accused by Donald Trump to be as damaging commercially to the United States that China, the EU warned Monday Washington against the disastrous consequences of possible u.s. taxes on imports of foreign cars.

In a letter sent Friday to u.s. authorities, of which AFP obtained a copy, the european Commission warned the USA that if they carried out their threats to impose customs duties on automobiles of foreign, the u.s. economy “would be the first affected.”

And warn Donald Trump as the trading partners of the United States, EU included, would not remain arms folded, but on the contrary would impose heavy retaliation that would be detrimental to the automotive products american.

This letter occurs in a context of trade relations increasingly strained between the USA and the EU after the decision of Donald Trump to impose on the 1st of June, fee of 25% steel and 10% aluminum to the products exported by most countries in the world, including some of their allies, in the United States.

The EU had replicated some twenty days later, by implementing the customs duties additional imposed in Europe on dozens of american products.

In his letter to the us authorities, the european Commission, which represents the 28 countries of the EU, believes that The United States will face retaliation from their trading partners, which could affect up to 294 billion dollars of american products (19% of u.s. exports in 2017) if Donald Trump put his threat to execution of taxation on imports of foreign cars.

She also emphasized that the european car manufacturers make an important contribution to the american economy and that they are “well-established”.

“In 2017, the EU companies, based in the USA, have produced almost 2.9 million cars, which represents 26 % of the total production of the United States,” she adds.

“These businesses support 120.000 direct and indirect jobs in the us plants across the country,” she continues, referring to sites in South Carolina, Alabama, Mississippi and Tennessee – States in the southern United States known for their support of Donald Trump.

Time and again, the american president has raised the possibility of imposing taxes, which apply to Germany in particular, to protect the american auto industry .

The real estate mogul regularly see a lot of Mercedes in the streets of New York, but not enough american cars in european streets.

But the american manufacturer General Motors (NYSE:GM) has also warned against an increase in tariffs that “could reduce the size of GM,” as well as “jobs”.

Friday, after a summit in Brussels, German chancellor Angela Merkel, whose country is strongly involved in exporting was the most to be feared among the member States of the EU of escalating tensions with the United States, ensured that Europeans “were going to try to do everything to avoid a trade war”.

The president of the european Commission, Jean-Claude Juncker, must make it by the end of the month of July in Washington, in order “to present the point of view of the Europeans” to Mr. Trump.

On Sunday, Mr. Trump seemed to not hear it of this ear: on Fox News, he has launched: “The european Union is probably just as bad as China except that it is smaller”.

“It is terrible what they have done to us,” said the billionaire. “We all love a certain way, the european Union, but these countries “treat us very badly. They treat us very unfairly”.