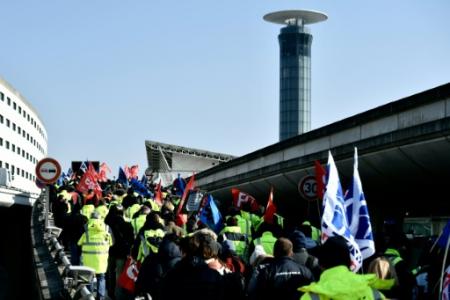 Protests of the employees of Air France in front of the headquarters of the airline near the airport Charles-de – Gaulle airport in Roissy near Paris, on February 22, 2018 (Photo by Philippe LOPEZ. AFP)

Pilots, hostesses, stewards and staff on the ground at Air France demanded on Thursday their “share of the cake” in demonstrating for a general increase of 6%, during a strike quasi-unitary, which is forcing the management to cancel half of long-haul flights.

In front of the company headquarters in Roissy, they were about 750 to gather at mid-day, according to the prefecture, in yellow fluorescent jackets or in uniform, in the quiet and under a cloud of flags union, has found an AFP journalist.

They have responded to the appeal launched by 11 pilot unions (SNPL, Spaf, Alter), hostesses and stewards (SNPNC, Unsa-PNC, Unac, CFTC, SNGAF) and personal on the ground (CGT, FO and SUD). We are all calling for a general salary increase of 6%, when the management proposes 1%.

The strike cross-categorical, unprecedented, “since 1993,” according to FO, has led the company to cancel many flights.

Air France has planned to ensure that the total of “75% of his program.” In detail, 50% of long-haul flights departing from Paris are held, 75% of medium-haul and to Paris Charles-de-Gaulle and 85% of short-haul. “Disruptions and delays” are also possible.

Management believes the rate of strikers to “28%”. According to an internal source, it is 33% for drivers, 37% for the cabin crew (hostesses and stewards) and 26% in the soil.

“We want the 6%!”, “make the money”, shouted the protesters at charles de gaulle airport, while others were holding placards: “No to the wages low-cost”, “Return on the investment of employees” or “We want our share of the cake”, a reference to the DRH Air France, Gilles Gateau.

“For years, the management has blocked our salaries because of the crisis”, explained to AFP Stéphane Pérez, delegate FO the ground. “Today they have made 1.5 billion in profits and we offer just a 1% increase in general”.

For 2018, the management has put on the table a draft agreement providing for a general increase, the first since 2011 – to 1% in two stages, a revaluation of mileage allowances, and an envelope of individual increases (bonuses, promotions, seniority…) of 1.4% for the only agents on the ground.

Accepted by two minority unions (CFE-CGC and CFDT), the text has been invalidated by a majority of unions, and then implemented unilaterally by management. The inter-union calls for a 6% increase in salary grids.

“Since 2012, we are suffering a wage freeze, it requires just the ability to maintain our standard of living,” said Vincent Rooms (CGT).

“The employees have need of this return, this recognition” after the efforts during the earlier plans of restructuring (reduction of headcount, loss of vacation days, etc), said on Wednesday Philippe Evain, president of the SNPL Air France.

But for management, a general increase of 6%, $ 240 million, would be “unreasonable and unrealistic”.

“Fully aware of the efforts made” by the staff, he has advocated a “realistic balance” between “a fair compensation of efforts” and the “investment” needed.

Mr. Terner has to be recalled that the company had “for the first time since 2011 unlocked grids” wage and “most importantly negotiated a profit-sharing agreement for” up to “130 million”. In total, 44.200 employees of Air France “will receive this year between 3 and 4.5% more than last year, he said.

The intersyndicale, which will meet on Friday, holds already the threat of a movement more hard “if the direction is heading”. The SNPL, majority in the cockpits of Air France (65% of the vote), consults with all the pilots until march 14, to “have recourse, at need, to one or more work stoppages” may exceed six days.