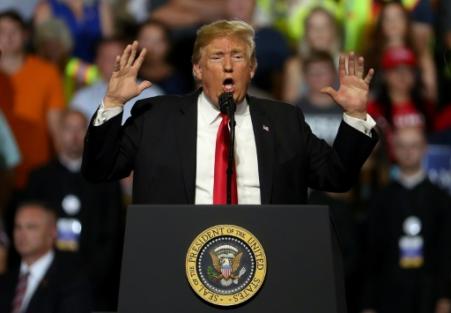 The United States has fired a new salvo in the trade war with China by drawing up a supplementary list of chinese products imported in the amount of 200 billion dollars per year that they threaten to tax as early as September.

“For more than a year, the administration Trump has patiently asked China to end its unfair practices, to open its markets and compete based on market forces”, said on Tuesday the us Trade representative to u.s. (USTR) Robert Lighthizer in a statement.

“Unfortunately, China has not changed behavior (…) and it threatens the future of the american economy. Rather than responding to our legitimate concerns, China has begun to take retaliatory measures against american products. Such actions are unjustifiable,” he accused.

Because of the legal process and consultation, these charges will not enter into force before September if the United States chooses to go to the end of their journey, said Tuesday the press responsible for the administration Trump.

These new measures are not a surprise because the u.s. president had warned that he would do so if Beijing opted for the climbing after the implementation last week of the first protectionist measures in the u.s. on $ 34 billion of chinese products.

The initiative, announced Tuesday, which includes the creation of the customs tariffs of 10% on the products referred to, sets in motion the process that will lead to their application if the two world economic powers do not find here a common ground.

China has not been slow to respond Wednesday, warning that it would be forced to take reprisals in the event of a new american tariff.

In a statement, the chinese ministry of Commerce has deemed it “totally unacceptable” the new threats of Washington and denounced the “irrational behavior” of the United States, as well as “the hégémonisme commercial”.

A little earlier, the vice-minister of Commerce Li Chenggang, had accused the United States of wanting to “destroy” the trade between the two countries.

Beijing had accused Washington last week, after the first lined us measures, have triggered “the biggest trade war in economic history”.

They represented in their entirety 505 billion in 2017, and the balance of trade between the two countries was reflected last year with a budget deficit of $ 375 billion at the expense of the United States.

There are added taxes of 10 percent on imports of aluminum and 25% on those of steel, which involve China and other countries.

Washington blames for last summer’s Beijing of “technology transfers forced” by requiring u.s. businesses that want to sell in China to create joint ventures in which they are forced to find partners in china, the latter taking advantage of american technology. The administration Trump accuses China directly from “theft” and asked him to do more to open its market by putting an end to customs barriers and legal.

Specifically, the administration will now hold hearings and investigations regarding the impact of these tariffs to additional that will, among other things, products such as fish, tires, leather goods, cheese, wood, paper, and chemicals. The process will take up to two months and include hearings which will allow the relevant sectors to put forward their arguments for or against the imposition of these new tariffs.

The dispute over intellectual property with China, is that one of the fronts opened by Donald Trump in his offensive protectionist.

In addition to the taxes on steel and aluminum, which apply to almost all trading partners of the United States, he plans to tackle the automotive sector aimed, in particular, the German imports.