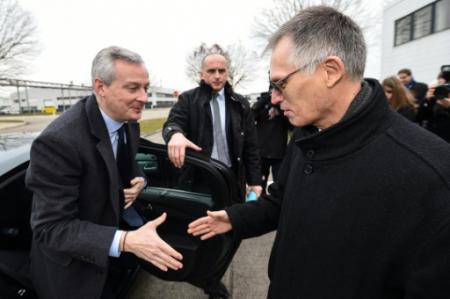 The industry minister Bruno Le Maire, with the boss of PSA, Carlos Tavares, in Mulhouse, france on 23 February 2018 (Photo by SEBASTIEN BOZON. AFP)

The government convene in early April the leaders of the automotive industry to adapt to the expected decline in diesel-powered models, announced the Economy minister Bruno Le Maire Friday in Mulhouse (Haut-Rhin).

“I will be raising at the beginning of April the automotive industry to look together at the challenges ahead. I think in particular of diesel,” said Bruno Le Maire during his visit to the PSA plant (PA:PEUP), Mulhouse, france.

The meeting’s objective will be to reflect on the way of”support contractors” in the expected decline in sales of diesel cars, and “how to accompany a big company such as PSA in this transformation of the engine to the gasoline, the hybrid, the electric, the expense of which has been its strength,” continued the minister of the Economy and Finance, in a speech to the leaders of PSA and local elected officials who accompanied him in his visit.

This meeting will be the first of the strategic committee of the automotive sector such as redefined by the current executive, said The Mayor, who said he was there to wish the presence of the boss of PSA, Carlos Tavares and Renault (PA:RENA), Carlos Ghosn.

PSA “will be ready next year” to apply “technologies, currently in the final phase” of development, under its “engagement in the energy transition”, stressed Carlos Tavares with journalists during the visit to Mulhouse. For PSA, “there is no debate on the necessity of this commitment, he said.

According to The Mayor, the engine is part of the “environmental challenge” to which the French automotive industry must meet, “at a reasonable pace compared to the investment capacity of the factories.” The other two challenges relate to “the training accompanying the robotization” and the ability to produce “breakthrough innovations, for example on the storage of renewable energy,” he completed.