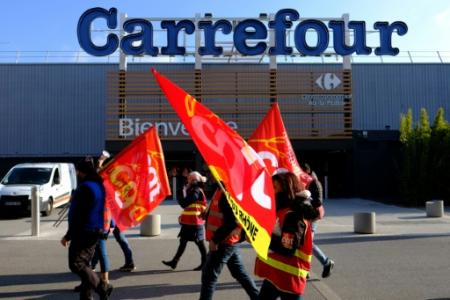 Employees of Carrefour protest in front of their store in Aix-en-Provence, france, February 8, 2018 (Photo by BORIS HORVAT. AFP)

Carrefour (PA:CARR) wants to go fast on the backup plan of employment (PSE) for approximately 2,300 employees of its subsidiary convenience stores, with a beginning of trading on 20 February, for a plan before the summer, it was learnt on Monday from union sources.

In total, 2.262 employees are concerned, of which 2.072 employees in 273 stores, ex-Slide is going to be sold or closed, as the group CEO, Alexandre Bompard has been announced on 23 January, indicated to the AFP Frédéric Roux (CGT) at the end of a meeting of the CEC of the Crossroads Nearby. The others are working in support functions.

The negotiations on the PSE will commence on the 20 February, on the basis of the first management proposals presented Monday, based on a framework agreement group “minimum”, said Cyril Boulay (FO). They should be complete by mid-march, according to Mr Roux.

The two union representatives had expressed the willingness of management to”go fast”.

The schedule provides that the central works council (CCE) give its opinion at the beginning of June for a PSE launched in the wake.

The SGC will attend the talks but “will not negotiate any PSE,” said Mr. Roux. “We’re going to go to tell the employees, per store, that it is necessary to mobilize now to their future,” he added.

In announcing his plan, Alexandre Bompard was told to expect reclassifications to the half of the employees concerned. A hypothesis which does not believe in the two unions.

FO, who had mobilized a hundred people on the occasion of the CEC, organizes a “operation caravan”, with “a point of engagement every day”, to weigh in on the negotiations. The union wants to “support measures, practices and equality of treatment” between the employees concerned by the PES, and the 2.400 employees of the offices of the group are covered by a voluntary redundancy plan.

The CFE-CGC also calls for “compensation equal for all,” said president Thierry Faraut.

As for the CFDT, it asks for a “year in white” for dividends in 2018 so that they are “dedicated to the social support and the reclassification of the employees affected by the various restructuring” in the group.