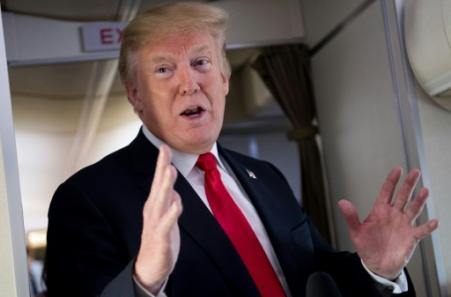 The american president Donald Trump made a statement in the aircraft presidential Air Force One, June 29, 2018 (Photo SAUL LOEB. AFP)

The us president, Donald Trump has denied Friday that it intended to withdraw the United States from the world Trade Organization (WTO), which it has in the past qualified as”unfair”.

“I’m not in withdrawal”, he said since the presidential plane Air Force One, after having been questioned on press information according to which it was considering the possibility of slamming the door of the organization.

Earlier, his secretary of the Treasury Steve Mnuchin had already denied the same information to the press.

“There is no new information. Therefore, any person taking up the history of Axios was wrong,” he said on Fox Business Network.

“I will not use our word favorite in this matter, that is to say, +Fake news+ (misleading information) but this is an exaggeration. The president has been clear with us and with others on the WTO. He thinks that there are aspects that are not right,” added the Finance minister.

The information site policy Axios, quoting “people involved in the discussions with the american president”, claimed that Donald Trump had often told his advisers that he wanted the United States should leave the WTO.

Such a departure could have serious consequences for international trade.

According to a person quoted anonymously by Axios, the president would have said on numerous occasions: “I don’t know why we are a part of it. The WTO has been designed by the rest of the world to defraud the United States”.

In the past, Donald Trump has regularly publicly denounced the functioning of the organization.

“China, which is a major economic power, is considered a developing country within the world trade Organization. They therefore have enormous advantages, particularly compared to the United States,” he as well tweeted on the 6th of April.

“The WTO is unfair to the United States,” was added to the american president, in the customary criticisms of the multilateral organizations, from the UN to NATO.