X-Trades Brokers : financial results for the 1st half of 2017

X-Trades Brokers : financial results for the 1st half of 2017

The net result has been shaped by the following factors :

a) 10% Increase in operating income due to a greater profitability by batch ;

(b) Improvement of profitability through a decrease of 22.7 million PLN in operating costs ;

2) The factors not related to base operations, namely :

a) The creation of a decrease in impairment of intangible assets separate in the form of a license brokerage on the Turkish market in the amount of 5.6 million PLN.

(b) The appearance of exchange rate differences negative (financial costs) in the amount of 12.2 million PLN (2.9 million PLN in 2016) due to the strengthening of the Polish zloty compared to other currencies.

Operating revenue rose 10% to $ 125.2 million PLN in the first half of 2017, compared with 113.8 million PLN compared to the previous year. The structural part, the revenues have been shaped by an increase in the profitability per batch with a transaction volume comparable.

According to the management board, in the next few months, a significant share of the branches of XTB is expected to maintain the increasing number of accounts recorded in 2017. Germany, France and Latin America have the largest growth potential for the company. The increase of the accounts is not only the result of a strategy of sales and marketing, but also in the development of products and technology. 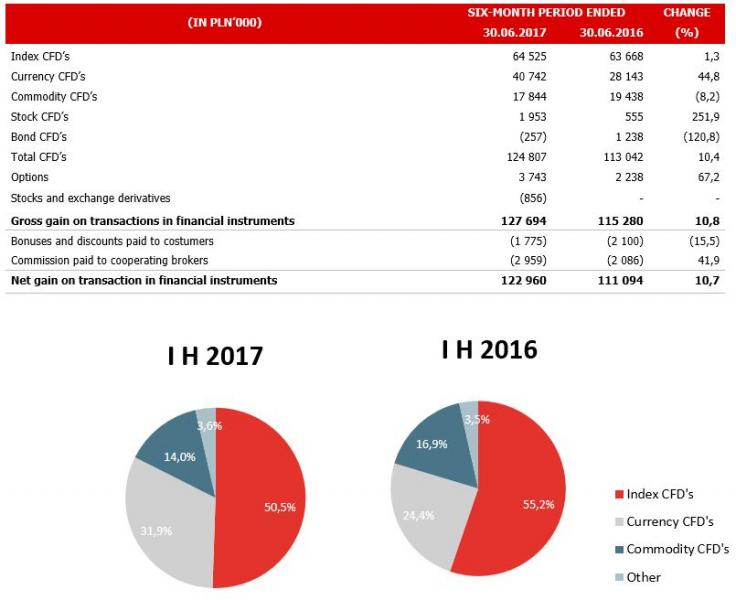 Geographically, the income of X-Trades Brokers have been diversified. The countries in which the group holds more than 15 % of its revenues are Spain 23 % and Poland with 19.4 %. The share of other countries in the geographical structure of revenues does not exceed 15 %. Latin America is also gaining importance in the world.

In the first half of 2017, XTB has been able to improve significantly the cost-effectiveness ratio compared to the same period of the previous year, while maintaining a growth in the number of new accounts and number of active accounts. The operating expenses amounted to 72.5 million PLN, a decrease of 23.8 % y / a. This reduction is attributed to the decrease of $ 18.6 million PLN in marketing costs, primarily due to the decrease in spending in advertising campaigns.

The board of directors expects that the operating costs in the second half to be at a level comparable to that of the first half. The final amount of operating expenses will depend on the components of the variable remuneration paid to employees and the amount of marketing expenses.

The group XTB operates on the international markets, it therefore holds money in different currencies. It is a result of the exchange rate, positive and negative. The group recorded foreign exchange differences negative (financial expense) of $ 12.2 million PLN (2.9 million PLN in 2016) because of the appreciation of the zloty.

The regulation of the industry at national and international level could change the face of long-term. On the one hand, the european securities and markets authority(ESMA) announced on June 29, a possible intervention on the CFD, binary options and other financial products highly speculative, which would be conducted in the context of MIFIR. In a press release, ESMA has announced a limitation of the level of leverage,the prohibition of the bonus offers, the obligation to provide protection against the negative balance and restrictions on advertising and promotion. According to ESMA, these new rules will come into force at the earliest on January 3, 2018. Poland has announced in July a draft amendment of some laws to show that the government is considering to reduce the maximum leverage to 1:25 for investors FX / CFD.

The proposed restrictions on the market in FX / CFD are designed to protect retail investors mainly against market abuses that have undermined confidence in the entire securities industry. In the opinion of XTB, in regard to the Polish market in which the group has 19.4% of its revenues, it will be essential to ensure operating conditions uniform to all players in the market so that legislative actions do not adversely affect investors in the Polish government in supporting the development of the “gray market” of foreign entities, where the particular investor will seek products optimal for its investment portfolio. The introduction of restrictions unilateral proposed for the industry FX / CFD while neglecting the actions of foreign entities to harm the Polish customer and the market as a whole. It should be noted that we are talking about currently a draft, the proposed amendments may not enter into force.

The market environment described above is for XTB with an opportunity to consolidate the industry at a national and international level. The management plans of the company for future periods assume an accelerated development of the group, in particular by expanding the customer base by penetrating more markets to existing and accelerating geographic expansion on the Latin American markets.