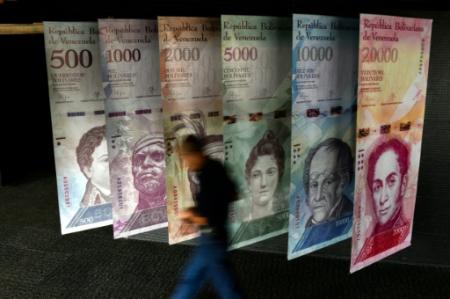 Of bolivars reproduced on posters in front of the central Bank in Caracas, venezuela, on January 31, 2018. Currency venezuelan has lost 86.6% of its value against the euro in five months (Photo by FEDERICO PARRA. AFP)

Wilmer began by manufacturing small boats with bolivar the venezuelans found in the street. Now, it makes handbags made of 800 tickets plaited the total value of which would buy a half kilo of rice.

Has 25 years, this father of three children and the fourth is on the way decided to dedicate himself to this art form, with the raw material, with a currency that nobody wants, as it loses value in our eyes. Last example in date, a dive of 86.6% in five months against the euro, which was revealed on Monday by an auction of foreign currency held by the central Bank.

The european currency was trading Monday 30.987,5 bolivars, compared to 4.146,13 units in August, the last known rate in Venezuela, a country where the official indicators are sorely lacking.

“People throw them (the tickets of low value) because they do not allow us to buy anything, no one accepts them”, explains to the AFP Wilmer Rojas at the exit of a subway station in Caracas, where he sells coffee and cigarettes, and kills the time by braiding of the notes. He hopes to sell one day his creations to increase its revenues.

The new bank notes introduced a year ago, to a value ranging from 1.000 to 100,000 bolivars, have been caught up by rampant inflation, estimated at 2,600 percent in 2017, according to the Parliament controlled by the opposition, and to 13.000% this year, estimates the international monetary Fund (IMF).

On the black market, considered as the reference rate, the dollar was trading Tuesday at 233.531 bolivars, according to the website dolartoday.com.

“There, there are 50 +bolos+ (50.000 bolivares), which allow you to buy a packet of cigarettes, at the most,” said Wilmer about the notes used to make crowns, such as those of beauty queens.

“These crafts, you can make them from newspaper or magazines, but with tickets it is more convenient because they no longer have value and they all have the same size, you don’t lose time to cut them”, explains Wilmer.

The lack of liquidity, the real headache for the Venezuelans, also affects her own small business, where the passers-by buy coffee and cigarettes with cash. “People pass me in greeting and say to me, +I have nothing on me+”.

In the center of Caracas, of other artisans selling bags similar to those of Wilmer to more than 150.000 or 300.000 bolivars.

The fact that the venezuelan currency is used to “play” and not as a means of payment says a lot about the loss of its value, says the economist Tamara Herrera.

At the other end of the country, in the State of Tachira (west), frontier with Colombia, José Leon, a designer from venezuela, 26 years, beginning in march 2016, to a “protest” in its own way by drawing on the notes he published on Instagram with the hashtags #venezueladevaluada (#venezueladévalué).

Mickey and Minnie, Krusty (the clown of the Simpsons), Mafalda, Donald Trump or Nicolas Maduro: the sources of inspiration of the one who calls himself “@Leon_Mix” on the social network are many.

He sells these unique pieces up to $ 20 in a country where the minimum wage is 798.510 bolivars, equivalent to 3.5 dollars on the black market.

“With the correcting fluid (tipp-ex) and felt pens, I can revalue my currency of almost 5,000 percent,” he said to AFP in his studio in San Cristobal, a city close to Cucuta, side colombian.

To meet the orders of its customers, it crosses the border to exchange dollars against bolivar. “Even if it sounds incredible, I’m going to Colombia to find venezuelan money”, he says, while the socialist president Maduro makes it responsible for the “mafias” of the devaluation of the bolivar and the shortage of cash.