Wednesday’s trading started very properly in a negative territory, and we got a broad conclusion on the minus among European storbolagsindex. The OMXS30 closed finally at -0.36 percent to 1641.71 on Wednesday. The turnover on the stockholm stock exchange amounted even to 15.5 billion. After overnight trading in Asia, we see a somewhat cautious introduction in front of us, when the stockholm stock exchange opens in a few hours…

Morgonrapporten now take residence on Friday, but is back as normal again on Monday. We take this opportunity to wish you all a very happy midsummer!

In addition to a brief moment on Wednesday, we experienced a negative trade in the OMXS30 index. Around Europe, we got a similar conclusion, while we got a slightly more mixed development in the united states.

After overnight trading in Asia, there exists a somewhat more cautious attitude. We turn our eyes to, for example, u.s. S&P 500 semester, traded this is also around zero. 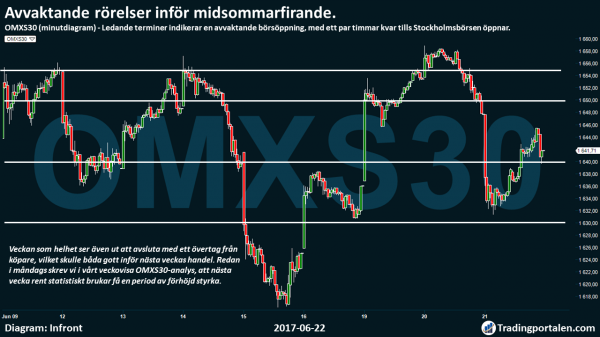 What really stands out this torsdagsmorgon, is that Brent oil after Wednesday’s statistics on u.s. stocks of crude oil, which failed to satisfy investors, meant a listing under 45 dollars. Brent oil has now a week ago has fallen over -5 per cent.

At the same time, we have not as we highlighted earlier in the week experienced no clear correlation to oil, which means that we do not see any major abreaction around among the world’s storbolagsindex.

Tomorrow, Friday, we take a small break due to the midsummer festivities, which at the same time means that we expect a slightly more relaxed trading this Thursday.

We maintain a position in the trading within the range of 1630-1650, and does not expect that we will receive any significant outbreak, with a clear volume.

Sure, it can be a minor outbreak, which very well could be a challenge of the short term resistance at 1650 points. Already on Wednesday we managed to have a brief visit of 1645.50 points. Which meant a brief listing of plus, half an hour before closing.

The week as a whole also looks out to the finish with an advantage from the buyer, which should both bode well for next week’s trading. Already on Monday we wrote in our weekly OMXS30 analysis, next week will statistically tend to get a period of elevated strength.

This means that even if we do not see any major moves ahead of today’s trading, it may mean that with the back of stronger trade historically, the next week, we can finally get to erupt and challenge of 1670 points… 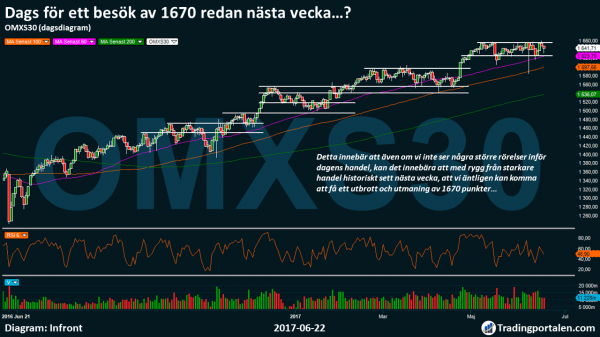 Interestingly enough, we have still not received any statement from OPEC, which should step out of the shadow now when we just a week ago got to experience a decline of over -5% in the oil, where Brent noted during the 45 dollars, and WTI is around 42.50 dollars.

Technical resistance levels await again at 1650, 1658, followed by 1670 points. Support levels await already at 1640 points, followed by the particular, 1630, and 1600 points. Possibly we can get that we have a minor support around 1625 points, then we experienced difficulties around this price level at the end of the previous week.

Started Wednesday with a decline of over 2 percent.

Autoliv, the journey continues further to the south on Wednesday, and challenging at the same time, the long-term partner in the form of the 200 day moving average just below the 940 sek.

The company’s share has now since its peak earlier in June, clearly deviated from the 1 000 kronor, and the fallen 9 out of 11 trading days.

On Thursday took the Guggenheim Securities up coverage of the company with a neutral recommendation and a price target of 102 dollars (896 dollars) on the basis of a one-year term.

At the MA 200 is also a heavy support level that is now being challenged, which holds a significant volume of last year… 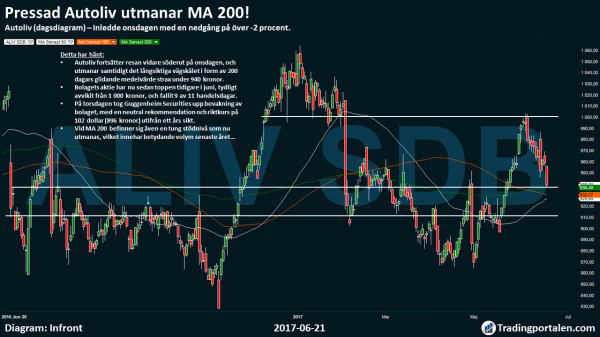 SSAB will find the land at a heavy intensity.

After Tuesday’s sharp decline, there are positive noises on Wednesday.

Steelmaker SSAB manages to turn the vibes on Wednesday, after the company sharply fell during the capital markets day on Tuesday.

The turning point occurred at the same time, at the sole technical support level at just over 36 crowns, which since the end of 2016 experienced the high volume on this price level.

Maybe it was a temporary decline, for the new tag up to a new high for the year…

Pareto wrote early Wednesday in a comment to Tuesday’s capital markets day, that the SSAB abstained from the more short-term goals may have contributed to the negative development of approximately -3.3 percent.

”Vinstmomentum looks relatively good for the second quarter, but we see much uncertainty for the full year, with falling chinese prices, and believe that chinese production levels continued to be a concern,” wrote Pareto, which repeated the recommendation keep and a target price of sek 38. 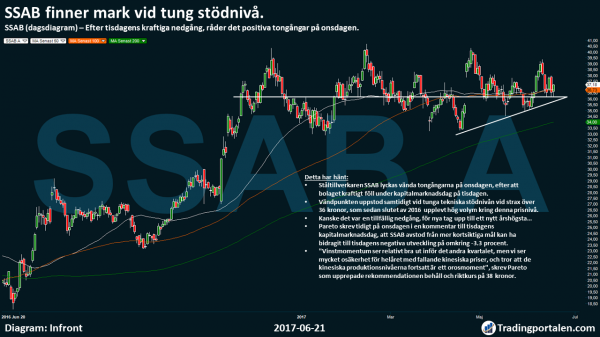 Indextunga the banking sector as a wet blanket on Wednesday…

Negative noises when the technical key levels are being challenged seriously!

Nordea is now trading not only during heavy intensity, but challenges including short-term 50-day moving average on Wednesday…

SEB has not managed to get a negative outburst, but to challenge seriously the heavy support level at sek 104.

Handelsbanken climbed early during the support level on Wednesday, but are balanced now around this technical key level at 121 sek.

Swedbank stands out a little extra, by making a clear step below the MA 50 and the previous underlying trend line… 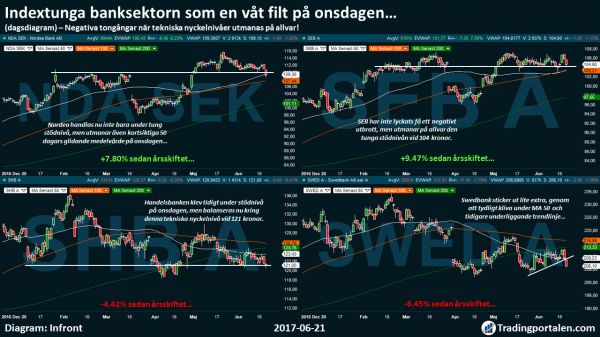 The stockholm stock exchange parked on the negative mark during the Wednesday even though some relief was evident in the afternoon. The major european trading venues was also a bit below zero.

Storbolagsindexet OMXS30 index ended 0.4 per cent down to the level of 1.642. Turnover reached € 15.5 billion on the stockholm stock exchange.

”We look back a month, so has the OMXS30 traded sideways within a consolidation. A much-needed andhämtningspaus after a uppgångssvit in eleven months. A closing above 1.657 would indicate further rise. Later in the week, we get the preliminary PMI data will give us a little more guidance,” commented Erik Hansén, market analyst at IG, the News agency Directly.

Banks weighed on the Swedish side while the mining companies jumps higher. Nordea, SEB and Swedbank were all just over 1 percent down. Handelsbanken did better with a slower decline.

SSAB, Boliden and Lundin Mining bounced all the back. Boliden took in the most and rose 2.1 per cent.

A part verkstadspapper step also such as Atlas Copco and SKF.

Klädbolaget RNB reported an operating profit but a slightly weaker gross margin. The company stuck to their divination, if the marked increase in income. RNB was 4 per cent higher.

Skidortsoperatören Skistar reported an improved result and the booking situation. The share took the lift up and stepped off at 3 per cent up.

Ericsson has hired banks to evaluate the sale of its media activities. Ericsson advanced just over 1 per cent.

ABB is reported to be in talks with the indian L&T, Larsen & Toubro, on a buyout of L&T’s electrical division. The stock rose marginally.

The hotel chain Scandic purchased the Finnish Restels 43 hotels for around € 115 million. The stock was up nearly 1 percent.

The business community recommended the purchase of spelaktien Mr. Green, who, however, declined marginally and sales for medicinteknikägaren Medcap who defied the council and rose 1 per cent.

Company Sedana Medical accounted for a successful debut on First North and ended up just below $ 24, up from the strike price 19:50 sek.

Also, the real estate company Trianon got approved and ended up at 51:50, over the exercise price of 48 dollars.

Bonesupport was also over the strike price and ended at sek 32, to compare with the signed 29 sek.

The county administrative board of Norrbotten has given Copperstone Resources work for the environmental permits for the Eva-existence. It gave a rush on the 15 per cent.

PLUMBING company Instalco dropped slightly despite the fact that Carnegie initiated coverage with a buy.