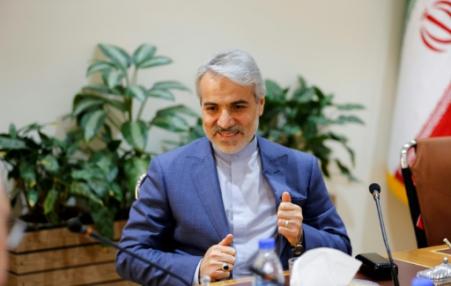 The vice-president of iran in charge of planning and budget, Mohammad Bagher Nobakht, during an interview with AFP, in Tehran on February 15, 2018 (Photo ATTA KENARE. AFP)

The central bank of Iran on Thursday announced measures designed to stem the fall of the iranian rial in the foreign exchange market.

Iranian banks are allowed to open for a period of two weeks of term deposit accounts of one year, in rials, using an interest rate of 20%, against 15% previously, indicates the bank in a press release.

This measure is designed to encourage Iranians to keep their rials rather than buy dollars or other foreign currencies.

The rial has lost about 25% of its value against the dollar of the United States in six months. For several days, the decline of the national currency has been accentuated by a strong increase in the demand for dollars by Iranians worried about their purchasing power continue to decline in the wake of the fall of the rial.

The central bank also announced the sale of gold coins at prices believed to be attractive to allow diverting a portion of the demand for dollars to the yellow metal, as a safe haven by excellence.

According to the government daily Iran, the authorities have also closed the bank accounts of 775 “disrupting the foreign exchange market” that had of the movements of capital of a total of 200,000 billion rials (a little more than four billion dollars).

After the arrests, and the measures announced by the central Bank, the rial has recovered slightly on Thursday against the dollar and was trading around 47.200 rials for a dollar by the end of the day against 48.400 rials the day before.

In 2010, a dollar was worth 10.000 rials, but the tightening of sanctions american and european against the iranian nuclear program from the end of 2011 has been tumbling down the value of the iranian currency.

In an interview Thursday with AFP, the vice-president of iran in charge of planning and budget, Mohammad Bagher Nobakht, spoke of the difficulties of the government to repatriate in Iran, the entire foreign currency from oil exports of the country.

“Some countries, such as India and China have established conditions for us to receive a portion of our oil revenues in the form of products of these countries. In general, things are not very fluid, but the situation is better than in the time of sanctions,” he said.

“Our main problem is the very heavy climate created by the United States to the european banks who do not dare to work with us,” he said.

By allowing the suspension of a part of foreign sanctions against the islamic Republic, the international agreement on the iranian nuclear issue concluded in July 2015 had created hope, in Iran, to an improvement of the economic situation, the arrival of foreign investors and especially an appreciation of the national currency.

The accession to power in January 2017, the american president Donald Trump, who is constantly denouncing the nuclear deal, and has hardened the u.s. position against Tehran, however, has strongly discouraged the foreign investors and major international banks.

Government officials, including president Hassan Rohani, have attempted in recent weeks to reassure the population about the rial but the authorities have been criticised for their passivity, and the absence of concrete measures.