The turnover of the broker, FxPro UK has increased by 64% in 2016 to reach 3.2 million pounds sterling, compared with 1.97 million pounds in 2015. The company generated a net profit of 1.1 million pounds, almost identical to that of last year.

The volumes of trading clients increased by 75% to reach 112 billion dollars for the year (or a monthly average of $ 9.3 billion) as against 64 billion in 2015.

FxPro UK has recently launched the spread betting for uk customers who use the new platform FxPro Edge and has signed a sponsorship agreement with the club to premier league Watford. Conor O’driscoll was appointed to the position of deputy director of the group, FxPro and director of operations in the United Kingdom. Mr. O’driscoll works with FxPro in Cyprus since 2012. He started as a commercial FX before being appointed deputy director in 2014.

The revenues and profits of FxPro UK only represent the transfers-to-business, because all of the trades executed in FxPro UK are sent to FxPro Financial Services Limited, the parent company based in Cyprus.

FxPro UK currently employs 12 people, up from 7 the previous year. 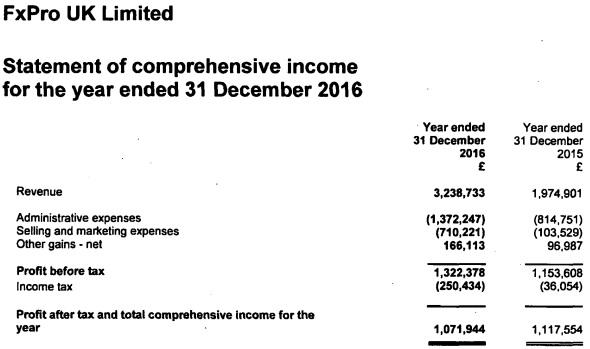